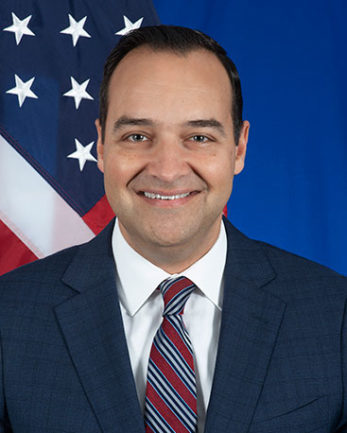 Term of Appointment: October 2019 to present

Ambassador Andrew Bremberg was nominated by President Donald J. Trump on January 16, 2019 to serve as the Representative of the United States to the Office of the United Nations and Other International Organizations in Geneva.  He was confirmed in that position by the U.S. Senate on October 22, 2019.

Mr. Bremberg has a long history of public service. Prior to this appointment, Mr. Bremberg served as Assistant to the President and Director of the Domestic Policy Council for the Executive Office of the President.  He previously served as Policy Advisor and Counsel on Nominations for the Office of Senate Majority Leader from 2014 to 2015.  He also worked for the non-profit MITRE Corporation as a senior health policy-analyst and department manager from 2009 to 2014 and for the Department of Health and Human Services from 2001 to 2009.

Mr. Bremberg earned a B.A. from Franciscan University of Steubenville in Ohio and a J.D. from Catholic University of America in Washington, D.C.  Mr. Bremberg and his wife Maria have four children and live in Virginia.