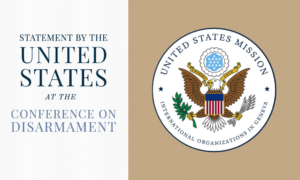 We welcome today’s opportunity to discuss Transparency in Armaments – or TIA. The United States has strongly supported the TIA concept since its inception and continues to do so.

Transparency is the foundation on which the international community can build trust, avoid misunderstanding and miscommunication whenever possible, and resolve issues that arise.

The TIA initiative arose at the end of the Cold War, when many of us questioned the relevance of a multilateral security agenda that focused exclusively on weapons of mass destruction and failed to address conventional weapons. The violent conflicts of the 1980s and Saddam Hussein’s invasion of Kuwait in 1990 pushed the international community into action. We had to balance the notion of the need for a system of transparency with the sovereign rights of states to defend themselves.

The negotiations were complex – even tortuous – but we persevered and successfully adopted UNGA Resolution 46/36L, “Transparency in Armaments” on December 6, 1991. In doing so, we created a two-track process. The first track established the UN Register of Conventional Arms. The second called for the CD to take up the subject.

By any measure, the UN Register has been a resounding success, establishing a global norm of transparency and accountability in military matters and reinforcing civilian control of the military. Since its establishment in 1992, more than 170 countries have reported to the Register at least once, and it is estimated that its reporting captures more than 90% of the international trade in conventional arms. Members participate from every UN regional group. The UN Register has been used as a foundation by the OAS and other regional organizations to build on and address regional security concerns. It also provided the starting point for the negotiation of the Arms Trade Treaty (ATT). The Register truly is a global confidence-building and transparency measure.

A series of Groups of Governmental Experts (GGEs) have been convened by the Secretary-General to review the Register’s operation and make recommendations on its further development. These GGEs led to the expansion of the Register to include additional weapons, with MANPADS and artillery between 75mm and 100mm being added in 2003, naval warships between 500 and 750 metric tons in 2006, and small arms and light weapons (SA/LW) and armed unmanned aerial vehicles in 2019. These substantive additions demonstrate the Register’s continuing vitality and relevance.

As a separate, parallel initiative, the Department of State also publishes on an annual basis the “World Military Expenditures and Arms Transfers,” which is a series of publications designed to be a convenient reference on annual military expenditures, arms transfers, armed forces, selected economic data, and relative indicators consisting of pertinent military-economic ratios. The aim is to provide the arms control and international security community with useful, comprehensive, and accurate data, accompanied by analyses and highlights.

Part of this decline can be ascribed to its very success as a global transparency measure with the rise of one of its progeny – the ATT, which was launched in 2008 with a UN GGE. The ATT built on the UN Register’s heavy weapons by adding SA/LW. This made the ATT more directly relevant to the security concerns of a greater number of States. However, in 2019, the Register responded to this by expanding to include reporting transfers of SA/LW.

There also has been some confusion over the relationship between the UN Register and the ATT. The ATT’s entry into force in 2014 appears to have led some of its States Parties to conclude that the ATT has made the Register superfluous, based on the assumption that a legally-binding treaty requiring reporting of international transfers trumps a voluntary confidence-building measure. They fail to recognize that the two instruments serve different purposes and actually complement each other. The ATT is intended to ensure that the international trade in conventional arms is conducted in a responsible manner; the UN Register is intended to help prevent excessive and destabilizing accumulations of conventional arms. States who are ATT State Parties should submit data to both the ATT and the UN Register – not just to one or the other.

The UN will convene another GGE in 2022, and a major focus of its discussions will be how to arrest the decline in national reporting and how to reinforce the Register’s role as a global confidence building measure promoting international peace and stability. The United States looks forward to this discussion.

Unfortunately, the Conference on Disarmament has not been able to do its part.

Our task was to “address as soon as possible, the question of interrelated aspects of the excessive and destabilizing accumulation of arms, including holdings and procurement through national production, and to elaborate universal and non-discriminatory practical means to increase openness and transparency in this field” and to “address the problems of, and the elaboration of practical means to increase, openness

and transparency related to the transfer of high technology with military applications and to weapons of mass destruction.”

No timeframe was specified for the CD’s work, but I have to believe that our predecessors would not consider 30 years to be “as soon as possible.”

The CD had a promising start on TIA. We added it in 1992 as the first new agenda item in over ten years and the first one directly related to conventional arms control. Informal meetings were held during the first year to introduce the CD to the subject. In 1993, the CD established the TIA Ad Hoc Committee, which began working to develop practical means for increasing openness and transparency in military matters.

Unfortunately, at that point things started to go off course. The Ad Hoc Committee split into two camps – those who wanted to discuss transparency in conventional weapons and those who wanted to discuss transparency in weapons of mass destruction. Despite discussing 16 working papers and a host of other suggestions, the Ad Hoc Committee was never able to bridge the differences to find common ground on concrete proposals.

In 1995, these differences spilled over into a general debate in the CD on the relationship between conventional and nuclear disarmament and the CD established just two Ad Hoc Committees that year – one on CTBT and the other on FMCT. CTBT negotiations proceeded, but unfortunately, despite the fact that the CD established an FMCT Ad Hoc Committee in 1995, the CD failed to select a chair and it was held hostage to agreement on the reestablishment of the TIA, NSA, and PAROS Ad Hoc Committees and on the establishment of a Nuclear Disarmament ad-hoc committee. The rest is history… that was the origin of the paralysis that afflicts this Conference today.

Fast forward to today, and we have reached the point that establishing any Ad Hoc Committee would be a demonstration of progress in the CD.

We would do well to remember that it was not always so – and that the motivating concept behind the Transparency in Armaments initiative is as valid today as it was then.

To that end, the United States continues to support the need for the CD to “elaborate practical means” to increase transparency, as we were tasked to do. We believe this topic is germane to all the core agenda items and should be included in discussions on all of them. To that end, we regret, again, that we could not even agree to informal discussions in Subsidiary Bodies this year.