All Nations Should Embrace Scrutiny of their Human Rights Records
By U.S. Mission Geneva
4 MINUTE READ 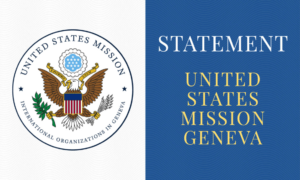 STATEMENT: All Nations Should Embrace Scrutiny of their Human Rights Records

On Honest Engagement with the UN Human Rights Council

During the 47th session of the UN Human Rights Council, the United States was proud to co-sponsor 13 resolutions on crucial human rights situations, deliver more than 35 national statements on key concerns, and co-sign 16 joint statements. The United States greatly appreciates the close collaboration with numerous partners, both states and civil society, throughout this session.

All UN member states should welcome and expect scrutiny of their human rights records; those elected to the Human Rights Council should expect – and welcome – even more of it. The United States recognizes that protecting individual freedoms in our nation and around the world is an ongoing process. The United States strives always to improve our own efforts through direct dialogue and candid criticism, domestically and from the international community. We engage thoughtfully and honestly at the Council and with the Office of the High Commissioner for Human Rights, and we have extended a standing invitation to UN experts to visit the United States. We also look forward to working with the Council’s new mechanism on racial justice and equality in the context of law enforcement.

Unfortunately, some States continue to reject the notion that a country’s human rights record is subject to international scrutiny. These States emphasize human rights problems outside their borders while rejecting and criticizing discussion of their own domestic human rights situations. Some even seek to impose economic and humanitarian costs on States that speak out about their concerns. Of particular concern is that some of these States, such as the People’s Republic of China, are piloting systems such as “social scoring” that could be used to implement social control at scale, imposing restrictions on individuals’ exercise of their human rights and fundamental freedoms, and subverting the rule of law by punishing, restricting, and publicly shaming individuals using opaque metrics against which there is limited recourse. These domestic and international tactics are unacceptable.

Our hope is that, collectively, we can lead efforts with partners and defenders of human rights globally to work together to prevent these abhorrent tactics and these States’ efforts to politicize the UN Human Rights Council. For ultimately, those who suffer are the individuals around the world whose voices are silenced in the face of such repression. This is why the United States looks forward to continued and increased engagement with the Council to address human rights abuses and violations wherever they occur.