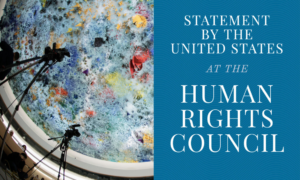 During the 47th session of the UN Human Rights Council (HRC), the United States co-sponsored 13 resolutions on crucial human rights situations including in Belarus, Eritrea, Ethiopia (Tigray), Syria, and Ukraine, and on important human rights issues, such as human rights on the internet, the negative impact of corruption on the enjoyment of human rights, efforts to eliminate violence against women and girls with disabilities, preventing maternal mortality and morbidity, and the human rights of migrants.

We delivered over 35 national statements on key human rights concerns around the world, including condemning abuses and calling for accountability in Belarus, Burma, Eritrea, Nicaragua, Syria, and Venezuela. Our joint statement on business and human rights—and the need for future efforts to build upon the success of the Guiding Principles on Business and human rights to enjoy genuine multistakeholder participation—garnered 50 co-sponsors from all regions of the world. We co-sponsored more than 16 Joint Statements, including a text we led with Norway reaffirming the UN’s role in promoting and defending democracy, which garnered signatures from 64 countries. We joined 43 countries in co-signing a Canada-led joint statement expressing concern over the People’s Republic of China’s human rights abuses in Xinjiang, Tibet, and Hong Kong. We also joined statements on the Freedom Online Coalition, disinformation and freedom of expression, violence against transgender women, female genital mutilation, sexual and reproductive health and rights, business and human rights, sport and human rights, and economic rights of women. We pledge to cooperate with the new mandate on systemic racism and law enforcement created this session.

As a general matter, we underscore that HRC resolutions are nonbinding documents that do not create rights or obligations under international law. HRC resolutions do not change the current state of conventional or customary international law and do not change the body of international law applicable to any particular situation discussed or referred to in a resolution. We do not read references in resolutions to specific principles, including proportionality and precaution, to imply that States have an obligation under international law to apply or act in accordance with those principles. Nor do we read resolutions to imply that States must join or implement obligations under international instruments to which they are not a party, and any reaffirmation of prior instruments in these resolutions applies only to those States that affirmed them initially. We understand abbreviated references to certain human rights in HRC resolutions to be shorthand references for the more accurate and widely accepted terms used in the applicable treaties or the Universal Declaration of Human Rights, and we maintain our longstanding positions on those rights. We also reiterate our long-standing position that the International Covenant on Civil and Political Rights (ICCPR) applies only to individuals who are both within the territory of a State Party and subject to its jurisdiction.

The United States strongly supports the condemnation of harassment, gender-based violence, excessive use of force, and other acts that can amount to human rights violations or abuses, but believes it is important for resolutions to accurately characterize these terms, consistent with U.S. law and our international obligations. We note that U.S. co-sponsorship of HRC resolutions does not imply endorsement of the views of special rapporteurs or other special procedures mandate-holders as to the contents or application of international law or U.S. obligations thereunder. Finally, the United States understands joint statements are intended to express the common belief of the States issuing the statement and not to create any legal rights or obligations under international law.

2030 Agenda for Sustainable Development: The United States recognizes the 2030 Agenda as a voluntary global framework for sustainable development that can help put the world on a more sustainable and resilient path and advance global peace and prosperity. We applaud the call for shared responsibility, including national responsibility in the 2030 Agenda and emphasize that all countries have a role to play in achieving its vision. The 2030 Agenda recognizes that each country must work toward implementation in accordance with its own national policies and priorities. We support the 2030 Agenda and are committed to working toward the achievement of its Sustainable Development Goals. The United States also underscores that paragraph 18 of the 2030 Agenda calls for countries to implement the Agenda in a manner that is consistent with the rights and obligations of States under international law. We also highlight our mutual recognition in paragraph 58 that 2030 Agenda implementation must respect, and be without prejudice to, the independent mandates of other institutions and processes, including negotiations, and does not prejudge or serve as precedent for decisions and actions underway in other fora. For example, the 2030 Agenda does not represent a commitment to provide new market access for goods or services. The Agenda also does not interpret or alter any World Trade Organization agreement or decision, including with respect to the Agreement on Trade-Related Aspects of Intellectual Property Rights. Further, citizen-responsive governance, including respect for human rights, sound economic policy and fiscal management, government transparency, and the rule of law, are essential to the implementation of the 2030 Agenda.

The “Right to Development”: The “right to development,” which is not recognized in any of the core UN human rights conventions, does not have an agreed international meaning.

Economic, Social, and Cultural Rights: As the International Covenant on Economic, Social, and Cultural Rights (ICESCR) provides, each State Party undertakes to take the steps set out in Article 2(1) “with a view to achieving progressively the full realization of the rights” and to guarantee, in accordance with Article 2(2), that the rights “will be exercised without discrimination of any kind as to race, colour, sex, language, religion, political or other opinion, national or social origin, property, birth or other status.” We note that countries have a wide array of policies and actions that may be appropriate in promoting the progressive realization of economic, social, and cultural rights. Therefore, we believe that these resolutions should not try to define the content of those rights. The United States is not a party to the ICESCR, and the rights contained therein are not justiciable as such in U.S. courts.

COVID-19-Related Measures: The ICCPR sets forth the conditions for permissible restrictions on certain human rights, including that any such restrictions must be in conformity with law and necessary in a democratic society for, inter alia, the protection of public health. The language in these resolutions in no way alters or adds to those provisions, nor does it inform the United States’ understanding of its obligations under the ICCPR. We also note that language in certain resolutions this session appears to construe emergency measures as meaning restrictive measures. However, not all measures responsive to this health emergency restrict the enjoyment of human rights; for example, many States, including the United States, have implemented measures aimed at improving care and providing economic support.

Justice and Accountability: The United States strongly supports calls for justice and accountability for human rights violations and abuses. We understand language regarding the responsibility of States to prosecute violations of international law and human rights abuses to refer only to those actions that constitute criminal violations under applicable law.

Right to Education: The United States strongly supports the realization of the right to education. As educational matters in the United States are primarily determined at the state and local levels, we understand that when resolutions call on States to strengthen various aspects of education, including with respect to access to quality education, curricula and textbooks, teacher training, materials, and methods, educational processes, and other areas and aspects of education, this is done in terms consistent with our respective federal, state, and local authorities. With respect to education references to private providers, we also understand them consistent with these respective authorities and underscore the importance of education as a public good but note that private providers can offer students a viable educational option. We support encouraging all providers to deliver education consistent with its importance as a public good and take seriously the responsibility of States to uphold legal standards and monitor and regulate education providers as appropriate.

Technology Transfer: The United States firmly considers that strong protection and enforcement of intellectual property provides critical incentives needed to drive the innovation that will address the health, environmental, and development challenges of today and tomorrow. The United States understands that references to dissemination of technology and transfer of, or access to, technology are to voluntary technology transfer on mutually agreed terms, and that all references to access to information and/or knowledge are to information or knowledge that is made available with the authorization of the legitimate holder. The United States underscores the importance of regulatory and legal environments that support innovation.

International Humanitarian Law: The United States is deeply committed to promoting respect for international humanitarian law (IHL) and the protection of civilians in armed conflict. We note that IHL and international human rights law are in many respects complementary and mutually reinforcing. However, we understand that, with respect to references in these resolutions to both bodies of law in situations of armed conflict, such references refer to those bodies of law only to the extent that each is applicable. We do not necessarily understand references to conflict, IHL, or IHL terms of art in these resolutions to mean that, as a matter of law, an armed conflict exists in a particular country or to supplant States’ existing obligations under IHL.

International Refugee Law: The United States strongly supports and advocates for the protection of refugees and other displaced persons around the world, and we urge all States to respect the principle of non-refoulement. In underscoring our support for this principle, we wish to clarify that U.S. international obligations with respect to non-refoulement are the provisions contained in Article 33 of the 1951 Convention relating to the Status of Refugees (applicable to the United States by its incorporation in the 1967 Protocol relating to the Status of Refugees) and in Article 3 of the Convention against Torture and Other Cruel, Inhuman or Degrading Treatment or Punishment. We note that we understand references to international refugee law in certain resolutions to be referring to the obligations of States under the relevant treaties to which they are party.

Sanctions: The United States does not accept that sanctions, in and of themselves, are tantamount to violations of human rights. Among other legitimate purposes, targeted sanctions can play an indispensable role in countering breaches of international law and in responding to human rights violations and abuses.

The United States greatly appreciates the close collaboration we enjoyed with numerous allies, partners, and likeminded countries during HRC 47. We look forward to continuing the effort to make lasting progress on promoting respect for human rights around the world; advancing these efforts intersessionally; preparing for the 48th Session of the HRC in September; and pursuing our candidacy for a seat on the Council for the 2022-2024 term.

List of resolutions co-sponsored by the United States at the 47th Regular Session of the Human Rights Council: