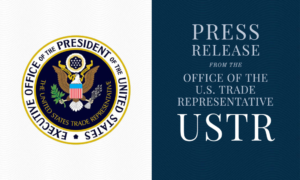 WASHINGTON – United States Trade Representative Katherine Tai today delivered remarks at a Ministerial-level meeting of the World Trade Organization (WTO) Trade Negotiations Committee. In her remarks, Ambassador Tai stressed the need for a meaningful outcome to the WTO fisheries subsidies negotiations to protect our oceans and fisheries resources, and to support our fishers and workers. In May of this year, the United States submitted a proposal in the ongoing negotiations urging WTO Members to address the global problem of the use of forced labor on fishing vessels.

The full text of Ambassador Tai’s remarks are below:

Question 1: To stop continued degradation of the world’s fisheries resources and of the economic activities and livelihoods that they support, can you, as Ministers, affirm your commitment to conclude the fisheries subsidies negotiations as soon as possible ahead of the 12th WTO Ministerial Conference, and confirm that the basic elements of the landing zones necessary to reach a conclusion are contained within the current draft text.


With respect to the first question – The United States is committed to working together with all WTO Members to finally reach a conclusion to these longstanding negotiations, but it must be a meaningful conclusion.

Protecting the sustainability of our fisheries resources and positively impacting our fishers and workers are critical for an outcome to be considered meaningful.

It is for precisely these reasons that WTO Members must ask whether the current negotiating text reflects the best that we can do after 20 years of negotiations.

Although it does include some of the basic elements needed to reach a meaningful conclusion, our work is not yet done, as other key elements are still missing.

And so, our answer to the first question, at this point, is “not yet”.  We do agree this text can serve as the basis for a Member-led, text-based negotiation, but it does not yet contain the elements required for reaching conclusion.

We, as Members, have an opportunity to show the world that the WTO can attain meaningful results.

And this is why, in addition to pushing for effective disciplines on the most harmful fisheries subsidies, the United States has proposed a targeted approach to ensure that highlighting and addressing the use of forced labor on fishing vessels are part of any outcome.

Forced labor is a serious problem in the fisheries sector. It is a practice that affects economic competition; it is an unfair trade practice and an unconscionable exploitation. Acknowledging it as such is an important way that the WTO can positively impact the lives and livelihoods of our fishers and workers.

There are other key elements missing from the current text, and we hope to have a text-based negotiation so these can be reflected in the text.

Significant shortcomings must be addressed if we are to successfully conclude these negotiations, and there is limited time before MC12.

Trade negotiations are hard work. Let’s do the hard work together to achieve the most meaningful outcome possible here. The United States is committed to continuing to work constructively with Members towards this goal.

Question 2: In this context, of particular concern for many developing country Members and LDC Members are their vulnerable fishing communities. For purposes of this negotiation alone, and without prejudice to any Member’s position on special and differential treatment in any other context, can we agree that the key component of special and differential treatment is for poor and vulnerable artisanal fishers in developing country Members and LDC Members?

With respect to the second question – We certainly agree that we must consider the potential impact of any future disciplines on our workers and fishers, including economically-disadvantaged communities that depend on fishing for their livelihoods.

These communities perhaps have the most to lose if Members fail to achieve a meaningful outcome that actually improves on the status quo and the sustainability of fisheries resources.

And while we must ensure that we address the legitimate needs and concerns of these communities, prohibiting the most harmful subsidies will be critical, in order to preserve the very resources on which they depend.  We will not be helping anyone if there are no fish in the oceans to catch.

However, these negotiations are about prohibiting harmful fisheries subsidies and should not result in an outcome that locks in the status quo or, worse, provides the WTO’s blessing to continue providing such subsidies – without regard to sustainability – in perpetuity.

The United States believes that a blanket approach with permanent carveouts is neither appropriate nor effective given the purpose of this agreement.

Moreover, it does not reflect the reality that some self-declared developing country Members are among the largest producers and subsidizers or among the wealthiest or more significant Members of this organization.

We are prepared to consider flexibilities for particularized situations that does not result in the pitfalls of a blanket approach.

Finally, is it enough to have an agreement for agreement’s sake? We firmly believe that collectively, we deserve and can achieve more.  WTO Members have the opportunity to produce an agreement that can make a serious and credible contribution to ending harmful fisheries subsidies.  Those subsidies enable the use of forced labor, and threaten the sustainability of our marine resources.

The United States wants a ‘win’ for the WTO, for the fish, and for our workers.  We believe it is within reach, but it will require ALL Members to make and support improvements to the text that will lead us to a meaningful outcome.

After 20 years, we owe it to our oceans and our citizens who depend on them to finally deliver such an outcome.