Remarks to the Conference on Disarmament on Agenda Item 5: Other Weapons Systems – Cyber
By U.S. Mission Geneva
6 MINUTE READ 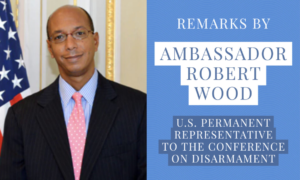 Remarks to the Conference on Disarmament on Agenda Item 5: Other Weapons Systems – Cyber

Ambassador Robert Wood’s remarks to the Conference on Disarmament

Let me also thank the panelists for their informative presentations.

Over the past 50 years, we have witnessed how the Internet, and all the interconnected digital technologies that make up cyberspace, have revolutionized how we innovate, learn, do business, and express ourselves. Today, more than half the world’s population is online and the Internet contributes trillions of dollars to the global economy.

Our reliance on an open, interoperable, secure and reliable Internet has only intensified during the COVID pandemic, as customary interactions were restricted on an unprecedented level. Societies continued to function – even thrive in many cases. It exemplified why we need a safe, secure, and accessible online environment.

The American vision of cyberspace reflects our democratic values and strives to be universally inclusive. The United States upholds the principle that international human rights apply online, just as they do offline. We build international cooperation to address shared challenges like malicious cyber activities by adversaries, cybercrime across borders, and malign influence in politics. The United States fosters an inclusive, multistakeholder approach to governing the Internet that prioritizes openness and innovation, working with the private sector and civil society.

Cyber-enabled threats have proliferated as our systems become increasingly interconnected. These threats range from state-sponsored attempts to target major critical infrastructure to the use of ransomware by cybercriminals to extort a single individual or hold hostage sensitive information.

Certainly, the ransomware threat is an urgent, complex national security matter that has been on the rise for years. Ransomware incidents have recently targeted our gasoline pipeline and meat supply chain. And such incidents are not just happening in America but around the world. Combatting ransomware is a top priority for our Administration; but we cannot confront this threat alone, which is why working with international partners and the private sector will be key.

We have also delivered the message that responsible states do not harbor ransomware criminals, and called on states to take decisive action against these ransomware networks. We will work with allies and partners on resiliency and to hold accountable nations that provide safe harbor to criminal ransomware actors.

We have also seen how authoritarian states have manipulated this space to suppress dissent and monitor populations in an effort to maintain ideological control.

We – the international community – must push back hard against states that seeks to exploit and undermine the open nature of cyberspace.

The United States relies on strong international partnerships as embodied in the UN’s global framework of responsible state behavior in cyberspace that preserves peace and reduces the risk of conflict.

For more than a decade, the United States has worked under the auspices of the First Committee with partners around the world to design and promote that framework at the UN, which has three key elements:

· First, it affirms that existing international law applies to state behavior in cyberspace;

· Second, it calls on all states to adhere to 11 voluntary, non-binding norms of behavior in cyberspace during peacetime;

· And third, it calls for the development and implementation of practical confidence-building measures to reduce the risk of conflict in cyberspace.

Over years, we have achieved consensus in the UN for advancing this framework in multiple forums. All UN Member States affirmed this framework in their adoption of the UN Group of Governmental Experts’ (GGE) consensus reports of 2013 and 2015 and most recently in the consensus report of the 2019-2021 GGE. The recent consensus affirmed the applicability of international humanitarian law in the context of States’ use of ICTs in armed conflict and provided additional guidance on the norms so States have a better understanding of how they apply.

It’s also worth noting the successful consensus of UN’s Open Ended Working Group on cyber. This group, the OEWG, was the first time a UN cyber negotiation was opened to all 193 member states. The international community stood together in endorsing the framework we worked hard to champion.

Do not be misled into thinking there are no norms or rules in cyberspace. There are important legal rules and politically imperative norms on state behavior in cyberspace that have been adopted by the international community, and they exist because the United States worked with our partners and adversaries alike for many years to forge consensus on what they should be.

In each of these forums, we advocate for the framework of responsible state behavior in cyberspace that remains the best path forward for stability and security in cyberspace.