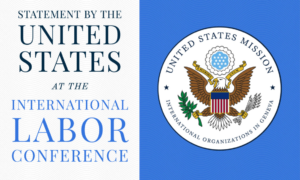 109th Session of the International Labor Conference, June 2021
Committee on the Application of Standards (CAS)


Statement of the United States Government
As Delivered by Ethel Moreno
U.S. Department of Labor

The ability of individuals to freely exercise the right to freedom of association is a cornerstone of healthy and functioning societies everywhere. The 2019-2020 public protests, including by trade union officials, highlight the challenges individuals continue to face in exercising these labor rights, human rights, and fundamental freedoms in Hong Kong.

Specifically, the recent observations of the Committee of Experts cite allegations of police repression and arrests in connection to these public protests, including the arrest of Hong Kong Confederation of Trade Unions (HKCTU) General Secretary, Lee Cheuk-yan in 2019.

In June 2020, the Law of the People’s Republic of China on Safeguarding National Security in the Hong Kong Special Administrative Region (National Security Law) came into effect. The Committee of Experts noted allegations that the law has been used to crack down on peaceful and legitimate protests. Further, we are aware of recent media reports that the Hong Kong authorities have used the Law to arrest individuals in the context of peaceful gatherings, including the arrests of then-HKCTU Chairperson Carol Ng and Hospital Authority Employees Association Chairperson Winnie Yu.

The authorities submitted information to this Committee in response to concerns of noncompliance with Convention 87, noting the National Security Law helped Hong Kong emerge from “chaos into stability.”

While the government credits the law with an 85 percent reduction in the number of people arrested for public order incidents in the first six months after the law came into force, this reduction correlates to a decline in public gatherings due to the imposition of the threat of arrest under the new law and the draconian enforcement of public order and public health regulations to restrict the right of peaceful assembly. The effect of the law has been to further suppress the exercise of the right to freedom of association, in stark opposition to obligations under the Convention.

We urge the Hong Kong authorities to take immediate action to meet its obligations under the Convention.