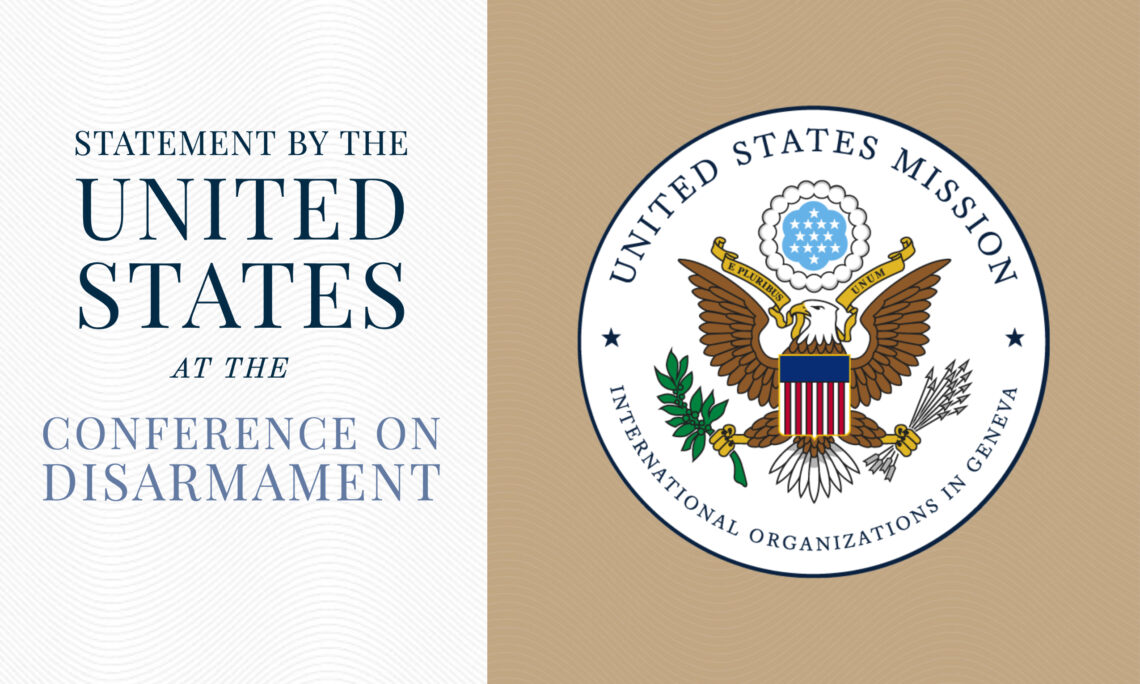 U.S. Deputy Permanent Representative
to the Conference on Disarmament

Conference on Disarmament Plenary Session on
Agenda Item 4: Effective international arrangements to assure non-nuclear-weapon States against the use or threat of use of nuclear weapons

The United States welcomes the opportunity to address the issue of security assurances, both “positive” and “negative.”

We acknowledge the critical importance of security assurances for States that have both forsworn nuclear weapons and abide by their nuclear nonproliferation obligations.

Such assurances are a key benefit derived from being a state party to the Nuclear Non-Proliferation Treaty and from fulfilling nonproliferation obligations.

The first assurances were established in 1968 by the United States, the United Kingdom, and the Soviet Union.  Each announced they would seek immediate UN Security Council action to provide or support assistance, in accordance with the UN Charter, to any NPT non-nuclear-weapon State that was victim to either aggression involving nuclear weapons or threatened by such aggression.

These “positive” security assurances were adopted in UN Security Council resolution 255, and in 1995, the P5 made security assurances that were noted in resolution 255’s follow on resolution 984.  984 also invited UN Member States to take appropriate measures in response to a request for technical, medical, scientific, or humanitarian assistance from a non-nuclear-weapon State that is victim of an act of aggression with nuclear weapons.

In addition to positive security assurances, non-nuclear-weapon States have sought assurances that nuclear-weapon States will not use nuclear weapons to threaten or attack them.  The United States offered its first “negative” security assurance in 1978, when Secretary of State Cyrus Vance addressed the First Special Session of the United Nations General Assembly devoted to Disarmament.

Since then, the United States has gone further, including as part of our 2010 and 2018 Nuclear Posture Reviews, which state: “The United States will not use or threaten to use nuclear weapons against non-nuclear weapons states that are party to the NPT and in compliance with their nuclear non-proliferation obligations.”

The United States has also signed the relevant protocols to the Treaties of Rarotonga, Pelindaba, and Semipalatinsk – and submitted them to the Senate for its advice and consent for ratification.

The United States has also long supported nuclear-weapon-free zone treaties in other regions across the world as a way for States to improve the security environment in their respective regions.

These treaties reinforce the NPT and the global nonproliferation regime, and advance disarmament on a regional basis.

The principles and guidelines on the establishment of nuclear-weapon-free zones adopted by the United Nations Disarmament Commission in 1999 include the central principle that such zones be established on the basis of arrangements freely arrived at among all States of the region concerned.

The United States reaffirms its strong support for nuclear-weapon-free zones that meet these criteria.