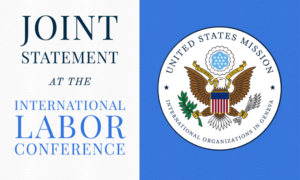 Committee on the Application of Standards (CAS)

Joint Statement of the United States and Canada

As Delivered by
Ethel Moreno
U.S. Department of Labor

I am speaking on behalf of the governments of the United States and Canada.

The ILO supervisory bodies have consistently monitored the Government of Belarus’s application of Convention 87 in follow-up to the findings of the 2004 Commission of Inquiry. After 17 years, the Government has yet to address the underlying issues and recommendations covered by the Commission. At the same time, new issues have emerged.

The Committee of Experts notes with concern that recent developments constitute a retreat by the Government from its obligations under the Convention. The Committee reports the use of extreme violence to repress peaceful protests and strikes, and the detention, imprisonment, and torture of workers while in custody. Government interference in the activities of trade unions continues, as evidenced recently by a high-level official who expressed a preference for a particular trade union while making a televised statement.

Respect for worker rights in Belarus has deteriorated in both law and practice. We urge the Government of Belarus to fully implement all measures recommended by the ILO supervisory bodies, in particular:

The Government of Belarus needs to take immediate action to resolve these longstanding issues. To that end, we strongly urge the Government to avail itself of ILO technical assistance to ensure full compliance with its obligations under Convention 87.