Statement by the United States on WHO Executive Board Membership
By U.S. Mission Geneva
3 MINUTE READ 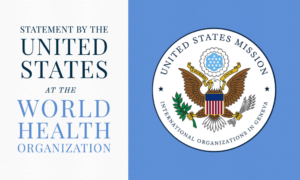 World Health Organization
149th Session of the Executive Board

Statement by the United States on WHO Executive Board Membership

As Delivered by
Amy Norris White

The United States had the honor of serving on the WHO Executive Board for the last three years.

Unfortunately, we have grave concerns that Governments of two new Board members, Belarus and Syria, do not share these values, as demonstrated by its respective human rights violations and abuses against its own citizens — as overwhelmingly condemned by the international community. In particular, we note Syria’s track record of conducting chemical weapons attacks harming civilians and striking medical facilities as well as first responders.

The United States takes this opportunity to reinforce the expectation of members of the Executive Board and calls on the Governments of both Belarus and Syria to respect human rights.

We also call on Syria to allow for the unimpeded access of life-saving humanitarian aid, including medical supplies regardless of where those in need are located.