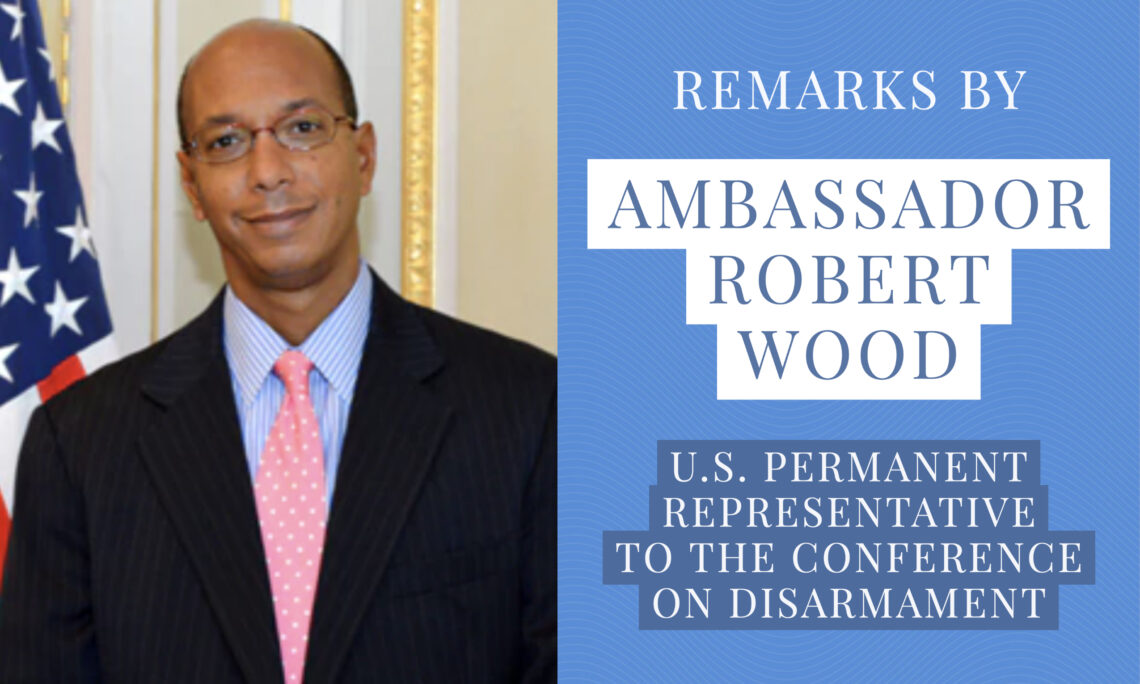 Thank you, Mr. President. Let me first congratulate you on assuming the Presidency of the CD. My delegation assures you of our support. And thank you for convening our first thematic debate of the CD session. I also wish to thank the panelists for their very informative presentations.

Mr. President, as Secretary Blinken said when he addressed this body on February 22, our predecessors worked together, despite their differences to try to make the world a safer place. Nowhere is that more – and less – true than in the critical area of disarmament verification and that is what I intend to focus on today.

On one hand, we have our cornerstone, the Nuclear Non-Proliferation Treaty, and bilateral treaties like New START, both of which have robust verification obligations and long records of strong compliance.

On the other hand, we see the danger posed to us all when a state stops complying with its verification obligations.

By and large, NPT Parties take their treaty obligations seriously and work closely with the IAEA to verify their compliance.

The United States certainly falls into that category, and we are proud to maintain our record of compliance with the NPT.

We call on those states that are not in compliance with their verification-related obligations under the NPT to take the necessary steps to comply with those obligations.

Turning to New START, the United States and Russia have adhered to our obligations – despite all our many other differences. We hold each other accountable through the treaty’s verification regime. Extending New START undoubtedly makes the world safer.

Extending New START ensures we have verifiable limits on Russian ICBMs, SLBMs, and heavy bombers until February 5, 2026.  These numerical limits prevent Russia from increasing the number of nuclear weapons mounted atop missiles that can reach the United States in roughly an hour or less.

New START’s verification regime enables us to monitor Russian compliance with the treaty and provides us with greater insight into Russia’s nuclear posture, including through onsite inspections that allow U.S. inspectors to have eyes on Russian nuclear forces.  And New START’s verification regime provides the Russians with analogous monitoring capabilities, promoting mutual confidence and stability.

The United States will use the time provided by a five-year extension of the New START Treaty to pursue with Russia, in consultation with our Congress, allies, and partners, arms control that addresses all Russian nuclear weapons, including novel strategic systems and non-strategic nuclear weapons.

President Biden and President Putin have agreed to explore strategic stability discussions on a range of arms control and emerging security issues.  We are in the process of preparing for these discussions.

Since 2014, the United States, through a public-private partnership with the Nuclear Threat Initiative, has led the International Partnership for Nuclear Disarmament Verification – or IPNDV. The Partnership brings together more than 25 states, with and without nuclear weapons, under a cooperative framework to further understanding of the complex challenges involved in the verification of nuclear disarmament.

In the six years since the Partnership began, more than 100 experts have engaged in collaborative work to develop potential solutions to these challenges. This work is detailed in more than 50 reports and papers outlining procedural and technical mechanisms to address some of the most complex verification challenges, such as the dismantlement of nuclear warheads.

The Partnership is a prime example of U.S.-supported “effective measures” that help to create the environment for future nuclear disarmament and demonstrates our commitment to Article VI of the NPT.

Mr. President, let me close by reminding us all that verification is a well-tested tool to build trust. The cooperation between technicians and scientists who carry out verification is often the building block on which further cooperation is built. We must encourage those who have potential verification methods to continue, and expand, their work, including working cooperatively with others.

Effective verification is a critical component of any arms control or disarmament treaty. Verification measures must be robust. They must be feasible. That is how we build lasting agreements that can improve our security.

I ask that we all keep these truths in mind as we look forward to the NPT Review Conference and continue work in this body and beyond to further strengthen verification by commencing long-overdue negotiation of a verifiable Fissile Material Cutoff Treaty.