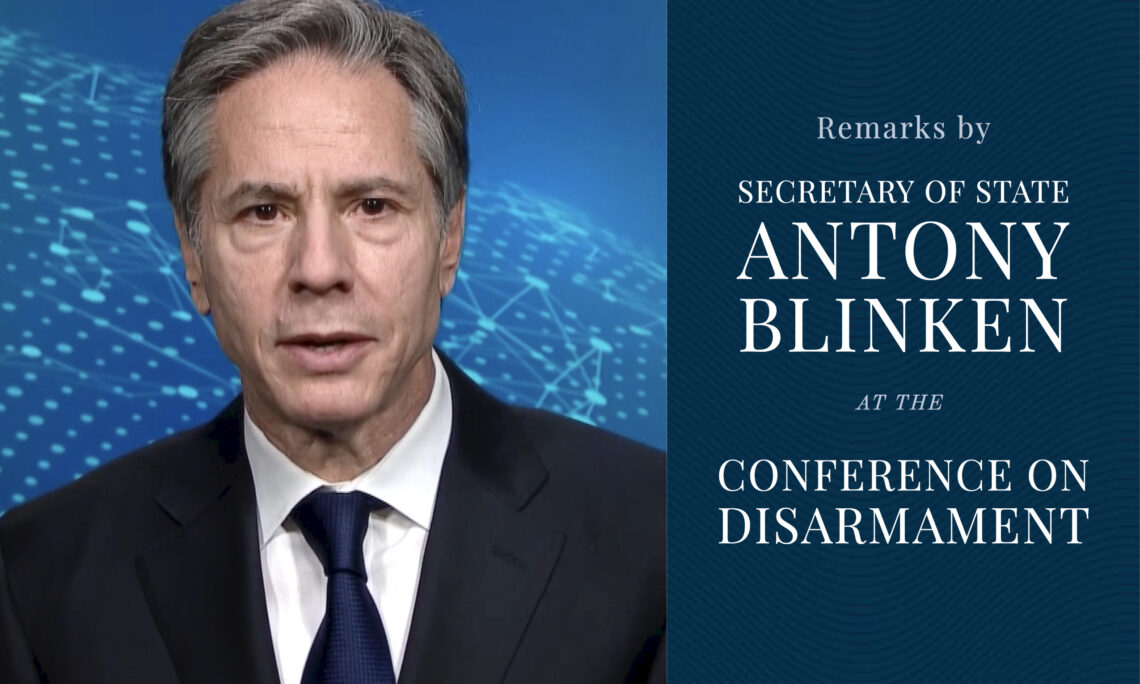 Secretary of State Antony J. Blinken
Remarks at the High-Level Segment of the Conference on Disarmament

My thanks to the President and Secretary-General, distinguished representatives, and Ambassador Wood and the American delegation for their work on behalf of the United States.

This body has a responsibility to create new tools to address 21st-century threats – and to protect what we have built together.

President Biden has made it clear: the United States has a national security imperative and a moral responsibility to reduce and eventually eliminate the threat posed by weapons of mass destruction.

For decades, President Biden has worked to protect and advance the international arms control and non-proliferation architecture – and the institutions that underpin it – by shepherding treaties through the Senate, engaging in diplomacy, and advocating for risk reduction measures.

Just two weeks after he took office as President, the United States and the Russian Federation extended New START for five years. That decision made our countries and the world safer, and it was only the beginning of our efforts to address nuclear threats.

The United States is ready to engage Russia in strategic stability discussions on arms control and emerging security issues. We will be clear-eyed about the broader challenges posed by Russia and how our respective nuclear arsenals represent existential threats to each other.

Working with our allies and partners, the United States will also demand greater transparency regarding China’s provocative and dangerous weapons development programs, and continue efforts aimed at reducing the dangers posed by their nuclear arsenal.

Further, we want to engage all countries, including Russia and China, on developing standards and norms of responsible behavior in outer space. The Conference on Disarmament has already held discussions on space security and is uniquely positioned to help lead. I urge states that are developing anti-satellite weapons to refrain from dangerous testing of such systems. For example, contrary to Russia’s diplomatic and public stance against the weaponization of space, Russia conducted a ground-based anti-satellite test in December 2020. We should be reducing tensions in outer space, not making them worse.

The United States remains committed to ensuring that Iran never acquires a nuclear weapon. Diplomacy is the best path to achieve that goal. President Biden has said: if Iran comes back into strict compliance with the JCPOA, the United States is prepared to do the same. Working with allies and partners, we will also seek to lengthen and strengthen the JCPOA and address other areas of concern, including Iran’s destabilizing regional behavior and ballistic missile development and proliferation. And Iran must comply with its safeguards agreements with the IAEA and its international obligations.

The United States also remains focused on denuclearization of North Korea and will work closely with allies and partners to address Pyongyang’s illicit weapons of mass destruction and ballistic missile programs.

Mr. President, our predecessors worked together, despite their differences. They understood that threats posed by weapons of mass destruction are not limited by national boundaries. And so they negotiated landmark treaties that guard against the worst impulses of human nature.

One such treaty, the Chemical Weapons Convention, has been the paragon of verifiable arms control and disarmament agreements. It is now under duress. Syria has repeatedly used chemical weapons against its own people and failed to cooperate with the Organization for the Prohibition of Chemical Weapons to fully disclose and verifiably destroy its chemical weapons program. Russia has provided Syria diplomatic and military assistance to continue this destructive behavior. And Russia has used chemical weapons to try to assassinate its own citizens, including opposition leader Alexsey Navalny last summer and former intelligence officer Sergey Skripal and his daughter Yulia in March of 2018. That attack happened in the United Kingdom and British civilians were killed and injured. We condemn such actions and call on Russia and Syria to comply with their CWC obligations. There can be no impunity. We must preserve international law against the use of chemical weapons – or we risk normalizing their use.

We must also refocus on reducing the threat of disease and biological agents as weapons. We urge countries to begin now toward a constructive outcome as we prepare for the upcoming Biological Weapons Convention Review Conference.

Last year marked the 50th anniversary of the Treaty on the Non-Proliferation of Nuclear Weapons entering into force. The NPT’s near universality is an achievement we should all celebrate. The United States is committed to advancing the nonproliferation and disarmament goals of the NPT, as well as increasing cooperation on the peaceful uses of nuclear energy. We look forward to the tenth Review Conference and will do our part to make it a success.

Mr. President, we must move beyond our differences to address shared threats. As a first step, it’s finally time to negotiate a treaty banning the production of fissile material for use in nuclear weapons. And of course, there’s so much more to do.

If we idle and ignore our mandate, we fail the people of all countries, we fail our children.

I pledge that the United States is here to work, cooperate, and once again use the Conference on Disarmament to create bold, innovative agreements to protect ourselves and each other. We hope you will be our partner in these efforts.