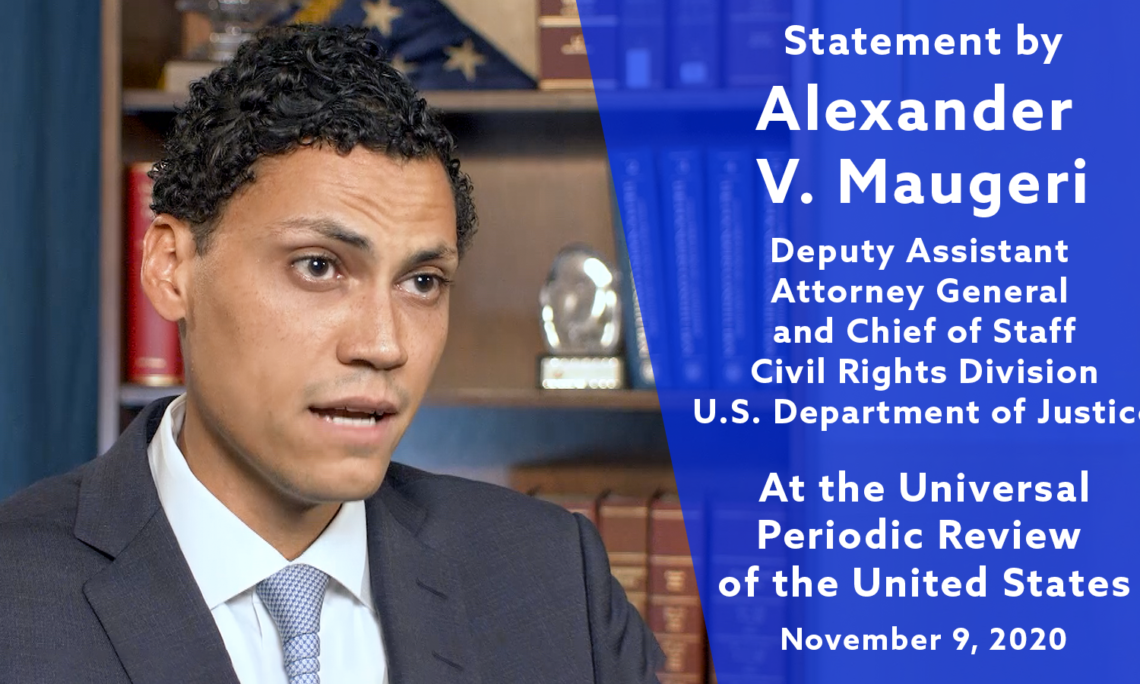 I’m Alexander Maugeri. I’d like to speak briefly about issues related to conditions of detention.

The United States Constitution, along with federal and state laws, establishes standards of care to which all inmates are entitled.

The Federal Bureau of Prisons, or BOP, meets its constitutional and statutory mandates by confining inmates in prisons and community-based facilities that are safe, humane, and appropriately secure.

BOP meets the needs of prisoners with mental illness by ensuring proper diagnosis and treatment, as well as ensuring discharge planning services.

The Civil Rights Division is currently pursuing matters involving allegations of misuse of solitary confinement at the state and local levels throughout the country.

BOP has also taken significant measures to reduce risks and mitigate the impact of the COVID-19 pandemic. BOP consults on an almost daily basis with the Centers for Disease Control and Prevention to ensure BOP is implementing best practices based on science and sound judgment.

BOP began aggressively screening the inmate population for inmates who could serve out their sentences in residential reentry centers, also known as halfway houses, or Home Confinement.

Regarding sentencing, in December of 2018, President Trump signed the First Step Act, the most significant federal criminal justice reform in several decades.

As the President noted, “this legislation reformed sentencing laws that have wrongly and disproportionately harmed the African-American community. The First Step Act gives non-violent offenders the chance to reenter society as productive, law-abiding citizens.”

The First Step Act also includes retroactive application of the Fair Sentencing Act of 2010, which reduces the sentencing disparity between offenses involving powder cocaine and crack cocaine; shortens mandatory minimum sentences for some nonviolent drug offenses and firearm offenses; and increases opportunities for judges to deviate from mandatory minimums when sentencing for non-violent drug offenses. States are now also following the federal government’s lead with regard to sentencing reform.

The United States has laws, at the federal level and in just over half the states, which authorize the death penalty for the most serious crimes, within constitutional limits and consistent with U.S. international obligations.

The U.S. judicial system provides an exhaustive system of protections at both the federal and state levels to ensure that the death penalty is not applied in a summary, arbitrary, discriminatory, or inhumane manner, and that its implementation is undertaken with meaningful procedural safeguards, after access to multiple layers of judicial review, in conformity with the U.S. Constitution, federal law, and U.S. international obligations.

The Justice Department continues to take great precautions to ensure decisions to seek the death penalty at the federal level are not based in any way on factors that include race or national origin.

Any criminal defendant who alleges that the application of the death penalty was racially motivated may challenge such sentencing in court.

Regarding gun violence, the Second Amendment to the United States Constitution protects the individual’s right to keep and to bear arms. Federal, state, and local governments are therefore limited in how they can regulate the possession of firearms. At the same time, the United States is working to ensure criminals who use firearms in committing their crimes are pursued and appropriately punished.

For example, in November 2019, the Attorney General started Project Guardian, a new initiative to reduce gun violence and to enforce federal firearms laws.