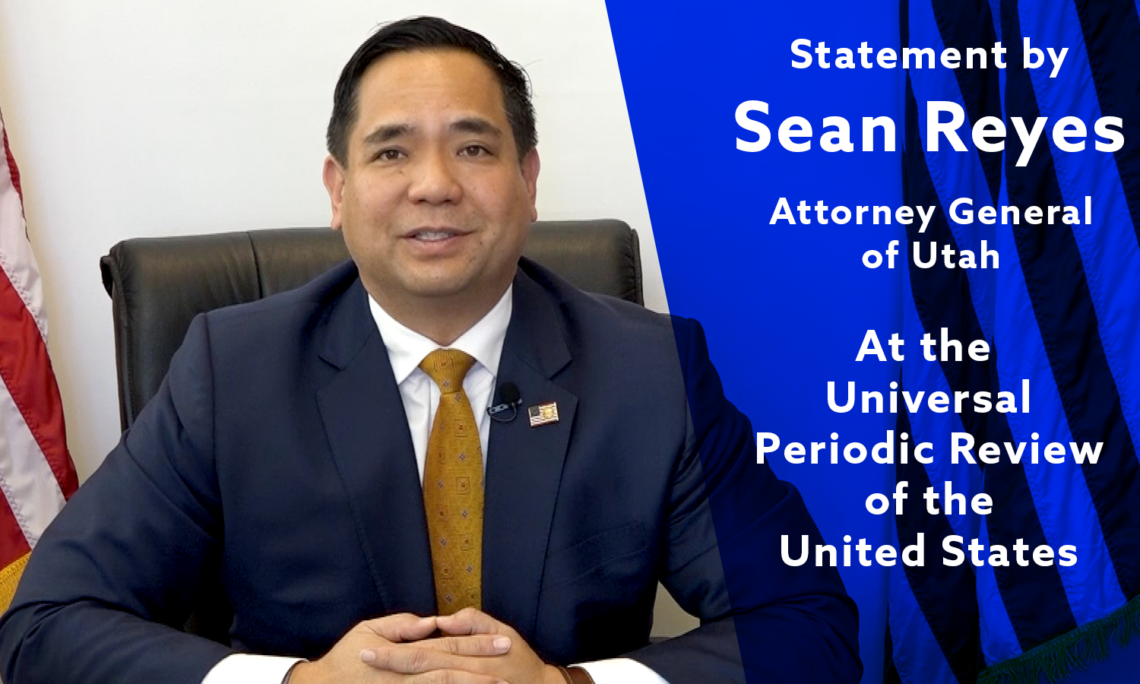 My name is Sean Reyes, and I serve as the elected Attorney General for the state of Utah. Each state in America has an Attorney General (or “AG”) who acts as the most senior lawyer for state government and enforces civil laws. Many of us in the role of AG also enforce criminal laws, including laws that protect human rights.

My state of Utah is in the western United States and is known for its diverse geography of deserts, forests and mountains. It is a clean, quiet and beautiful state with a population of almost 3.5 million people. It’s capital, Salt Lake City, has hosted international events such as the Winter Olympic Games.

The first settlers of what is now Utah were indigenous peoples representing many Native American tribes. Over the course of our state and national history, various human rights deprivations have occurred against first nation people, at times under the authority of law, sometimes in spite of relevant laws and often in the absence of laws to protect their interests.

On the other hand, certain laws and policies have been effective at bolstering indigenous human rights. For example, a federal law known as the Indian Child Welfare Act favors keeping indigenous children with their families and tribes even under difficult financial and health situations so long as the children are not neglected, abused or endangered.
This federal policy carefully balances the welfare of the child with their inherent right to be raised in their native culture and traditions.

Another indigenous rights issue with near universal support by states and the federal government is assisting Native American nations in the prevention of human trafficking among indigenous women. The Trump Administration recently announced tens of millions of dollars to support indigenous women survivors of trafficking.

The history of Utah recognizes a second group of settlers in the mid 1800’s—pioneers who came West across the vast expanse of central plains to escape religious persecution. These pioneers were predominantly members of the Church of Jesus Christ of Latter-day Saints (also known as Mormons), who colonized not only Utah, but thriving settlements in the West in states like Arizona, Nevada, Idaho and California.

These pioneers had faced extermination orders, murders, arson, and sundry human rights deprivations in the East and Midwest United States due to their religious beliefs and practices. In short, hate chased them from their homes until they finally found sanctuary in the West.

Just a few years ago, the Utah legislature followed the example of other states in passing a hate crimes bill allowing more stringent punishment in the form of enhancements for crimes we prosecute that are predicated on animus due to religion, race or other factors. It is a powerful tool to combat those who terrorize others based on violence and hate.

Utah’s population has grown more rapidly over the past decade than any other state in the United States. With Utah’s strong growth and global cultural and economic connections, the state has an increasingly diverse population.

I, myself, am the son of an immigrant father and proud descendant of Hawaiian, Filipino, Japanese, Spanish and Chinese heritage. I am also the first statewide elected official from any minority community in Utah history. While this is a great honor for me, it does not come without its occupational hazards.

I and my family have received physical and hate filled threats because of my heritage. So, I am particularly attentive to issues regarding race. Add to that my role as the state’s top law enforcement official, and I believe I act as a bridge in the current national discussion of police reform.

Like the rest of the nation, Utah has had demonstrations by large groups of citizens protesting racial injustice or excessive police force.

The Utah Attorney General’s Office has taken significant steps to respond to and prevent incidents of excessive police force. Since the 2014 racial protests in America, our office has been a leader in providing violence de-escalation training designed to teach officers to defuse potentially dangerous situations and avoid using force, and particularly deadly force, if at all possible.

We have trained nearly 4,000 local, state and federal officers in an immersive virtual reality system called Vir-Tra, re-creating high stress, confrontational scenarios with hundreds of different outcomes depending on the officer’s reactions, including school shootings, hostage rescues, domestic violence cases or even everyday interactions with citizens on the street.

The curriculum trains officers to interact with diverse racial populations as well as the disability community or those with autism, addictions or dealing with other mental or behavioral challenges.

We believe systematizing and scaling training locally and nationally is one way to address human rights concerns of citizens interacting with law enforcement.

Like many of my AG colleagues, since I entered office in 2013, I have made it a priority of my administration to combat human trafficking. With estimated profits of $32 billion per year, human trafficking is by most accounts the fastest growing global crime and second only to drug trafficking in profitability. It is estimated there are anywhere from 20 to 40 million or more victims of modern slavery worldwide—1 in 4 victims are children.

Human trafficking takes on many forms – sex exploitation, forced labor, human organ harvesting, illegal adoptions and others. Modern-day slavery often does not use physical chains or confinement. Instead, force, fraud or coercion enslave victims through threats or fear of retribution from traffickers, including threats to the victims’ families.

Human trafficking is a worldwide problem, and Utah is not immune.
Our office handled one of America’s largest trafficking cases on record involving an international gang leader who was a both a drug and human trafficker. We ended his reign of terror that lasted over fifteen years in quiet suburbs of Salt Lake City during which he caused the sexual abuse of hundreds of young men and forced them to sell his drugs in schools throughout the state.

In another case, we set up one of the largest U.S. domestic stings of illicit massage parlors spanning multiple Utah counties and took down a vast network of illegal businesses that enslaved women brought from Asia and forced them into the sex trade.

Grants from the US Department of Justice have been vital in funding Utah’s efforts to liberate victims and prosecute predators of human trafficking.
Utah has also changed many laws to better protect victims and survivors, provide aftercare and recovery services, and empower survivors with educational and job opportunities.

These are just a few examples of how Utah, like other states in our nation, is at the forefront of protecting human rights.