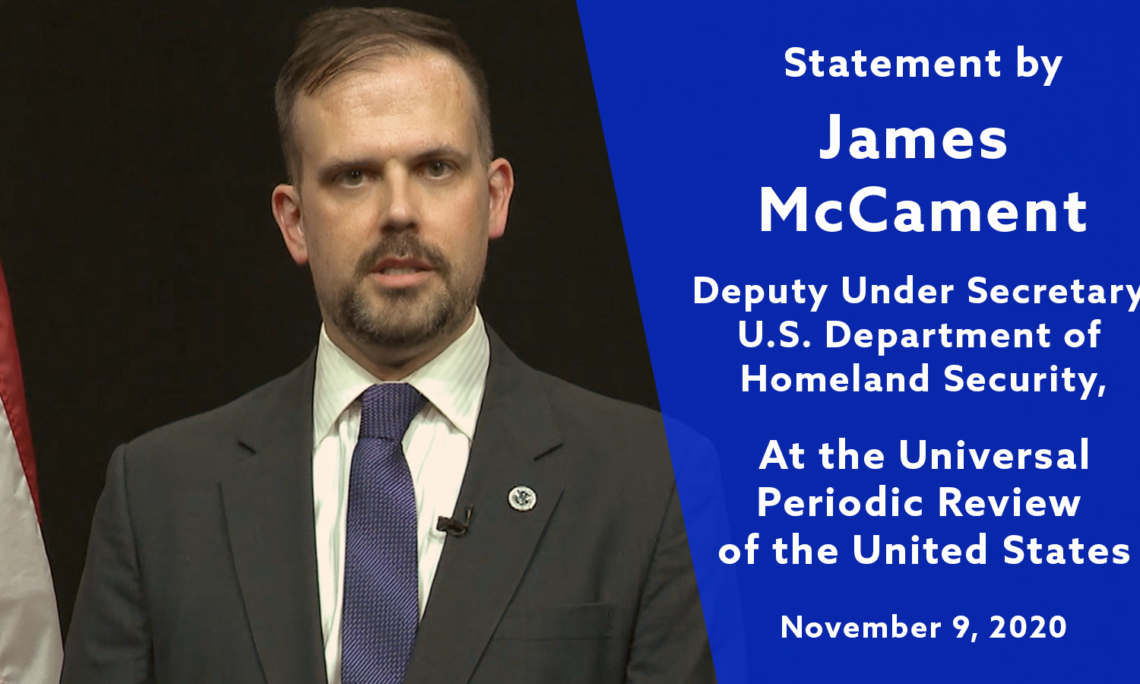 Thank you. My name is James McCament and I am the Deputy Under Secretary of the Office of Strategy, Policy, and Plans for the U.S. Department of Homeland Security.

For those of you who are not familiar with it, the Department of Homeland Security is bound by one mission: to safeguard the American people, our homeland, and our values from all threats, all the time—both today, tomorrow, and in the months and years to come.

DHS supports the U.S. Government’s commitment to upholding and advancing the promotion and protection of human rights and fundamental freedoms around the world. And DHS is committed to supporting the United States’ international obligations, including actions with international partner countries and organizations.

Today, I want to highlight for this body a few of the ways that DHS protects the rights of Americans and those seeking humanitarian protection in the United States.

It was with alarm and disbelief this year that we saw violent anarchists, violent opportunists, and criminals set fire to many U.S. communities, kill innocent people, assail private property, and target our law enforcement officers. In some communities, the U.S. has seen nightly violence perpetrated against law enforcement. This constant assault against those who protect us cannot and will not stand.

We must not forget that citizens of these communities were suffering in the wake of economic dislocation caused by the onset of the COVID pandemic . This violence has wreaked havoc on their local economies, and honest, hardworking Americans just want to get back to work.

DHS will always defend Americans exercising their right to peacefully protest. But those who seek to undermine our democratic institutions, indiscriminately destroy businesses, and attack law enforcement officers and fellow citizens are a threat to our values, and we must take action.

While the Department is committed to protecting the Homeland in its interior, we are equally focused on threats emanating from outside our borders.

DHS takes seriously its role in ensuring proper implementation of U.S. immigration laws. This is a matter of protecting both the rights of Americans and foreign nationals in the United States.

As President Trump has said, mass illegal migration is unfair, unsafe, and unsustainable for everyone involved: the sending countries and the destination countries. The receiving countries are overburdened with more migrants than they can responsibly accept. And sometimes the migrants themselves are exploited, assaulted, and abused by vicious “coyotes” – the criminal human smugglers.

Recent years have seen a humanitarian and security crisis along the U.S. southern border with Mexico due dramatic increase in the number of aliens we have encountered.

From 2017 through 2019, the United States saw a record number of illegal aliens entering our country largely for economic reasons, as we do still today. Remember, it was just a short time ago in 2019 that the United States recorded several months when over 100,000 illegal aliens each month crossed our borders and were released into our communities.

The Administration secured unprecedented cooperation with partners like Mexico and the Northern Central America countries to stem the flow of illegal immigration and entered into border security arrangements with some of these countries to collaborate in disrupting and dismantling cartels responsible for human trafficking and drug smuggling.

Together, DHS and our foreign partners are developing a safer and more prosperous region.

Although the number of migrant encounters dipped at the beginning of the COVID-19 pandemic, it has now returned to pre-pandemic levels.

Along with these recent increases in overall encounters, DHS continues identify those who claim fear of persecution or torture when apprehended or encountered by DHS.

These new asylum claims added to the lengthy backlog of pending asylum claims in the U.S. system – now over 1.1 million individuals.

This backlog of pending asylum claims undermines the integrity of the asylum system. It delays the grant of asylum to individuals who are legitimately fleeing persecution and have valid claims. Further, such delays are a pull factor for illegal immigration. By providing protection from removal, they create an incentive for those without lawful status to enter and remain in the United States.

Additionally, DHS maintains a cadre of professionally trained asylum officers to review applications and protection requests from aliens who have a fear of persecution or torture.

There have been some questions about protecting against COVID-19 in detention, so let me turn to that now.

U.S. Immigration and Customs Enforcement (ICE) tests all new detainees arriving at its detention facilities as part of the normal intake processing.

Anyone who tests positive or exhibits COVID-19 symptoms during this period, or at any other time while in ICE custody, is referred for appropriate medical care.

And even in the mist of this pandemic, DHS has continued asylum processing.

This is just a small sample of the DHS efforts to protect the health and safety of all individuals in this pandemic.

I’m proud to witness our unique authorities and talented workforce mesh—and together, fulfill our mission—to safeguard the American people, our homeland, and our values.