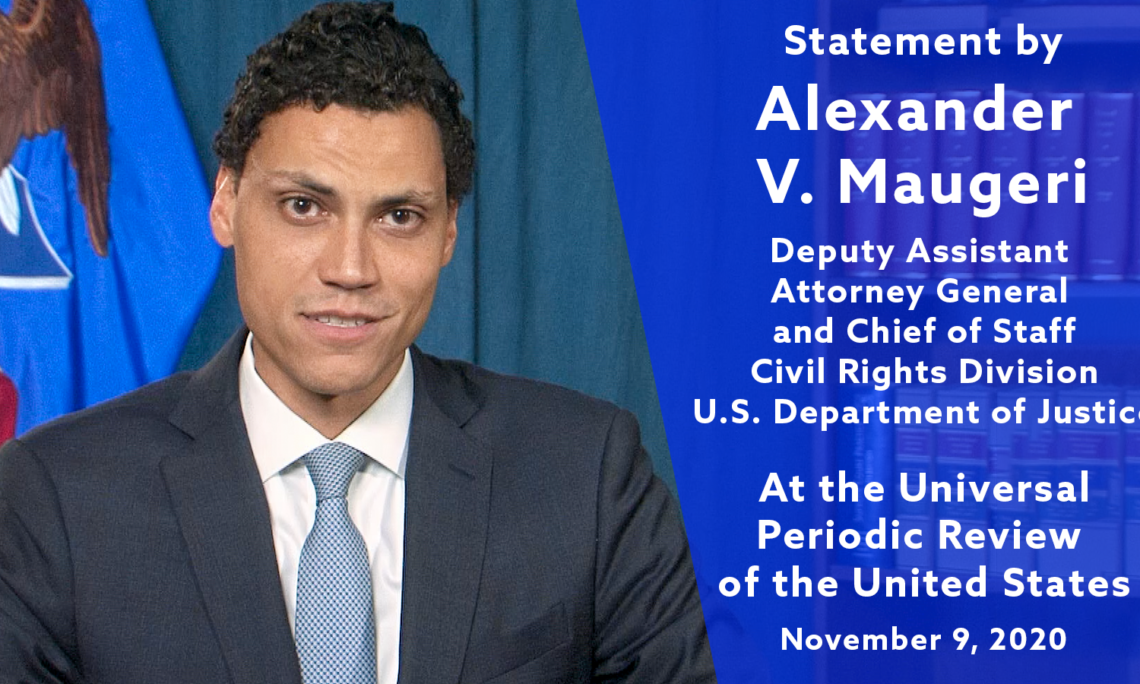 My name is Alexander Maugeri. I’m Deputy Assistant Attorney General and Chief of Staff for the Civil Rights Division at the United States Department of Justice.

A number of Member States have expressed concern about the use of force in policing and its impact on members of minority groups.

One of America’s greatest strengths is its commitment to the rule of law, and the Justice Department will never waver when it comes to preserving order and protecting life and liberty.

The rule of law protects all people, regardless of their position in life; their social status; their wealth or poverty; their race, color, or religious creed. The rule of law also makes us all equal.

Two serious challenges to the rule of law currently confront the United States.

The first challenge is a long-standing one but was recently crystallized by the tragic death of George Floyd in Minneapolis, Minnesota, and other recent events.

The government in the State of Minnesota has filed second-degree murder and manslaughter charges against one officer, and aiding and abetting charges against three other officers for the death of Mr. Floyd.

The United States Department of Justice is conducting an independent investigation into whether the death of Mr. Floyd involved violations of civil rights laws at the national, or the federal, level.

While the vast majority of police officers do their job bravely and righteously, it’s undeniable that some police officers have not lived up to their responsibilities, which has led some, including some in the African-American, or black, community, to have less confidence in our criminal justice system.

Our Constitution mandates equal protection of the laws, and nothing less is acceptable. In fact, our United States Department of Justice was founded 150 years ago with a founding charge to protect the civil rights of black Americans, including by prosecuting the Ku Klux Klan. We stand committed to upholding that responsibility today.

Unfortunately, the aftermath of George Floyd’s death has produced a second challenge to the rule of law.

As Attorney General Barr has said: “[T]he Constitution protects the right to speak and assemble freely, but it provides no right to commit violence or to defy the law.”

While many have peacefully expressed their anger and their grief, others have hijacked protest to engage in lawlessness—violent rioting and arson, looting of businesses and public property, assaults on law enforcement officers and innocent people, and even the murder of a federal agent.

Nonviolent protest has been a hallmark of American life for generations, including in pursuit of civil rights, and where protests give way to violence or destruction, we will hold the offenders accountable.

A number of Member States raised concerns about discrimination and excessive force in policing.

Where there is misconduct by police officers or law enforcement agencies, state and federal law provide remedies.

For example, in fiscal years 2017 through 2020, the Justice Department charged nearly 250 defendants—including police and other law enforcement officers—with willfully violating rights protected by the United States Constitution or with related offenses such as conspiracy or obstruction and obtained convictions of more than 170 defendants for violations of civil rights while exercising their official powers (what are known as “color of law” offenses).

As of January 2020, the Justice Department had opened 70 civil investigations since 1994 into police departments that might be engaging in a pattern or practice of conduct that deprives persons of their rights, such as the excessive use of force, improper searches, or improper stopping of persons.

We seek to proactively prevent discrimination or the use of excessive force by participating in training of federal, state, and local law enforcement officers across the country.

On June 16, 2020, President Donald J. Trump signed an Executive Order entitled “Safe Policing for Safe Communities” to develop and incentivize critical policing reforms. The Executive Order directs the Attorney General to create a credentialing process on which police departments’ eligibility for federal grants will depend.

Credentialing will be contingent on those departments having policies and training regarding use-of-force and de-escalation techniques; on performance management tools, such as early warning systems that help to identify officers who may require intervention; and on best practices regarding community engagement.

The President’s June 16 Executive Order also directs the Attorney General to create an information-sharing database to track information related to the excessive use of force, including such information as the termination or decertification of law enforcement officers, criminal convictions of law enforcement officers, and instances in which an officer under investigation related to the use of force resigns or retired.

Additionally, the Justice Department’s newly announced National Response Center will help law enforcement officers adapt to the wide range of challenges they face every day, from violent gangs, illegal guns, and lethal drugs to civil unrest, decisions about the use of force, and the complex social problems such as addiction and mental illness they are so often called on to resolve. This National Response Center will be available to local law enforcement across America to help them develop and to implement best practices for constitutional and lawful policing.

Hate crimes have a devastating effect beyond the physical injury inflicted on the targeted victim. They reverberate through families, through entire communities, and across the nation, as people fear that they, too, could be targeted simply for who they are.

The United States does not, however, criminalize speech, expressive conduct, or publication or advocacy of ideas, even those that others find extremely offensive or harmful. Nor do U.S. laws prohibit membership in groups that advocate such ideas.

To prohibit or prosecute peaceful speech or memberships in such groups would violate America’s Constitution, specifically its First Amendment. The rights to speak, to publish, associate, and petition the government for a redress of grievances—each protected by the First Amendment—would be at risk if governments in the United States could punish individuals because of differences of opinion, or if government could prohibit speech on the basis of its content or the speaker’s viewpoint.

However, we can (and do) act when hateful expression turns into discrimination or violence, threats of violence, or solicitations to commit violence.

Our network of civil rights laws—forged through our own civil rights struggle dating back, at least, to the 19th Century and the period of Reconstruction following our Civil War—deter and punish those who disrupt the ability of others to live free of discrimination and violence.

For example, on June 28, 2019, James Fields was sentenced to life in prison after pleading guilty to 29 violations of the Matthew Shepard and James Byrd, Jr. Hate Crimes Prevention Act for driving his car into a crowd of counter-protesters at the 2017 “Unite the Right Rally” in Charlottesville, Virginia, which killed one woman and injured more than 30 peaceful protesters.

That’s just one example of the efforts the United States is undertaking to safeguard our Constitution and our other civil rights at home. Thank you.