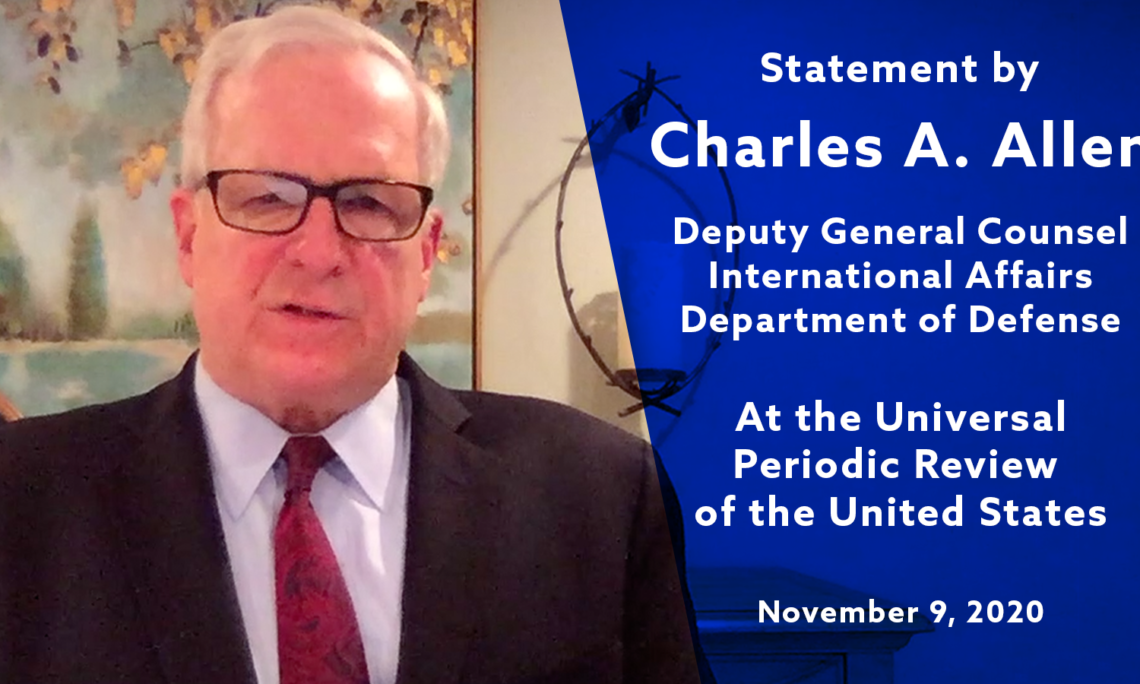 I’m Charles Allen, and I serve as Deputy General Counsel for International Affairs at the U.S. Department of Defense. Respect for universal values, including the rule of law, is a core interest for the United States at home and around the world. The Department of Defense complies with the law of war, and has an effective program to implement the law of war’s requirements in military operations.

Nothing in my remarks should be understood to depart from well-known U.S. views on the principle that the law of war is the lex specialis with respect to armed conflict. As such, it is the controlling body of law with regard to the conduct of hostilities and the protection of war victims.

First, I’d like to turn to some of the questions raised about the U.S. detention facilities at Guantanamo Bay.

The United States has no current plans to close these facilities. Executive Order 13823 of January 30, 2018, Protecting America through Lawful Detention of Terrorists, requires these detention operations to continue to be conducted consistent with all applicable U.S. and international law.

Only 40 individuals remain detained there.

Since 2015, 68 individuals have been transferred from Guantanamo to other countries. Before each transfer, the United States received assurances from the receiving governments that the detainee would be treated humanely after transfer.

The United States takes very seriously its responsibility to provide for the safe and humane care of detainees at Guantanamo Bay. These detainees receive high-quality medical care, comparable to that received by U.S. military personnel serving at Guantanamo.

We provide the International Committee of the Red Cross access to detainees, and DoD has worked closely with the ICRC to increase opportunities for Guantanamo detainees to communicate with their families.

All Guantanamo detainees may file habeas corpus petitions in U.S. Federal court challenging the lawfulness of their detention. Detainees have access to independent legal counsel and to appropriate evidence for this purpose.

In addition, eligible detainees receive periodic reviews to assess whether their detention remains necessary to protect against a continuing significant threat to the security of the United States.

With respect to military commissions, ongoing proceedings at Guantanamo incorporate fundamental procedural guarantees that meet or exceed the fair trial safeguards required by Common Article 3 and other applicable law and are consistent with those in Additional Protocol II to the 1949 Geneva Conventions as well.

I’d like to turn next to address the issue of torture.

Let me reiterate that the United States does not permit its personnel to engage in acts of torture or cruel, inhuman, or degrading treatment of any person in its custody regardless of the location or circumstances. We take vigilant action to prevent such conduct and to hold any perpetrators accountable for their wrongful acts.

The Detainee Treatment Act of 2005 prohibits cruel, inhuman, or degrading treatment or punishment of any “individual in the custody or under the physical control of the United States Government, regardless of nationality or physical location.”

The U.S. Army Field Manual on interrogation lays out the standard for the U.S. Government in ensuring lawful and humane interrogations of individuals detained in armed conflict.

I’d like to turn next to questions relating to our military and counterterrorism operations, as well as related questions of accountability.

We take scrupulous care to ensure that our operations are conducted in accordance with all applicable domestic and international law, in particular, the law of war.

The longstanding policy of the U.S. military is to investigate alleged law of war violations by U.S. forces for which there is credible information.

The Department of Defense has multiple accountability mechanisms in place to ensure that its personnel adhere to the law of war and other applicable requirements. This includes prosecutions under U.S. law, where appropriate.

The rights embedded in the Constitution of the United States begin with the First Amendment, which guarantees the five freedoms of speech, religion, press, assembly, and petitioning the government.

At times, governors of individual States deploy National Guard personnel to support law enforcement agencies to help maintain law and order so that other Americans can exercise their rights, free from violence against themselves or their property. It is not something National Guard personnel seek to do, but it is their duty, and they do it with the utmost skill and professionalism.

We continue to believe that the option to use active duty U.S. military personnel in a law enforcement role should be exercised only as a matter of last resort as specified by law, and only in the most urgent and dire of circumstances.

To conclude, I hope I’ve been able to demonstrate our nation’s dedication to universal values including the rule of law.