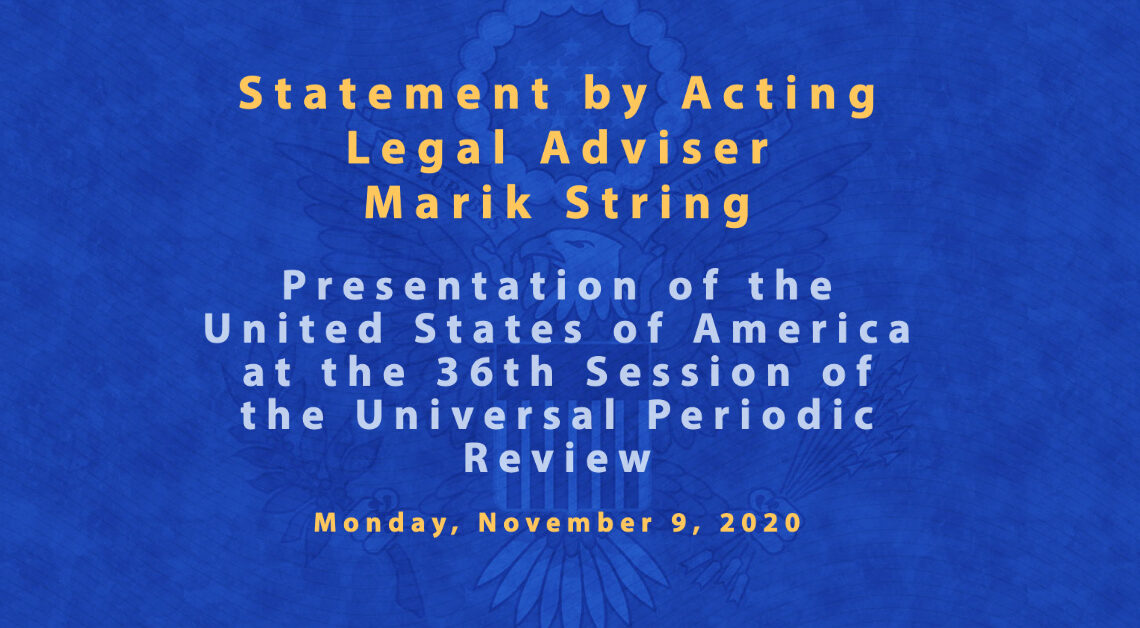 Distinguished President, Representatives of the UN Member States, my name is Marik String; I am the Acting Legal Adviser at the U.S. Department of State.  On behalf of the United States, it is my honor and privilege to address you all as part of the Third U.S. Report in conjunction with the UPR.

The United States strongly supports this process, which, consistent with the purposes of the United Nations as set forth in the UN Charter, provides a clear example of how international cooperation can promote and encourage respect for human rights and fundamental freedoms for all.

The United States is proud of its human rights record, and we are committed to strengthening and deepening human rights protections within our country in the continuous pursuit of a more perfect union.  We welcome your suggestions in this regard.

Let me first address the suggestions raised by a number of States about treaty ratification and reservations.

We are already, as a nation, party to many human rights treaties.  We take our obligations under those treaties very seriously and are committed as a government, to their good faith implementation.

The importance of treaty obligations within our domestic system is enshrined in our founding documents.  In particular, the U.S. Constitution provides that “Treaties made, or which shall be made under the Authority of the United States, shall be the supreme Law of the Land; and the Judges in every State shall be bound thereby.”

It is because of the great weight that we place on complying with our treaty obligations that we engage in an exhaustive process of considering any potential U.S. ratifications, across multiple branches of government.  The reasons for not ratifying a treaty can depend on the specific treaty at issue and the results of this process.

Of particular note is the role the United States Senate plays.  In accordance with the U.S. Constitution, our Executive Branch decides whether to sign a treaty and then our Senate has the sole authority to provide its advice and consent to ratification through an affirmative vote by two-thirds of Senators.

In addition, that the United States has not ratified a particular human rights treaty should not be regarded as a proxy for the importance we attribute to the rights recognized therein.  In many cases, our domestic protections are even stronger than such treaties require.  For example, while we have not yet ratified the Convention on the Rights of Persons with Disabilities, few other countries have adopted stronger laws, policies, and programs designed to protect the rights of persons with disabilities.

While underscoring that the United States has a sovereign prerogative to decide which treaties to ratify, we welcome suggestions with respect to exploring whether and how to ratify additional treaties.

Let me next address the issues raised by a number of member states about our domestic implementation efforts.  We are committed to effective implementation of our human rights obligations and welcome continued input on how to improve it.

The federal government continuously engages with state, local, tribal, and territorial governments on our human rights obligations, and has sought their involvement in human rights treaty reports and presentations.

To demonstrate the ways in which sub-national governments contribute to U.S. human rights implementation, we are joined today by Attorney General Sean Reyes from the State of Utah.

With that, I’d like to turn the floor over to him, to speak a bit more about state-level efforts.  Thank you.