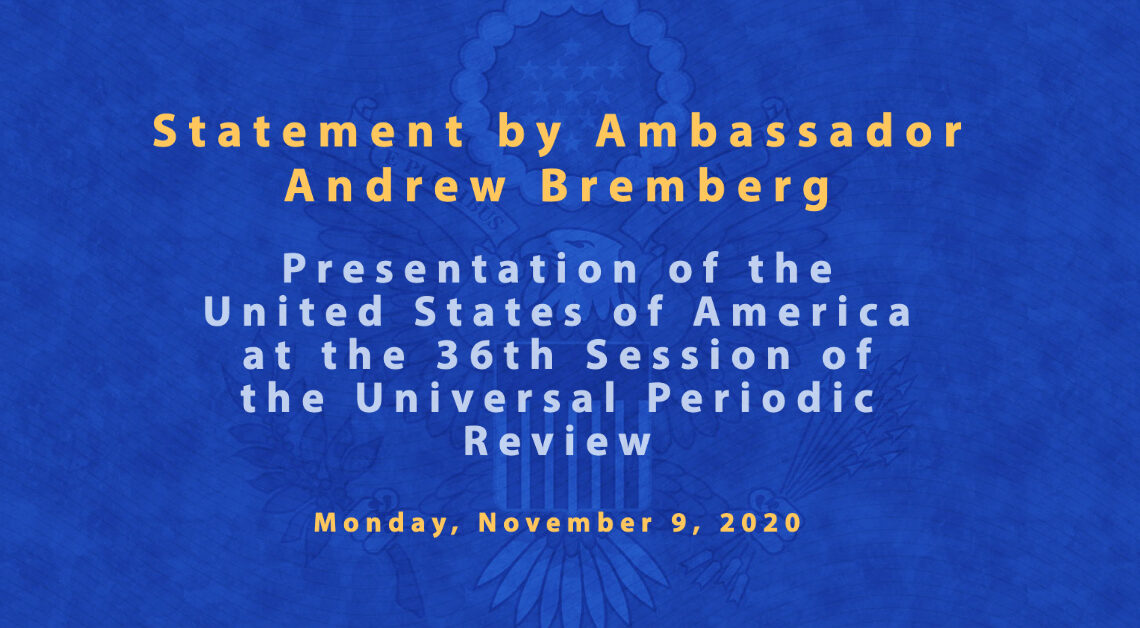 Good afternoon. Thank you Madame President. Members of the Troika, and distinguished representatives from UN member states, on behalf of the United States of the America, it is my honor and privilege to address you at this third cycle of the Universal Periodic Review.  The United States is pleased to participate in the UPR process, which we see as an extension of our longstanding tradition of respect and leadership for human rights globally.

Today I am joined — virtually — by my fellow members of the U.S. delegation, representing various departments and agencies across the U.S. government, who are participating either live or via pre-recorded messages from the United States.

The United States is immensely proud of its human rights record.  Our commitment to human rights rests on a firm political and moral commitment to accountability and transparency.  Our state and federal judiciaries are independent of political control, and our legislators and elected officials are held answerable to the public through a free press, a robust civil society, and regular free and fair elections.

And indeed, we are seeing this very process play out right now.

It is our most solemn belief that every person across the globe is born free and equal in dignity and rights, and is entitled to respect for his or her unalienable human rights and fundamental freedoms.  As such, at home and abroad, we continue to advocate for the universal freedoms of religion, speech, including for members of the press; and for the rights of individuals to peaceably assemble, and to petition their government for a redress of grievances.

For example, pursuant to a 2017 Executive Order, the U.S. Attorney General released a memorandum on religious liberty protections in U.S. federal law that guides all federal executive departments.  Earlier this year the United States launched the International Religious Freedom Alliance, joining 25 other member states in advancing freedom of religion or belief around the world.  And just last month, Secretaries Pompeo and Azar led the U.S. in joining 32 countries to sign the Geneva Consensus Declaration, a declaration of support for defending life and protecting the family.

In addition, Secretary Pompeo established the first of its kind Commission on Unalienable Rights, with the purpose of providing advice to the Department of State on human rights grounded in our nation’s founding principles and the principles of the 1948 Universal Declaration of Human Rights.  The findings of the Commission’s report will serve as a foundational document for those who, along with the United States, seek to champion the defense and protection of human rights around the world.

Our nation was built on the desire to “form a more perfect union,” and this same desire inspires our efforts to confront the challenges of today.  Indeed, the strength of our democratic system is that it allows for continuous scrutiny, advocacy, and debate, which fuels progress and reform.

As we witness a time of unprecedented degradation of human rights by authoritarian governments around the world, it is more important than ever to stand up to defend human rights and fundamental freedoms.  We do so today by demonstrating that we welcome transparency and constructive criticism, we are willing to openly acknowledge our shortcomings, and are proud of our constant striving to improve.

I will now turn the floor to my co-head of delegation participating live from Washington, DC., Assistant Secretary for the Bureau of Democracy, Human Rights, and Labor at the U.S. Department of State, Mr. Robert Destro.  Following him will be a presentation from Alexander Maugeri, Deputy Assistant Attorney General and Chief of Staff of the Civil Rights Division at the U.S. Department of Justice, to address some of your questions on civil rights.