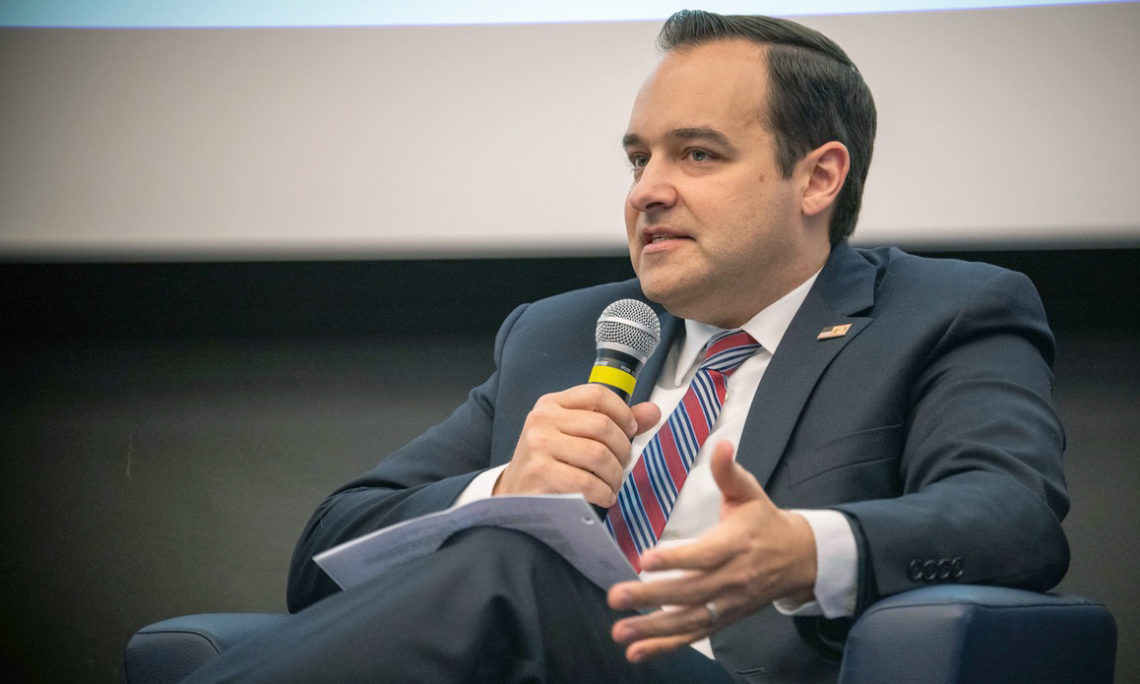 by U.S. Ambassador Andrew Bremberg
Permanent Representative to the Office of the United Nations and Other International Organizations in Geneva

Thank you for the invitation and the opportunity to speak with all of you today. In particular I want to thank our tremendous Director-General, who I think really set the stage in his opening remarks. And I found the Minister’s comments extremely interesting.

From our perspective, the UPU obviously must change with the world.  And I’m so glad the Director-General went through so much of the chronology and history, so I can dispense with some of that.  From our perspective – and I think the Minister was just eluding to this –  the UPU must open itself up structurally.  It is not really a question of if, or should, but how and when.

Perhaps 20 years ago it may have seemed to be a question of “if.”  I know one of my predecessors laid out a vision on this about 20 years ago at the first meeting of the high-level group, when he explicitly stated that the U.S. was committed to the UPU and desired for it to be the premiere organization in the world leading postal issues more broadly.  And that for it to do that, reform was essential and that the UPU had to provide maximum entry opportunities for all stakeholders, ensure fairness to all competitors, and above all provide consumers with valuable benefits.

I think from my perspective there is an aspect of why, and there is a question of how.  And I think the Director-General really laid out the importance of the why, and I think I will add briefly to it that these were all comments and observations made 20 years ago at the dawn of ecommerce.  But now we have seen first-hand the why. The incredible benefits – economic and lived benefits – that speedy, timely and more affordable access to goods from around the world can provide to consumers.

I would also say a word about producers, the importance of more efficient and effective delivery systems and mechanisms that can really democratize and bring to producers in small communities around the world greater access to international markets. So, I think the why is incredibly important in terms of what its ultimate impact is on individual people’s lives.  From a UPU perspective, it may be a necessity of systematic survival in terms of where we see the growth of postal needs and the postal system more broadly and that while it may have been ahead of its time if a decision had been taken 20 years ago, every four years as the Director-General laid out this was a challenge put forward that has not yet been addressed.  I think from our perspective it’s a question of well, a decision if we can collectively make one now, may be late, but better late than never, and it is not too late. And I think really in keeping with what the Minister set out.

A little bit more about the how:  how does this play out, what does this look like?  I don’t think this is actually as overly complicated and or potentially disruptive or scary as some people may think.  Many UPU members have already taken steps to achieve these objectives domestically, including in their privatizing postal services and working through regulators to promote and provide fair competition in markets for delivery of services.

We have already seen this happening in many places around the world.  And our challenge now, internationally, is how do we make these similar types of reforms at an international level that finds a meaningful way for postal sector operators to participate in the work of the UPU itself, and enabling them to play a role in the single postal territory comprising UPU member states.

In my view this challenge is actually quite equal and complementary to a challenge that the UPU just tackled this last year, with incorporating self-declared terminal dues for small packets into its rate-setting.  Obviously from the US perspective, once again, this was an issue that we had identified as a policy issue for structural reform over the years.  And we felt it was a long-standing and overdue reform that needed to take place.  So, from our country’s perspective, we chose to take a stand because of the ongoing distortionary impact that the old system was having.  And we greatly appreciate the incredible support from the international community and other member states that we received in this effort over the course of this last year, and the flexibility that member states showed in our discussions and negotiations which resulted in, I think, an extraordinary achievement of the victory option in Geneva just this past fall.

I’m convinced that this is a positive for the organization and countries, and that more than that is a signal that the UPU is ready and willing to adapt to market changes and realities and that we can work together to achieve specific discrete reforms.   And I think we could do so actually relatively quickly. In fact, the substantive change that was achieved last year, not just that it shows that we can do this work, but also the substantive change actually makes it easier for the UPU to open up.

Given the fact that we have been able to break some of these old orthodoxies this last year at the Geneva congress, we should be similarly ambitious or in hope and scope for what we think can be done this next year. And specifically identifying how the union can effectively interact with private-sector and other non-traditional partners in and with designated operators so can be more agile.  I don’t want to be overly prescriptive, obviously, because they do this is an ongoing discussion that is taking place. We look forward to the observations from the task force. But I think there’s tremendous work that can happen between now and August.

I do want to reiterate that the value of the broad principles that my predecessor identified decades ago are still critical for us today. I would encourage us all to think beyond opening the UPU simply up to products and services to the broader community.  I’m not sure that approach measures up to the real challenge and structural questions we face right now. That is not to say that I think this will be easy.  I was very glad that the DG specifically raised this. There are very serious public policy questions that we all individually and collectively have to grapple with in answering how we integrate this in into a revitalized UPU system.  Obviously, the universal service obligation, I think, is kind of chief among them. While that will take effort, I don’t actually believe it will take a tremendous amount of time. The level of skill and dedication that we have seen in the international postal community in the UPU over the past year shows how vibrant the community is, and the real creativity that can be brought to addressing these challenges.

I want to keep my comments extremely short to enable more questions and answers and discussion.  But I think we all must know that we have to come to terms with reality.  To remain relevant, the UPU needs to make a leap forward that many of us have already begun to make or have made domestically and we must now make in cooperation internationally in the UPU system.  I think I’d just end with, we will hear the comments today, we look forward to the report from the Director-General and the task force. We have several months ahead before we go to the Congress in August.  We should focus on having achieved by then an agreed upon goal, an agreed upon vision or end state of what do we want this to look like for the UPU, so that we ensure that coming out of that we have action, we have an actionable resolution that will call for and put forward an action plan for specific next steps about how we get there.  This will not happen overnight, it will take time to implement and transition, but I think from a policy making perspective we can make substantial progress very quickly this year.  So I’ll stop there for now and look forward to our further conversation.