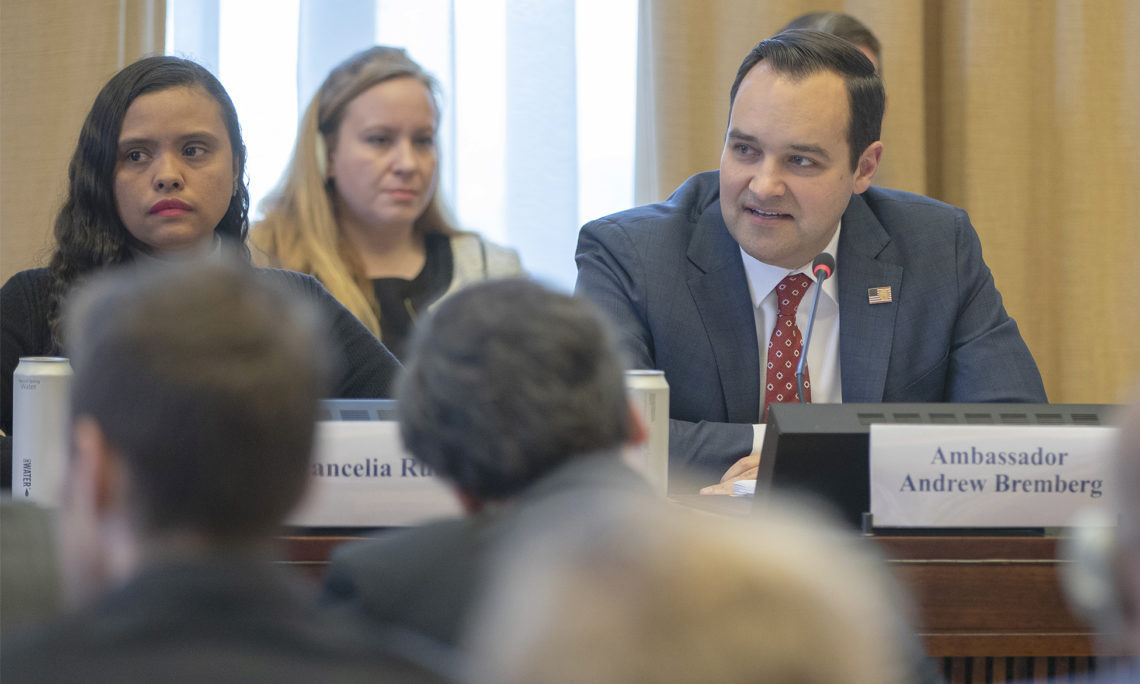 Demolishing Democracy:  Threats to Free and Fair Elections in 2020

Opening Remarks
As prepared for delivery by Ambassador Andrew Bremberg

Thank you all for joining us today.  We warmly welcome our distinguished guests, media representatives, and, most importantly, our courageous panelists who will be speaking today about threats to Venezuelan democracy.

And I would like to thank our co-hosts, Brazil and the Czech Republic, for their support in bringing the crisis in Venezuela to your attention as we begin 2020 – a year which still presents the opportunity to provide the Venezuelan people with what they have been demanding for years: genuinely free and fair Presidential and National Assembly elections to choose their leadership and begin the long process of renewal.

I hope everyone has had a chance to see President Trump’s State of the Union address from last night, where interim President Guaidó honored us with his presence.

President Trump restated the United States’ full support for the democratic actors of Venezuela, embodied by the bold and courageous leadership of interim President Juan Guaidó. As we begin today’s discussion of the importance of elections in Venezuela in 2020, I urge you all to remember that there are Venezuelans ready and willing to carry the democratic mantle, and lead the country into a new era of genuine governance by the people, for the people.

I must admit, however, that the year did not start off well.  It was exactly one month ago today that the Maduro regime sent armed militants to the National Assembly to forcibly prevent legitimately elected representatives opposed to Maduro’s rule from entering the building, in a failed attempt to override the legitimate functioning of Venezuela’s last remaining democratically elected institution.

These events on January 5, and a further failed attempt two days later to prevent access to the National Assembly, are the latest examples of the extremes to which Maduro will go to prevent democracy.

Though we look to the year ahead with optimism, we are fully aware of the challenges in store.  We expect Maduro will continue to attempt its malign goals of persecuting and harassing democratic actors, including President Guaidó, undermining the National Assembly, and empowering a Potemkin opposition to draw support away from his real opponents, in order to hold unfair and unfree parliamentary elections later this year.  These are not conditions for free and fair elections, and the root of this crisis is the regime, not the National Assembly.    The way out is by giving the people a vote, to decide who their leadership will be – free, fair presidential elections.

The United States, Brazil, and the Czech Republic are hosting this event today because we believe it is critical to understand the stakes at play in 2020 – and to understand what the conditions must be for elections that the international community can truly support.

What are those conditions?

Venezuelan elections must also be open to all parties and candidates.  To ensure this, we must see:

Looking toward the environment in which elections take place, the Maduro regime must not be allowed to dictate the content of independent media actors.  This includes guaranteeing the rights of peaceful assembly and freedom of expression without repression, reprisal, or politically motivated disruptions of service.

The United States is grateful for the forceful response from the international community in the immediate aftermath of January 5, including – I’m proud to say – from many of the countries represented today here in this room.

We encourage you to remain vigilant about the Maduro regime’s corrupt activities and human rights violations, and to use the tools available to you here in Geneva to hold Maduro accountable.

Today, I would like to ask you to consider additional ways we can together defend and empower interim President Guaidó and the National Assembly.

The United States encourages partner nations to implement serious travel and financial sanctions against Maduro and his allies.  We also ask you to call on Russia, Cuba, and China to cease providing support to Maduro.

The United States has imposed financial and visa sanctions on members of the regime and we will continue to promote accountability for Maduro and his associates in light of their continued corruption and human rights violations and abuses. We have sanctioned more than 200 entities and individuals since 2017.

However, we are also taking measures to ensure that this action has safeguards to permit the Venezuelan people’s access to humanitarian goods, including food, agricultural products, medicines, and medical devices.

The goal of our sanctions and of greater international pressure is to force the regime to negotiate seriously and open a path out of the crisis through a transitional government that will organize free and fair presidential elections.

In the end, a swift negotiated transition to democracy is the most effective and sustainable route to peace and prosperity in Venezuela.  Negotiations could open the path out of the crisis through a transitional government that can oversee an election that can truly determine the will of the people.

The current situation cannot become the new normal.  We cannot accept adding Venezuela to the list of protracted crises that are managed, not resolved.

We here in Geneva – the home of humanitarian principles and the hub for humanitarian response – know the devastating toll that protracted crises can take on communities, on their ability over time to meet their most basic needs and support their families.

We must make meaningful progress toward a real solution now.  The international community has a responsibility to insist on change.  Insist on giving the Venezuelan people hope that this is not the new normal.

We believe Venezuela can have a bright future – it is blessed with abundant resources, both natural and human.  It was once a leader in Latin America and can be again.

Our panelists here today are clear evidence of the potential Venezuela holds.

Venezuela: Threats to Free and Fair Elections in 2020