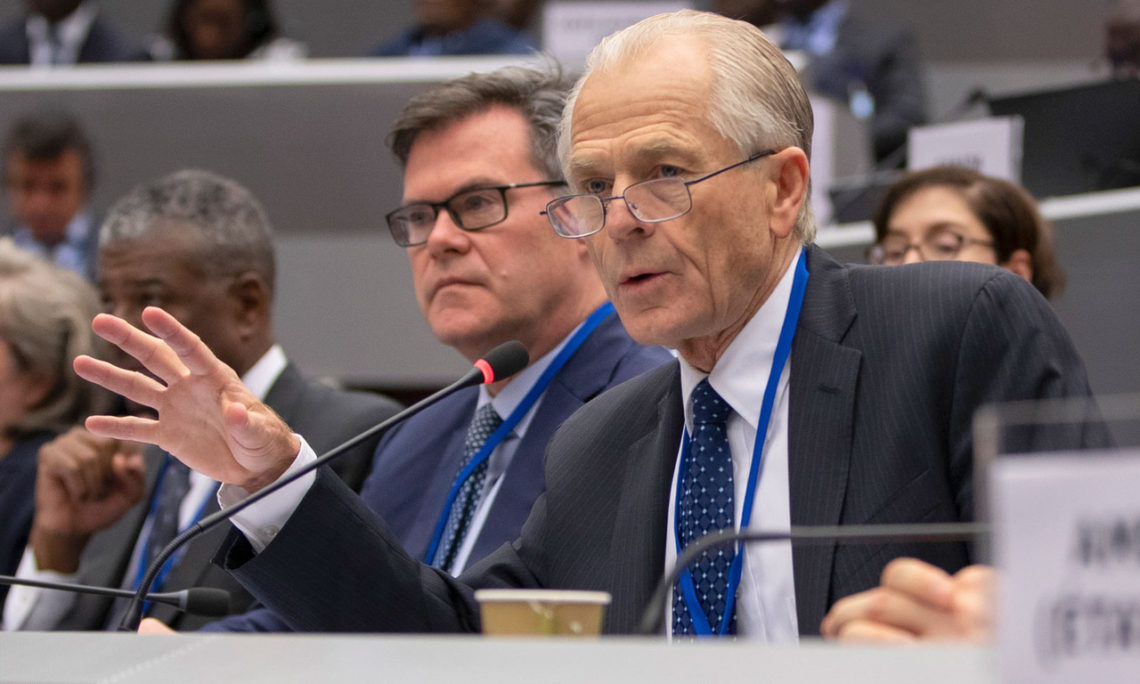 Remarks of Peter Navarro, Assistant to the President and Director of the Office of Trade and Manufacturing Policy, before the Universal Postal Union Third Extraordinary Congress

We are here today because of the leadership of two individuals: My boss President Donald J. Trump and Director General, Ambassador Bishar Hussein.

I have no doubt that President Trump will go down as one of the greatest presidents in American history, and one of the many reasons is that he is a common sense president.  When he found out the United States is being forced to heavily subsidize the import of small parcels in a way that costs our Postal Service hundreds of millions of dollars a year and costs our economy tens of thousands of jobs, he called me into the Oval Office and simply said “fix it.”

So almost a year ago, the United States filed its intention to leave the Universal Postal Union and I have spent the better part of the last eleven months working with a top-level team preparing for a possible seamless exit.

The only reason we are here today is because of the leadership of Ambassador Hussein. Over the past year, through countless meetings — including a visit to the White House — we have relentlessly sought to fix a terminal dues system that everyone in this room knows is broken.

Our success to date is illustrated by the very fact that we are gathered here together at what is only the third Extraordinary Congress in the UPU’s long history.

The fact we are here tells me that a majority of the countries assembled do indeed want to keep the United States in the UPU.  And for that, I thank each and every country that supported the calling of this Congress.

What we must do now is focus like a laser beam on the mission before us; and there are only two acceptable outcomes.

America’s strong preference is for the measure known as Option B. With this option, all members of the UPU would be allowed to immediately self-declare rates. While this option might cause some very short-term disruptions, it is the clearest, cleanest, fairest and quickest path to a reform that is long overdue. We strongly urge its passage today.

The second acceptable path is the multispeed option. It would allow the United States to immediately self-declare rates while other countries would achieve that goal over a five-year period.

The most important thing that I can tell you about this option is that it already represents a very significant compromise of the United States.

I must underscore this point because in my short time here in Geneva, I have already had enough conversations to know that are at least a few among you that appear to think that our position can somehow be weakened.  I can only say to you in all candor that this represents a severe miscalculation and a very poor reading of our intentions.

My final observation as we move to the urgent business at hand is this: While most of you assembled here today focus narrowly on postal issues, I am actively involved in the Trump administration with many of your countries in a much broader economic and strategic context.

For example, I have participated in trade negotiations with countries like Australia, Canada, Mexico, South Korea, Japan, and Great Britain.

I have assisted in strategic initiatives to promote the defense of allies and friends ranging from Bahrain, the Emirates, and Saudi Arabia to Bosnia, Morocco, and Slovakia.

And there are a host of issues now before us with the European Union ranging from the removal of trade barriers and reform of the World Trade Organization just down the street from us to the fair share financing of the NATO alliance.

From this broader perspective, I am personally asking you to support the United States position. I make this ask because in times like these, where no reasonable person could support the terminal dues system, this is what friends and allies do for each other.

In closing, let me offer this quotation from another contemporary world leader:  “Remember the original intentions. Focus on the mission.”

The original intention of the Universal Postal Union was to create a mutually beneficial system that would distribute international mail around the world in a fair and equitable way. The mission here today is to retool this system for the brave new world of e-commerce. As we say in America: You know what to do.