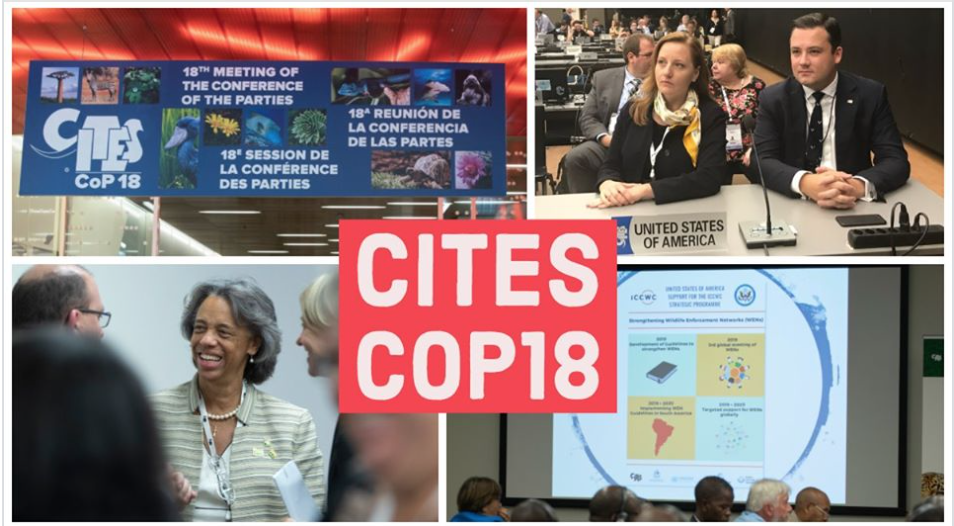 U.S. government leaders, working tirelessly with more than 150 nations, recently forged critical agreements supporting conservation of wildlife and plant species subject to international trade. The 18th meeting of the Conference of the Parties (CoP) of the Convention on International Trade in Endangered Species of Wild Fauna and Flora (CITES) is the world’s most important meeting on wildlife trade, occurring every two to three years. From combating wildlife trafficking to protecting iconic and lesser-known species while supporting their sustainable and legal use, the U.S. delegation achieved agreement on a vast array of pressing international wildlife and plant trade and conservation issues.

“I am very pleased with the outcome of the 18th CoP,” said Wallace. “I believe we moved our conservation goals forward and also reduced regulatory burdens on industry and government with these agreements. It was a privilege to head this impressive delegation and to witness the collaboration between government agencies, non-government organization partners and their international counterparts,” he said.

“It has been uplifting to see the collaboration and cooperation between the Parties as we worked together on some very challenging issues to achieve goals of mutual benefit to all of us,” said Everson on the last day of the Conference. “The work we do together is critical to both economic and wildlife health around the world.”

In other outcomes from the Conference, the United States supported a proposal that will provide a mechanism to regulate and monitor trade in giraffes to ensure trade is not detrimental to the species’ survival. This action will help regulate trade to ensure healthy giraffe populations throughout Africa in the long term.

Of interest to musicians and the music industry, the United States supported a proposal that will reduce the current regulatory burden on the industry regarding the import of certain species of rosewood, which is used in the manufacture of some guitars, other instruments and furniture.

The United States supported strong measures to enforce CITES provisions to fight illegal harvest and international trade in totoaba and protect the critically endangered vaquita. The totoaba, a large marine finfish endemic to the northern part of the Gulf of California in Mexico, has been listed in CITES Appendix I since 1977. The totoaba swim bladder is highly prized for use in traditional medicine in Asia. Vaquita are also an Appendix I species, and both the totoaba and vaquita are classified as endangered under the U.S. Endangered Species Act. The fate of these two species is linked, as vaquita are caught and drown in illegal gill nets set for totoaba. Vaquita are currently estimated to number fewer than 20 individuals.

The United States began its public process to gather and evaluate information related to species involved in international trade and improving implementation of the Convention more than two years ago, culminating in the submission of 11 documents the United States advanced or co-sponsored to be considered by CITES member countries at the meeting.

For more information about the CoP and its outcomes, please visit: https://www.fws.gov/international/cites/cop18/index.html