Statement by Ambassador Wood: The Threats Posed by Russia and China to Security of the Outer Space Environment
By U.S. Mission Geneva
9 MINUTE READ 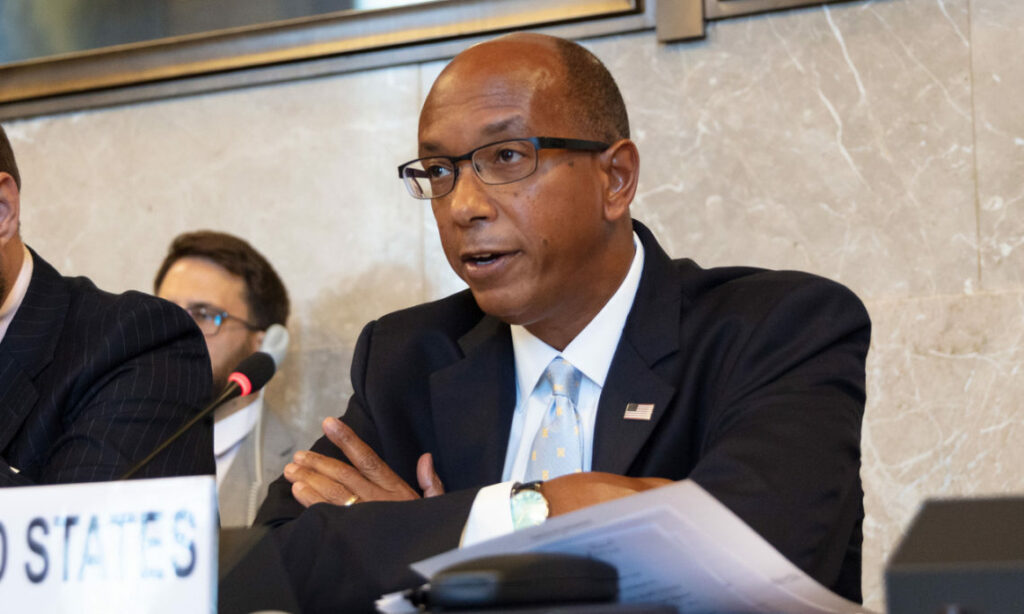 Statement by Ambassador Robert A. Wood

The United States has explained in detail, many times our concerns about definitions and about verification related to objects in outer space and especially related to the draft “Treaty on the Prevention of the Placement of Weapons in Outer Space” that has been submitted to this body by Russia and China. We have previously provided lengthy examinations of the fundamental flaws in the PPWT.

Instead of repeating those arguments at length, I would like to apply the provisions of the draft PPWT to some real-world examples of weapon systems- specifically ground-based weapons – that are designed to damage, destroy or disrupt the on-orbit functioning of spacecraft in order to further the debate in this body. I hope colleagues will find this approach to be illustrative of the challenges we face in considering this issue in the Conference on Disarmament, to provide a sense of how the currently drafted PPWT will not enhance international peace and security, and to discuss some pragmatic steps we could take to actually enhance the security of the outer space environment.

Let me start with the threat to outer space objects. Despite what the proponents of the draft PPWT would have us believe, right now, the greatest threat to satellites is not from weapons in outer space, but rather from ground-based anti-satellite weapons that are designed to “destroy, damage or disrupt the normal functioning of objects in outer space.” The defenders of the draft PPWT would have us believe that the provisions of Article II of the draft text would in fact prohibit these types of ground-based threats. They point to the language in Article II that would obligate parties, “Not to resort to the threat or use of force against outer space objects of States Parties to the Treaty.”

But what everyone in this room should understand is that, despite these claims, nothing in the draft PPWT, including in Article II, prohibits the development, testing, production, storage or deployment of these ground-based anti-satellite weapons. More importantly, despite expressing grave concerns over the threat to objects in space, these are precisely the types of weapons that Russia and China are developing and deploying today.

First, let us start with Russia and its development of a system that is designed to disrupt or damage outer space objects. Last year, Russian President Putin announced the deployment of a ground-based laser weapon called the Peresvet Combat Laser Complex. Russia’s Ministry of Defense has publicly stated that this system is designed to “fight satellites.” Our Russian colleagues have not explained what they mean by “fight satellites,” but the United States believes that this means the Peresvetlaser is designed to either disrupt or damage the normal functioning of another nation’s satellites. Again, the proponents of the draft PPWT claim that the paragraph on the threat or use of force would prohibit the development of any weapon that would be used against outer space objects, including ground-based lasers that are designed to damage a satellite. Yet, here we have the President of Russia actively proclaiming that his country has just such a capability, with no explanation of how Russia’s development of these systems, which threaten outer space objects, is consistent with its public-facing push for space arms control.

Second, let me address a system that is designed to “destroy” outer space objects per the draft PPWT definition. In 2007, China launched a ground-based missile that intentionally destroyed a Chinese weather satellite and created 3,000 pieces of debris in orbit because the Chinese missile was designed to strike the satellite using kinetic force. Most of this debris remains in orbit today, posing an indiscriminate threat to all spacecraft in Low Earth Orbit. Now, our Chinese colleagues have been one of the main proponents of the concept that the language in the draft PPWT on the “threat or use of force” would prohibit the development and deployment of ground-launched systems. Yet the United States judges that China has moved forward with the deployment of the missile system they tested in 2007. Like Russia, China has never tried to reconcile its development of this system with its outward-facing push for space arms control. The very fact that China is deploying such a weapon suggests that China is willing to use it during a conflict. And the implications of the use of such a debris-generating weapon for the security and long-term sustainability of the outer space environment are tremendous. Just as important is the fact that Russia is developing a similar ground-based ASAT missile. Such ground-based anti-satellite weapons are a significant threat to the outer space environment. If they were truly serious about wanting to prevent conflict from extending into space, then Russia and China would abandon their pursuit of such systems.

It is clear from these examples that Russia and China believe it is currently acceptable to attack satellites in orbit from the ground, whether through directed energy or missile strikes. At the same time, they hypocritically profess their concern about attacks on satellites and serve as the main proponents of the draft PPWT.

In addition, I want to remind my colleagues of a speech the United States gave to this body, exactly one year ago today about the on-orbit activities of a Russian Ministry of Defense satellite. This satellite exhibited abnormal behavior and raised questions for the United States about Russia’s intent. The behavior was so inconsistent with the satellites’ stated purpose that itcould cause observers to question Russia’s political commitment not to be the first to place weapons in outer space, which it would also be prohibited from doing under the draft PPWT.

These examples demonstrate that there is not an arms control solution to this issue at this time and that the fundamentally-flawed PPWT has not been, is not, and never will be the solution to the many threats facing the space environment. Instead, these examples serve to remind us that significant differences remain regarding important, fundamental issues such as definitions of what is a weapon and how this draft treaty applies to ground-based weapons. Moreover, we must conclude that the countries professing to support efforts to prevent an arms race in outer space have hypocritically and cynically decided to proceed with the development of ground-based anti-satellite weapons anyway.

For its part, consistent with our efforts to strengthen stability in outer space, the United States will continue to pursue bilateral and multilateral TCBMs to encourage responsible actions in, and the peaceful use of, outer space including through the development and advancement of norms of behavior in outer space and best practices for space operations.

In this regard, I want to applaud the remarks of our UK colleague and welcome the UK’s submission of the report on its 2019 Wilton Park conference on space security. This report provides an important food for thought paper for this body’s consideration of effective, voluntary, pragmatic transparency and confidence building measures and related guidelines defining responsible behavior in outer space.

The remarks by our UK colleague highlight an important point that spaceflight safety is a global challenge and it is in everyone’s best interest to continue to encourage safe and responsible behavior in space while emphasizing the need for international transparency. In an effort to increase the sharing of data on satellite positions and to reduce the risk of collisions, the United States is now implementing a comprehensive policy for space traffic management (STM).

I would also underscore the point our UK colleague made regarding the importance of development guidelines for on-orbit servicing. The United States has already assisted in establishing an industry-led effort called the Consortium for Execution of Rendezvous and Servicing Operations (CONFERS), which in February 2019 released a report on Recommended Design and Operational Practices. Voluntary efforts such as CONFERS offer technically-based and scientifically-sound ideas for States and space operators. These efforts are preferable alternatives to vague and unverifiable agreements that may have unforeseen negative impacts on novel or beneficial economic uses of space.

In this regard, we believe the Conference on Disarmament as well as the UN Disarmament Commission and COPUOS have roles to play in the process of developing these transparency and confidence building measures and best practices, taking into account the respective mandates of each body and with appropriate coordination to avoid unnecessary duplication of efforts within the UN system.