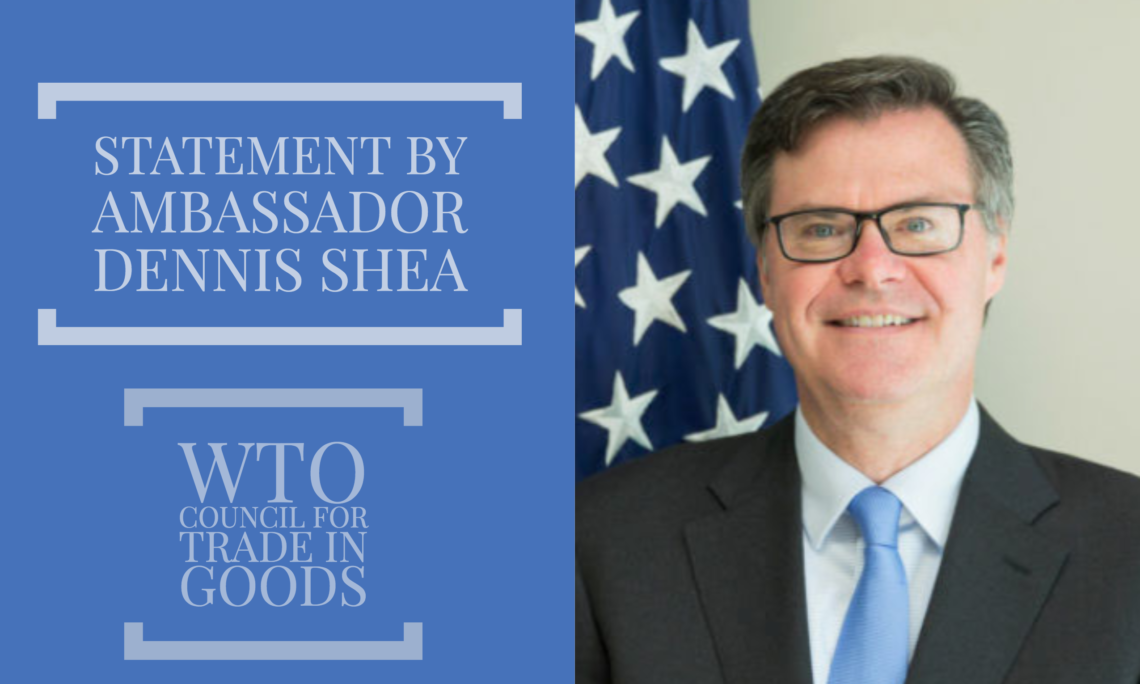 at the World Trade Organization
Council for Trade in Goods

I want to thank my colleague from Chad for his kind words noting yesterday’s World Cup victory by the U.S. women’s national soccer team.  I also want to congratulate the Netherlands for a hard-fought match and great World Cup series.

For more than 4 years, over 40 Members have taken the floor in the SPS and TBT Committees to ask the European Union to reconsider unsound policies–the implementation of which would have a profound and adverse impact on global agricultural production and trade, particularly in developing countries.

In addition, nearly a quarter of the WTO Members taking the floor at the EU’s Trade Policy Review on July 5, 2017, raised these policies as an area of concern.

Chair, given the many concerns raised in the SPS and TBT Committees, as well as in the TPRB, by an unprecedented number of Members over the past several years, we are extremely troubled and disappointed that the EU:

ONE:  Adopted criteria for banning the use of certain substances in agricultural production that are far more stringent than those initially notified to the WTO, and which will likely lead to the banning of a greater number of substances than initially disclosed;

TWO:  Removed and then failed to reintroduce the risk-based amendment to its derogation procedures, breaking the repeated assurances made to WTO Members that critical substances used by agricultural producers around the world would be evaluated on the basis of risk; and

THREE: On November 10, 2018, began implementing its criteria to identify and subsequently ban certain substances, thus finalizing a regulation that codifies a hazard-based approach to pesticide regulation. Under this approach, it remains uncertain how the EU intends to ensure that its actions are consistent with a central tenet of the SPS Agreement: that measures be based on an assessment of risk.

Chair, the concerns by a record number of Members in each of the SPS and TBT Committees, as well as concerns expressed in the TPRB, over the past 4 years have gone entirely unheeded by the European Union.

Implementation of the EU’s pesticide policies, as codified in EU Regulations 1107/2009, 396/2005, and 2018/605, began in November 2018 and is unnecessarily disrupting agricultural production and trade in cereals, tree nuts, bananas, cranberries, grapes, sweet potatoes, mangos, and other agricultural products.

As the EU continues to move forward with additional pesticide bans, we expect potentially severe impacts on agricultural production and trade.  A study published in October 2017 estimated that the lowering of pesticide residue tolerances (maximum residue levels or MRLs) due to the EU’s hazard-based criteria has the potential to adversely affect agricultural trade flows valued at approximately $86 billion annually worldwide, with disproportionate impact to growers in Central and South America and Sub-Saharan Africa.

We must stress that the United States is committed to providing high levels of public health protection based on sound science and internationally accepted risk analysis principles, and to supporting the efforts of other Members to do the same – including through collaboration in Codex to set international standards on pesticide MRLs that protect consumers and lay the basis for fair trade.

In the TBT and SPS Committees, we have repeatedly asked the EU why it continues to implement trade-restrictive measures when there is inconclusive or no scientific  evidence of actual risk to human health—or worse yet, to implement measures that run contrary to the scientific evidence. Furthermore, we have asked the EU to explain why exemptions, grace periods and transitional arrangements granted to domestic producers have not been extended to foreign producers. Our questions remain unanswered.

Continued implementation of the EU’s hazard based approach will result in a continued ban of safe tools and technologies essential to feed a growing world population; and thus, carries the potential to undermine food security and sustainable development.

We bring this to the attention of the Council on Trade in Goods to defend the incomes and the livelihoods of farmers around the world.   We welcome the views of other Members on this critically important concern.