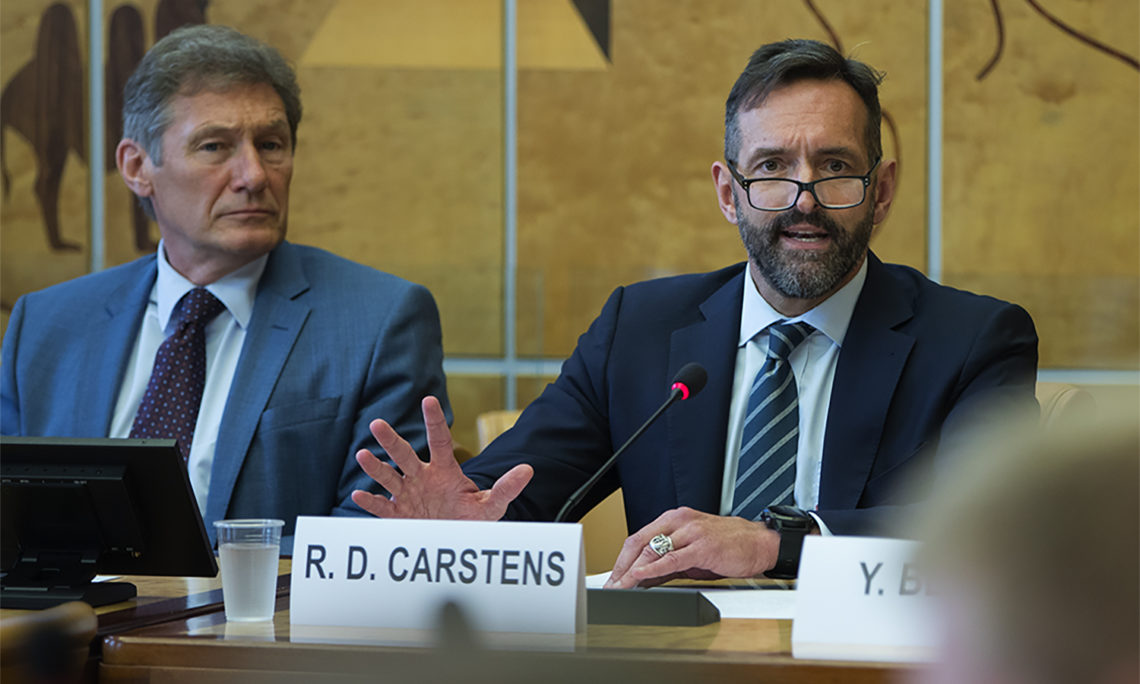 Ambassador Stevens, thank you for the kind introduction. Ladies and gentlemen—good afternoon. And a special thanks to each of our panelists.  It’s an honor to join you here today.  Our work wouldn’t be possible if it wasn’t for each of you.  Your heroic efforts to ensure those who remain trapped in regime prisons are not forgotten inspire all of us.

As you know too well, the death toll in Syria continues to climb. Estimates exceed half a million Syrian lives lost because of the conflict.  More than 5.6 million Syrians are refugees – two-thirds of whom are women and children.  Another 6.2 million are internally displaced, many of whom have been displaced multiple times since 2011.  Cities have been destroyed, families separated, and lives shattered. Hundreds of thousands have been detained or disappeared.  The people of Syria have suffered enormously.

And, as we have seen time and time again in conflict zones, Syrian women – increasingly breadwinners and heads of household, caretakers of young and old, and the psychic heart of their families and communities – have often suffered the most.

The civil war in Syria did not begin with violence.  It started when ordinary people made peaceful calls for freedom, human rights, and reform.  In response, we have witnessed the regime and its backers target civilians with Russian airstrikes and Iranian-supported ground assaults.

We have seen them cripple civilian infrastructure. Local markets, schools, and health care facilities destroyed.  Detaining men, women, children, medical and humanitarian staff, journalists, and others.  Many have been subjected to torture and sexual and gender-based violence, inhumane conditions, denial of fair trials, and death.

Families of the disappeared and detained are often left without any information on the fate of their loved ones.  Women and children are increasingly forced to make ends meet as they wait, hoping their husbands and fathers will return.

And the regime continues to commit these heinous acts.  The Syrian Network for Human Rights (SNHR) reports at least 1,478 cases of arbitrary arrest since the start of 2019 alone.  This madness must end.  That’s why we’re here.  Because we know there will never be lasting peace in Syria without tangible progress towards the release of arbitrarily detained Syrian civilians – particularly women, children, and the elderly.  Studies show that the real or perceived abuses of women in regime prisons have contributed to the radicalization and recruitment of terrorist fighters for ISIS and other groups.  The regime must also adhere to its obligations pertaining to humane treatment of all prisoners, including by allowing access by independent monitors.  And it must provide families greater access to information on the fate of their detained loved ones.

Efforts to release detainees have stalled under the auspices of the so-called Astana Guarantors – Russia, Turkey, and Iran. We have only seen a few token prisoner exchanges – and those were mostly combatants.  We all know the vast majority of Syrian detainees are civilians whose only crime was to call for reform and change.

That’s why we continue to condemn abuses in prisons and call for access to detainees by international monitoring bodies in UN resolutions. We will do so again during UNGA Third Committee in the fall – with the intent to increase the focus on detainees, as we are doing in this panel.

But words are not enough.  That is why the United States and other likeminded countries strongly support the work of the UN Special Envoy, Geir Pedersen, who has stated that addressing the plight of detainees is one of his main priorities. We must ensure the need for detainee releases and improved access to prisons is included in political discussions aiming to resolve the conflict.

It’s also the reason we continue to strongly support the documentation and investigation of abuses in detention centers and across the country by the International, Impartial and Independent Mechanism on Syria (IIIM), as well as Syrian organizations like the Syria Justice and Accountability Centre.  We also recognize the importance of the work of the UN Independent International Commission of Inquiry (COI) on Syria, which has reported thousands of credible cases of government authorities engaging in torture to punish perceived opponents. We look forward to their briefing next week.  These organizations’ efforts lay the foundation for current and future justice processes, including criminal prosecutions.

And we work to mitigate the suffering of those who survived Assad’s torture cells and their families.  These Syrians deserve support from the international community so they have the opportunity to thrive, but barriers often impede access to services, particularly for women.

According to the COI, sexual violence against women and girls at checkpoints is routine, limiting their freedom of movement.  Other barriers to services include the fear of stigmatization and ostracization, as well as the distance to service delivery points and family restrictions.  In response to calls to increase access to services, my team launched the Syrian Survivors of Torture Initiative (SOTI).  Through Syrian organizations, SOTI works to address the physical, psychosocial and legal needs of Syrian survivors of torture, former political prisoners and their families.  But the scale of need is overwhelming.  We would welcome greater collaboration through SOTI and other efforts to address the needs of survivors.

With that, I’d like to conclude so we may hear from our panelists, who represent the millions of Syrians impacted by the regime’s horrific actions.  I cannot emphasize enough how thankful I am for your courage.

We must continue to shed light on these abuses, support the former detainees and survivors of torture, and work to hold those responsible accountable.  I look forward to hearing your recommendations and to working with each of you.