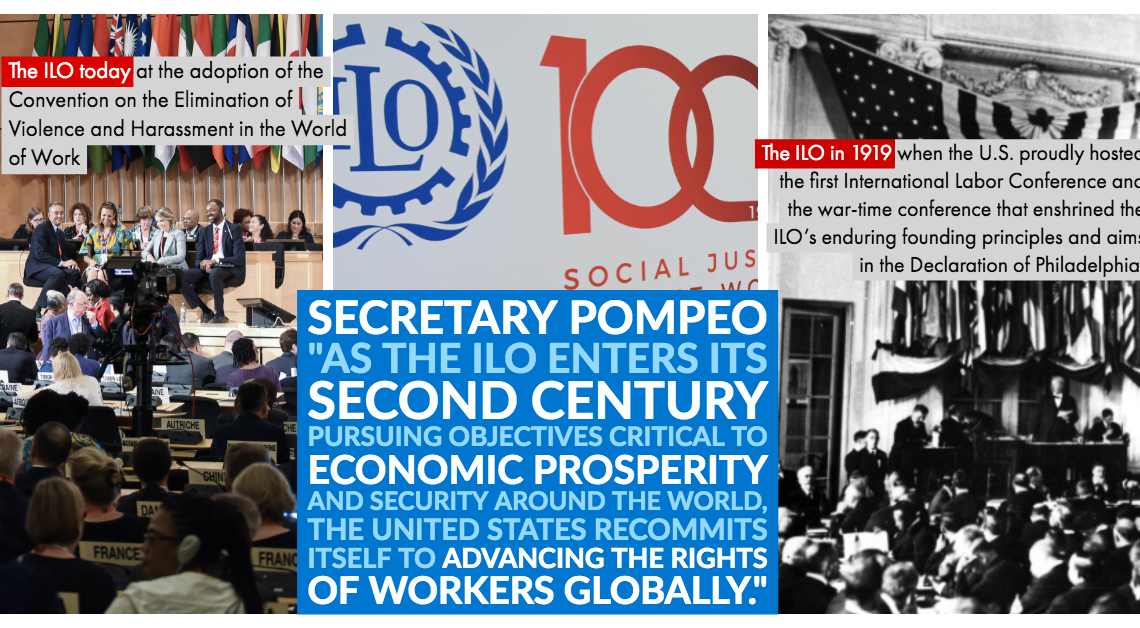 On the Centenary of the Founding of the International Labor Organization

The United States today celebrates the 100th anniversary of the founding of the International Labor Organization (ILO). The dignitaries that convened in Paris in 1919 to end the Great War knew that any lasting peace needed to be rooted in the protection of individual rights, including the rights of workers and employers to associate freely and bargain collectively. The United States proudly hosted the first International Labor Conference in 1919 and the war-time conference that enshrined the ILO’s enduring founding principles and aims in the Declaration of Philadelphia. As strong supporters of the ILO and its mission, we reflect on the important role played by Americans to create and sustain this organization, including David Morse, who served as ILO Director-General for 22 years, and under whose leadership the ILO won the Nobel Peace Prize.

Though conditions for workers in many places have improved vastly, by no means is the work of the ILO and the international community finished.

We note the dire conditions in Xinjiang, China, where over a million Uighurs, ethnic Kazakhs, Kyrgyz, and other Muslims have been detained in concentration camps since April 2017, with many subjected to forced labor, among other forms of inhumane treatment. Students, independent labor activists, and others advocating for fair and safe working conditions are also increasingly under threat in China, including the approximately 50 workers and students the government detained for supporting workers attempting to organize a trade union.

In Iran, workers face the death penalty for merely demanding to be paid for their labor, while the Iranian Revolutionary Guards Corps enjoys massive government subsidies and plunders the Iranian people’s resources with impunity.

We also recognize the suffering of the Venezuelan workers and employers who face severe limitations to their freedom of association and right to organize, and who have been systematically impoverished at the hands of the former Maduro regime.

The ILO has done important work in Zimbabwe, where security forces have committed acts of violence and harassment against trade union leaders. We remain concerned that government interference with trade union activity remains common in Zimbabwe.

As the ILO enters its second century pursuing objectives critical to economic prosperity and security around the world, the United States recommits itself to advancing the rights of workers globally.