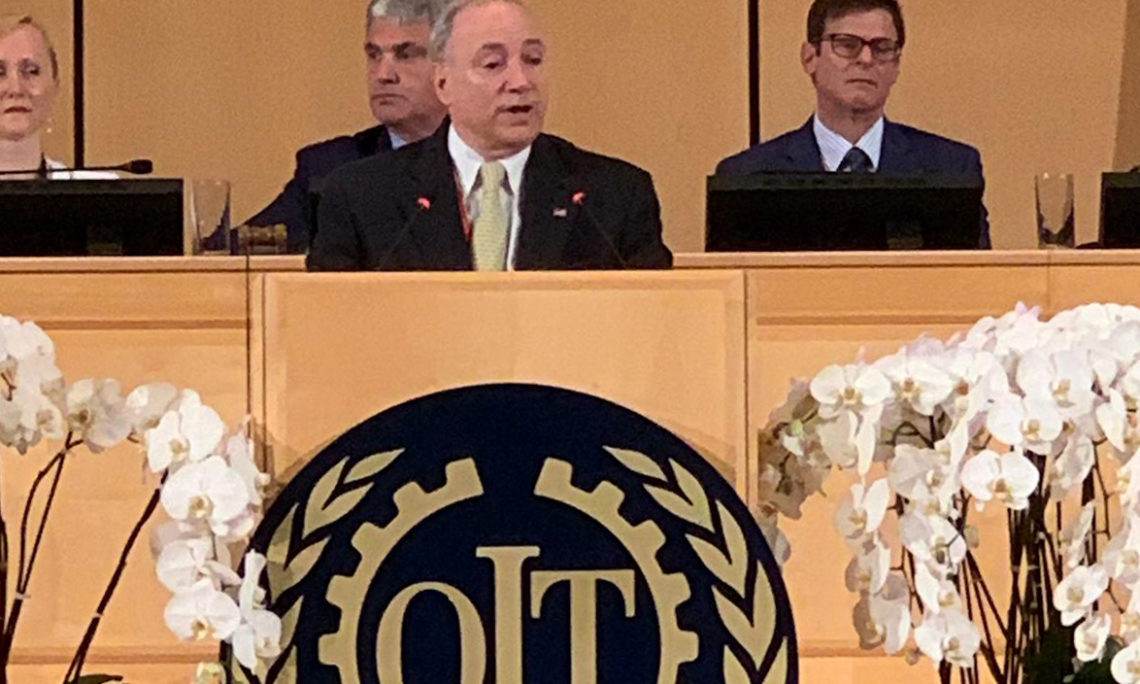 It is a pleasure to be here on the 100th anniversary of the International Labor Organization. On behalf of U.S. Secretary of Labor Alexander Acosta, I would like to thank Director-General Ryder for his stewardship of the ILO and for leading this conference.

I’d also like to thank the city of Geneva for its wonderful hospitality. It’s a beautiful city, especially in the summer, and I’m sure I’d say that even if it didn’t exemplify the prosperity and benefits that come from embracing personal liberty and economic freedom.

And I think that’s a good place to begin my remarks, because without a thriving economy, there is no work, and without work, there are no workers. It is no coincidence that the countries with the greatest economic freedom and opportunity also have the safest working conditions, the healthiest workers, and the highest wages.

Over the century since its creation, the ILO has helped many nations develop sound and consistent labor laws and standards that now serve as the basis for many legal frameworks and trade agreements around the world. Perhaps most significantly, the ILO has also been key to some of the most important multilateral work in the world:

In this area, the ILO has and will always have the United States as an active partner and supporter.

But none of this work would be possible without the free markets and prosperity that enable it. Indeed, without liberty there is no labor movement. One of the best things we can do to support workers across the world is to continue to advocate for greater economic freedom, because the best thing for workers is a strong economy that provides family-sustaining jobs.

Now, allow me to abandon my modesty for a moment, but I think this is an important point. In the United States, under the leadership of President Trump, we have seen strong economic growth that has driven down unemployment to record lows. We have more than a million job openings than people looking for work. We’re dancing on the cusp of full employment. à

Wages are increasing.  It’s never been a better time to be a worker in America!

The American workplace has never been safer, worker injuries and fatalities on a per capita basis have never been lower. And all of this against the backdrop of a slowing global economy!

These labor accomplishments were achieved by enacting President Trump’s agenda of economic freedom that reduced burdensome regulations and taxes, and recognized that everyone, companies and workers, wins when property rights are respected, individual liberty is respected, and the government plays a modest and limited role in the economy.

However, it is important to remember that free and fair markets, after all, need rules, ideally simple ones. And the United States is absolutely committed to ensuring the rules are followed. In the area of international trade, this is of paramount importance, and the ILO’s work in this space is critical, because labor abuses not only harm workers, they threaten nations, companies, and workers who do play by the rules. That is unacceptable.

Our goal is a level playing field across countries. As President Trump has forcefully stated that “The United States and our trading partners benefit greatly from free, fair, balanced, and reciprocal trade,” and this administration has worked vigorously to make that goal a reality.

The agreement includes a labor chapter that brings labor obligations – obligations based on ILO principles — into the core of the agreement and makes them fully enforceable.

These are the strongest labor provisions of any trade agreement and mark an important step forward in our effort to level the playing field.

The labor provisions and obligations in the USMCA are drawn directly from the ILO’s body of principles and standards. The text of the agreement is unambiguous. The agreement calls on the parties to “affirm their obligations as members of the ILO,” and stipulates that all parties maintain in law, regulation, and practice, the four core components of the Declaration — freedom of association and collective bargaining, nondiscrimination, forced labor and child labor.

The United States is proud that Director-General Ryder said the USMCA has “the most comprehensive labor chapter that [he has] seen” in any trade agreement. Once the USMCA is ratified, President Trump will be responsible for, on a global scale, the most pro-labor treaty we’ve seen this century.

We will continue to look to the ILO to help provide the tools and guidance that enable effective enforcement.  Doing so will not only help advance free and fair trade, but will help us all take a giant step toward achieving the goals for which this organization was created.

On many anniversaries and birthdays, we tend to look back. But to the credit of the Director-General, on this occasion I believe we are all looking forward. Together with our friends and allies, we are focusing on the future, promoting economic freedom, and building durable partnerships and agreements, and the ILO has a crucial role to play in facilitating and shaping that future.