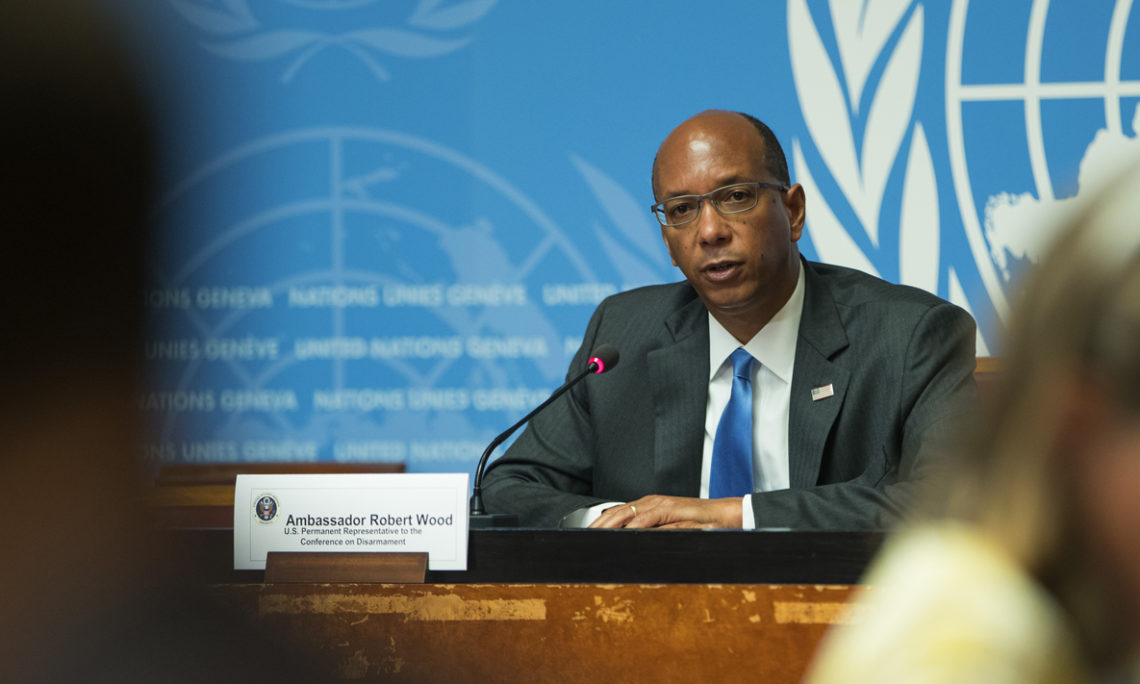 Ambassador Wood spoke with the media May 29 after the U.S. announced a boycott of the CD.

The United States walked out of the CD Plenary to protest the former Maduro regime’s presidency and therefore did not deliver the following prepared statement.

It is with great frustration that I must request the floor today to address the Conference on Disarmament.

As many of you may recall, in 2018, I took the floor to announce that “based on Syria’s repeated attempts to use its presidency of the Conference on Disarmament to normalize the regime and its unacceptable and dangerous behavior, the United States will not participate in the Syrian-led plenary.”  It simply is unfathomable that the body which negotiated the Chemical Weapons Convention would tolerate a presidency by a regime that uses chemical weapons against its own people.

And yet here we are again, less than one year later, facing another profound CD leadership crisis, as we are confronted with yet another illegitimate presidency presiding over this body.  Because the United States continues to see value in the Conference on Disarmament and remains committed to its potential, we are again compelled to take a principled stand in support of this august body’s noble ideals.

Those who sit in Venezuela’s seat today represent the illegitimate regime of Nicolas Maduro, and thus are not speaking on behalf of the Venezuelan people.  To participate in the CD under their presidency would lend credibility and legitimacy to this illegitimate, morally bankrupt, economically incompetent, profoundly corrupt, and inhumane regime.  We should not normalize and bestow legitimacy upon the Maduro regime.  Participating in the CD under the presidency of Maduro regime representatives would be an abrogation of our duty as a responsible CD member state.

Let me be clear about what is at stake: the Maduro regime stole an election from the Venezuelan people, bankrupted the country’s economy, created the second largest refugee and migration crisis in the world, and denied Venezuelans the humanitarian supplies they so desperately need.

The dire humanitarian crisis in Venezuela worsens by the day; the devastation is overwhelming and the needs are vast.  Nearly 3.7 million Venezuelans have left their country due to political chaos, threats of violence, and a lack of basic amenities, including electricity and water.

The Maduro regime has consistently used repressive tactics against democratic actors in Venezuela, including trying to silence Venezuela’s National Assembly – the only democratically elected institution remaining in the country.  Every day that Maduro clings to power is a day that individuals who have been arbitrarily or unlawfully detained stay in jail, detainees are abused and subject to cruel and degrading treatment that could amount to torture, and Venezuelans go without medicines and food.

The United States and other countries that value freedom, and share a commitment to the goals and mandate of the CD, have a moral obligation to support the Venezuelan people as they strive to reclaim their democracy, uphold their constitution, and maintain their sovereignty.  We must support Interim President Juan Guaidó and the National Assembly, and support his representative in Switzerland as she seeks to assume her rightful place within the Conference on Disarmament.

The walkout by the Lima Group, the United States, and other responsible nations during High Level Week in February this year was in direct response to the Maduro regime’s representation in the CD, and sent a strong message to the Venezuelan people, and to the world, regarding our joint commitment to liberty and the rule of law.

Building on this momentum, the Lima Group’s decision to also boycott the entirety of Venezuela’s May 27-June 21 presidency, as stated during the final plenary session of the U.S. presidency on May 22, further advances this vital message of solidarity with the Venezuelan people.  Moreover, with over 50 nations around the globe recognizing Juan Guaidó as Venezuela’s Interim President, multiple CD Missions have downgraded their representation in this body.  We simply cannot sit idly by while Maduro representatives usurp role of the elected representatives of Venezuela in this body.

Looking forward, it is difficult not to wonder what this leadership crisis means for the future of the Conference on Disarmament.  As the only standing multilateral forum for negotiating arms control and disarmament agreements, the Conference on Disarmament, along with its predecessors, has achieved landmark agreements over the past 40 years, and has great potential to build upon its impressive legacy.

Yet this body continues to squander its potential, as member states perpetually flounder in deadlock, locked in an interminable loop of our own making.  We continue to cling to our set ways, repeating the same failed exercises year after year while expecting different outcomes.  If we were serious about breaking through this impasse, we would need to be open to exploring new ideas and to tweaking existing working methods, rather than lashing out with stale rules of procedure arguments and criticisms of politicization meant to stymie progress.

That is why the U.S. was a strong supporter of the subsidiary body proposal put forward by the UK presidency earlier this year, which included the appointment of a Special Coordinator to informally review CD membership expansion and working methods.  That some CD member states rejected such an informal, nonbinding, exploratory process is both telling and disappointing.

Moving forward, we must ask ourselves, are we to become an effective organization that stands for something, or one that reverts to the lowest common denominator, kept in limbo through inertia?

The United States believes the Conference on Disarmament is better than that.  We have a responsibility to honor the CD’s legacy, the ability to shape its future, and the imperative to make progress so that the CD can once again perform its role as the only standing multilateral forum for negotiating arms control and disarmament agreements to make the world a safer place.  Its fate is in our hands.

But as we consider exploring innovative ways to unlock the CD’s deadlock while work is done to create an environment conducive to nuclear disarmament, we must also be willing to defend the CD’s integrity.

The United States unequivocally deplores the unconscionable acts carried out under the Maduro regime in Venezuela.  History has shown that a regime that oppresses its people and blatantly disregards the rule of law at home has contempt for international obligations and norms.  The CD cannot move forward when held captive under the yoke of illegitimate leadership.

The United States, therefore, in an expression of strong support for Interim President Juan Guaidó and his team, as well as for the Conference on Disarmament and its mandate – what it stands for and seeks to accomplish – will boycott the CD for the remainder of the duration of Venezuela’s presidency.  We look forward to working with members of Interim President Juan Guaidó’s team in the future as we seek to build upon the CD’s impressive legacy, reasserting its relevancy so that it can yet again tackle compelling security challenges.