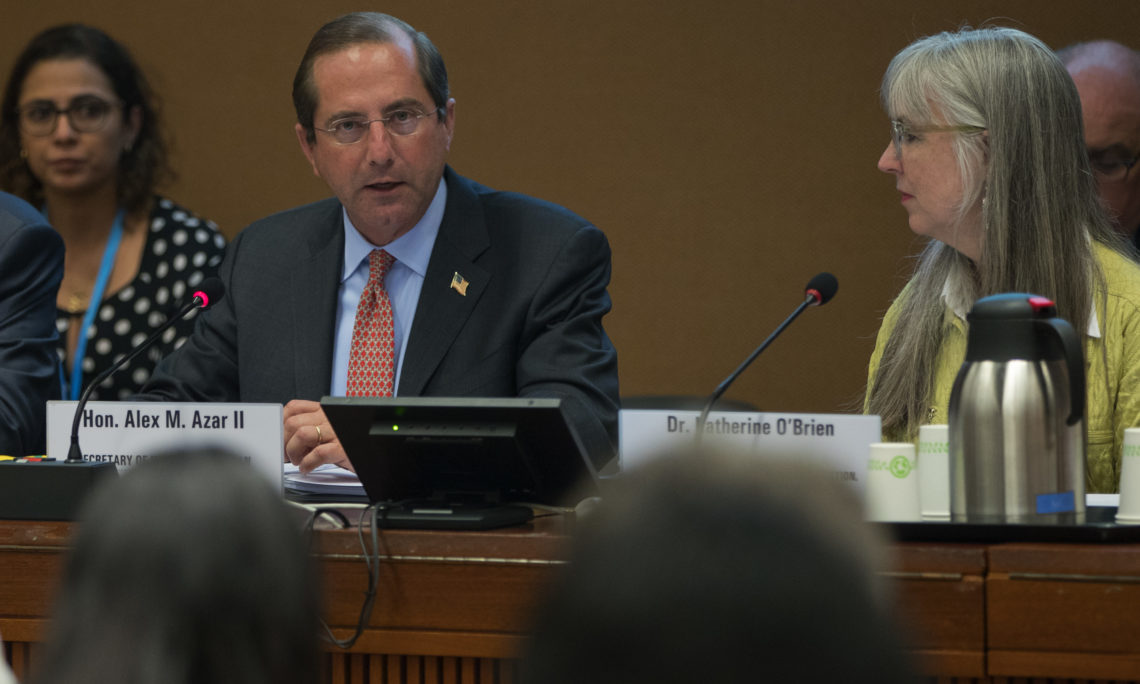 Secretary Azar Remarks on the Importance of Vaccination

Geneva,
May 21, 2019
Secretary Azar delivered opening remarks at a side event at the 72nd World Health Assembly, hosted by the United States, Brazil, and the European Union.

As Prepared for Delivery

Fellow ministers, distinguished leaders, thank you for joining me at this important event, and thank you in particular to the EU and Brazil for co-hosting with the United States.

Unfortunately, there is no better time than the present for us to come together to discuss how to make better use of vaccines.

Vaccines are some of the most thoroughly tested medical products we have. Vaccines are safe, effective, and lifesaving. But around the world, complacency among the public, coupled with misunderstanding and misinformation, is causing vaccination rates to decline, with tragic results.

Misinformation comes from a range of sources. Insurgent groups in the Democratic Republic of Congo spread misinformation about the Ebola vaccine. Terrorists in Pakistan do the same, preventing children from receiving the polio vaccine.

In my country, social media conspiracy groups confuse well-meaning parents so they hesitate to get the recommended vaccinations.

This misinformation has real impacts. Consider the numbers we have on measles: The WHO estimates only 85 percent of eligible children receive the first doses of the measles vaccine, while only 67 percent receive the second.

As of April 15, the WHO reported more than 112,000 confirmed cases of measles across all regions. In the U.S., we have seen more than 700 cases of measles this year, the highest number since the disease was declared eliminated from the U.S in 2000.

But we can fight back, and you will find no government more committed than the United States to combating these challenges and strengthening immunization programs around the world.

It is safe to say the U.S. supports, in some way, the national immunization programs of every low-income country, through a variety of mechanisms, and that work extends to a large number of middle-income countries as well.

The U.S. Centers for Disease Control and Prevention provides technical support from its Atlanta headquarters, our CDC offices overseas, and CDC employees embedded in WHO and UNICEF offices. We provide technical and financial support for lab testing of vaccine-preventable diseases, and CDC serves as a global specialized laboratory for polio and measles. Through the National Institutes of Health, we generously support research on new vaccines for diseases such as Ebola and HIV.

We also provide financial support for vaccine provision through a number of channels, including contributions to the Global Alliance for Vaccines and Immunization or GAVI, which I would like to emphasize, is a highly successful public-private partnership.

We assisted with a diphtheria outbreak among Rohingya refugees in Bangladesh.

We contributed to new research that found a one-fifth dose of yellow fever vaccine works as well as a full dose, which is important in the event of a shortage.

At home, under my direction, the U.S. Department of Health and Human Services has ramped up nation-wide education efforts to increase vaccination rates.

Addressing vaccine-preventable disease has also been one of the top priorities of the U.S. response to the crisis in South America caused by the Maduro regime’s destruction of the Venezuelan healthcare system, which has allowed measles and other diseases to return to a region where they had been eliminated.

All sectors, and all nations, large and small, have something to contribute in turning the tide against vaccine-preventable diseases.

I look forward to hearing from diverse perspectives today, and to working with all of you in the years to come to make real progress against preventable diseases.

Thank you for your attention today, and I look forward to our next speaker, EU Commissioner for Health and Food Safety, Vytenis Andriukaitis.