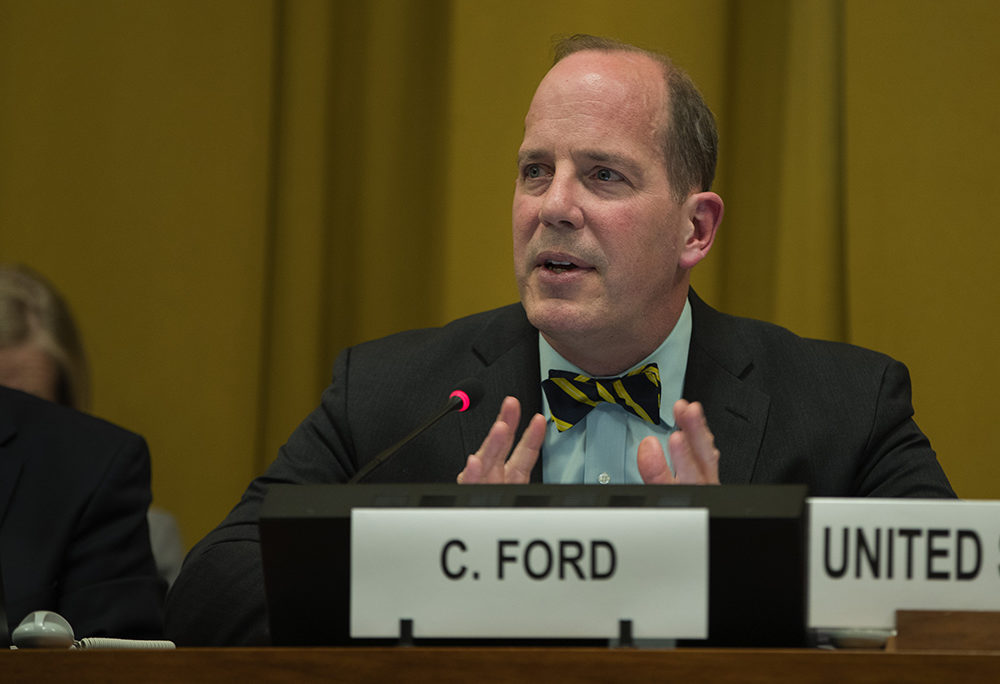 Our Vision for a Constructive, Collaborative Disarmament Discourse
The Hon. Christopher A. Ford
Assistant Secretary of State for International Security and Nonproliferation
Remarks at the Conference on Disarmament
Palais des Nations, Geneva, March 26, 2019

(as prepared for delivery)

Mr. President, Excellencies, ladies, and gentlemen, I am pleased to be able to speak to you today.  As many of you no doubt already know, the United States is in the process of developing implementation plans for a path breaking new initiative aimed at bringing countries together in a constructive dialogue exploring ways in which it might be possible to ameliorate conditions in the global security environment so as to make that environment more conducive to further progress toward — and indeed, ultimately to achieve — nuclear disarmament.

Our initiative is a new one, and represents both a conceptual break from, and an effort to build upon, the remarkable progress that has been made in bringing down our nuclear arsenal since its Cold War Peak— progress that, one should never forget, has resulted in an 88 percent reduction in our arsenal. The basic insight here, of course — and which animates our new initiative — is that these impressive reductions did not bring about the end of Cold War tensions, but rather instead resulted from the easing of those tensions.

To be sure, this is, in many respects, not a new understanding. In fact, it was recognized explicitly in the text of the Treaty on the Non-Proliferation of Nuclear Weapons (NPT) itself more than half a century ago, the Preamble of which calls for easing tension and strengthening trust “in order to facilitate” disarmament.  But this insight about the centrality of security conditions is one that some may have forgotten during earlier post-Cold War years, during which the nuclear superpowers had the luxury of being able to coast forward in implementing sweeping disarmament steps for a long time merely on the strength of an easing of tensions that had already taken place.

With that fairly obvious but important understanding firmly in mind, the challenge we all confront today is how to imagine the disarmament enterprise continuing to move forward in a world in which the prevailing security conditions have been worsening, rather than improving.  In the face of such challenging questions, our new initiative — on “Creating an Environment for Nuclear Disarmament” (CEND) — aims to help the international community find a path forward by setting in motion a “Creating an Environment Working Group” (CEWG) process.  Under its auspices, participating countries would work together first to identify a number of key questions or challenges that would need to be overcome along the road to eventual disarmament, and then to explore possible answers to those questions.

This process will be no magical panacea, of course, for the security challenges of the modern world that would have to be addressed along that path are surely many and daunting.  But we firmly believe that it is important to try to find a path forward, and we are convinced that whatever pathway may exist is one that necessarily runs first and foremost through addressing the security challenges that motivate nuclear weapons acquisition and retention.  We are also convinced that this is a challenge that all states need to address together, as Article VI of the NPT makes clear in requiring all NPT Parties to pursue negotiations in good faith on effective measures for disarmament, rather than addressing itself solely to any particular states or sub-category of states.  Indeed, with global elimination of nuclear weapons being explicitly the ultimate objective, efforts to achieve it must include NPT non-Parties as well.

Many of you probably know most of this already, but I do think it is useful to repeat these points here at the Conference on Disarmament — which in so many ways has unfortunately been stymied in its efforts to develop new disarmament initiatives precisely because persisting regional and global tensions continue to drive certain Members to impede progress out of fear that under prevailing security conditions, such agreements would run counter to their perceived national interests.  Repeating these points here in Geneva is also important because recent events — such as the impending collapse of the Intermediate-range Nuclear Forces (INF) Treaty as a result of Russia’s development and deployment of a growing arsenal of treaty-prohibited missiles that threaten the countries of Western Europe and East Asia alike — highlight the fact that without addressing some highly problematic trends in the global security environment, it will be very hard, or even impossible, to imagine any future for nuclear disarmament at all.

It seems clear now that traditional approaches to disarmament can no longer meet the pressing needs of today’s world, nor can some of the more new-fangled approaches that have arisen out of some countries’ frustration with even more disarmament not having occurred. Traditional approaches, at least of the sort which we were fortunate to be able to employ in earlier post-Cold War years, have largely run out of steam — both because the many weapons made unnecessary by the end of Cold War tensions have now already been dismantled, and because conditions in the global security environment are today worsening rather than improving.

Nor does the newer effort of the Treaty on the Prohibition of Nuclear Weapons (TPNW), however desirous one might be of the end state sought under that Treaty, offer a viable alternative.  In part, this is because its very structure assumes that one can declare nuclear weapons away without having first alleviated the problems of the underlying security environment that help drive nuclear weapons choices.  But this is also because so much of the TPNW’s advocacy discourse revolves around stigmatizing and demonizing the security choices of deterrence-reliant countries — that is, precisely those whose cooperation is essential for genuine disarmament efforts to bear fruit.

Please don’t misunderstand me.  We fully understand the frustrations some have expressed as a result of disarmament still seeming so distant more than seven decades since U.S. officials first proposed the bold disarmament initiative of the Baruch Plan at the United Nations.

Precisely because these issues are so important, however, they deserve to be approached thoughtfully and in a spirit conducive to the kind of dialogue that will be essential if indeed we are to live up to the NPT Preamble’s exhortation to ease tensions and strengthen trust between states in order to facilitate disarmament.  It is in order to set in motion just this kind of dialogue that we have proposed the CEND process, and we very much hope that countries of goodwill will join us in helping make this work.  Recreating a security environment in which nuclear weapons states find it in their mutual interest to advance nuclear disarmament will require political will and concerted efforts from all nations. I firmly believe that there is likely to be no path forward that does not involve sincere and constructive engagement by a broad range of parties.

In response to our announcement of the CEND initiative, therefore, it has been gratifying that quite a few countries from different regions of the globe have already expressed interest in joining this effort.  I am particularly pleased that our Dutch colleagues have geared up to organize an academic colloquium — which will take place just a couple of weeks from now — specifically designed to generate thoughtful insights and ideas to contribute to this endeavor.  With the global disarmament discourse now increasingly coming to recognize and focus upon the challenges of ameliorating problematic international security conditions, I hope that these initial steps will help catalyze further ones in a sort of “virtuous circle,” perhaps to the point that even outside the specific discussions of the CEWG process, a thoughtful and constructive new ecosystem of complementary and mutually-reinforcing initiatives can develop – upon the fruits of which we can all draw in finding better ways to address the security problems that stand in the way of further progress.

Nevertheless, I know that in some quarters our new initiative is still regarded somewhat warily.  I hope that more and more countries will see fit to participate, however, not least because it is surely some of the countries most suspicious of any disarmament initiative proposed by a nuclear weapons state that may have in some regards the most to offer in the kind of constructive dialogue we envision and hope to bring about.

In this respect, I think we can perhaps learn something from the well-regarded International Partnership on Nuclear Disarmament Verification (IPNDV) — a voluntary, working-group-type process now in the second phase of its ongoing effort to explore how it might be possible to verify the dismantlement of nuclear weapons pursuant to some potential future disarmament agreement.  Much of the value of IPNDV has stemmed from its ability to bring together countries that have very different relationships to nuclear weapons in order to explore that verification problem together, to their mutual edification.

IPNDV, for instance, has been helping nuclear weapons possessors better understand the degree to which meaningful verification might actually be possible after all; it has been helping dispel misconceptions among non-possessors about just how difficult verification can be; and it has been helping all involved understand the degree to which such verification can be done without spreading proliferation-sensitive knowledge.  These are important lessons, but such constructive lesson-learning benefits hugely from having a good breadth of participation.  Weapons states working only among themselves might be able to use their unique knowledge to devise very good ways to verify dismantlement, for instance, but non-weapons states must also be able trust the outcome, and IPNDV’s collaborative exploratory process helps allow these questions to be explored together.

What we envision for CEND and its Working Group process is a loosely analogous range of participants, coming together in an initial plenary in order to develop a constructive agenda, and then meeting in a range of working groups to try to address the challenges thus identified. Just as IPNDV has benefited from a diverse range of participants from across the relevant issue spectrum — weapons states, non-weapons states, nuclear alliance states, and non-alliance states alike — so we would like to see each of the CEND groups include a geographically and politically diverse group of participants appropriate for its topic.  All participation is entirely voluntary, of course, but as your own governments evaluate whether and how you might be able to contribute, we would be delighted to see participants from across all the world’s relevant political divisions: weapons states, non-weapons states, developed countries, less-developed countries, alliance states, G-77 states, NPT States Party, NPT non-parties, and so forth. The price of admission, you might say, is no higher than having a sincere commitment to this kind of dialogue.

So that’s a recap of our vision for this process, about which I hope to have more to say in the near future as our thinking matures and more countries opt to become involved.  We encourage wide participation, because this will increase the value of the process as a means through which the international community can begin to explore possible ways to overcome the challenges that lie ahead of us if a path is to be found to achieve the world envisioned in the Preamble and in Article VI of the NPT.

To those of you who have come forward already to be a part of this noble experiment, we thank you.  To those of you considering doing so, we encourage you to make your interest known.  I very much look forward to working with all of you in this great endeavor in the months and years ahead.