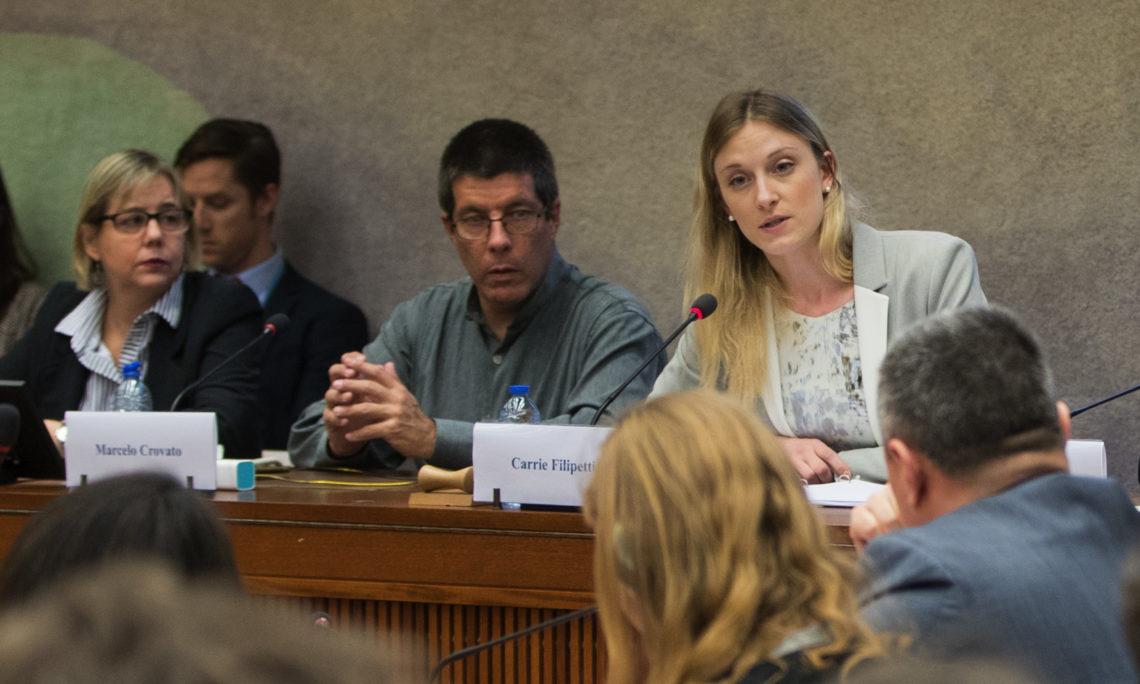 at an event on Human Rights Violations and Abuses in Venezuela

We want to welcome our distinguished guests and the courageous panelists to this event on Venezuela’s human rights crisis. The United States is joined by Albania, Argentina, Colombia, the Czech Republic, Denmark, Georgia, Hungary, Israel, Romania and the United Kingdom in hosting this event because we’re deeply concerned about the human rights violations that are ongoing under the Maduro regime, and we would like to continue to raise awareness of Venezuela’s human rights crisis.

We thank all of our co-sponsors for their valuable support. We have collectively chosen to host this event because at a time when the world is seized with news about Venezuela’s dire economic and humanitarian crisis caused by the failed economic policies of the Maduro regime, we must come to the heart of the problem:

The Maduro regime cannot speak for the people of Venezuela as long as it represses their freedoms of expression, association, and peaceful assembly.

It cannot be the protector of its citizens when it tortures, disappears, and kills them.

Torture and extrajudicial killings by security forces, and abuses at the hands of regime-financed armed gangs called colectivos; undue restrictions on freedom of expression, including for the press; life threatening prison conditions; and violent suppression of peaceful demonstrations are commonplace in Venezuela, where the Maduro regime rules by instilling fear and robbing the liberties of its citizens and anyone who dares oppose it.

The Maduro regime cannot give citizens of Venezuela hope for a better life when it denies basic access to food and medicine to those who would speak out against the regime.

The United States is outraged by the Maduro regime’s violations and abuses of human rights, violent repression of dissent, and undue restrictions on the fundamental freedoms of the Venezuelan people. We are also deeply concerned by the destabilizing effect these violations are having in the region, as thousands of Venezuelans flee the nation’s borders, every single day.

Today, we will hear from legal experts, an elected representative of the Venezuelan National Assembly, and individuals who have personally suffered at the hands of the regime.

On March 13, during his remarks for the rollout of the U.S. Department of State’s annual human rights report, Secretary of State Mike Pompeo said that by issuing these reports, “We deployed the truth – the truth about abuses occurring around the globe.”  He wisely noted that truth is one of the most powerful weapons in our diplomatic arsenal. So today, I come armed with that truth.

Truth: On February 23 and 24, eight people were killed, including four members of the Pomona indigenous group, and dozens more were shot or otherwise injured by regime security forces simply for attempting to seek access to desperately needed humanitarian assistance just over the border in Brazil.

Truth: According to Venezuelan NGO Foro Penal, at least 40 people have been killed in protests since January 1. According to the same NGO, 770 people alone were detained on January 23.  A grand total of 1,255 people have been arbitrarily detained merely since January 21, and many of them have yet to be released. A large number of these individuals are from the most impoverished parts of the country who are already the most vulnerable to the lack of access to food, medicine, and other basic necessities. As of March 12, there are 911 prisoners of conscience in Venezuela, as reported by Foro Penal.

Another truth: On October 8, 2018, opposition council member Fernando Albán died while in regime custody. His body fell from the tenth floor window of a maximum-security prison. In simultaneously released official statements, the regime offered contradictory accounts of his death. NGOs denounced these conflicting stories, calling it murder, and a representative of the Office of the High Commissioner for Human Rights expressed concern, and noted Venezuelan officials had a responsibility to ensure his safety under their custody.

Truth: An NGO study of 89 detention facilities revealed 80% had no medical or laundry services, 60% did not have potable water, and 50% did not have regular trash collection or proper restrooms.

Truth: In 2017, over a 125 people were killed during four months of nationwide protests as the people of Venezuela took to the streets to protect their constitution and fight for their rights. The Public Ministry reported that government security forces were responsible for over 65% of these deaths.

These truths in Venezuela are startling. In addition, media outlets who strive to report them are shuttered, and journalists are abused or jailed.

Just last week, Polish journalist Tomasz Surdel, who many of you may know, as he used to report on Human Rights from Geneva, was reportedly beaten by colectivosin Caracas. He joins a long list of journalists from around the world, including Billy Six, Cody Weddle, Jorge Ramos, and Luis Carlos Diaz, who have been arbitrarily detained by the Maduro regime.

The Maduro regime propagates dangerous rhetoric calling members of the opposition terrorists and denouncing so-called international interventionism despite fueling its own repression with foreign — that is to say Cuban – expertise. It has attempted to blame the opposition and sanctions for the country’s self-inflicted economic collapse caused by the failed policies of the Maduro regime. But, the regime has been unable to fabricate an excuse for widely reported torture and extrajudicial killings at the hands of regime security forces and allied armed gangs.

We as the international community have a moral obligation to act.

To all those in this room, States and members of civil society, and elsewhere, the United States urges you not to remain silent in the face of these abuses. Stand with us, the Venezuelan people, and 53 other nations to recognize interim President Juan Guaidó, and help put Venezuela back on a democratic path to free and fair elections.