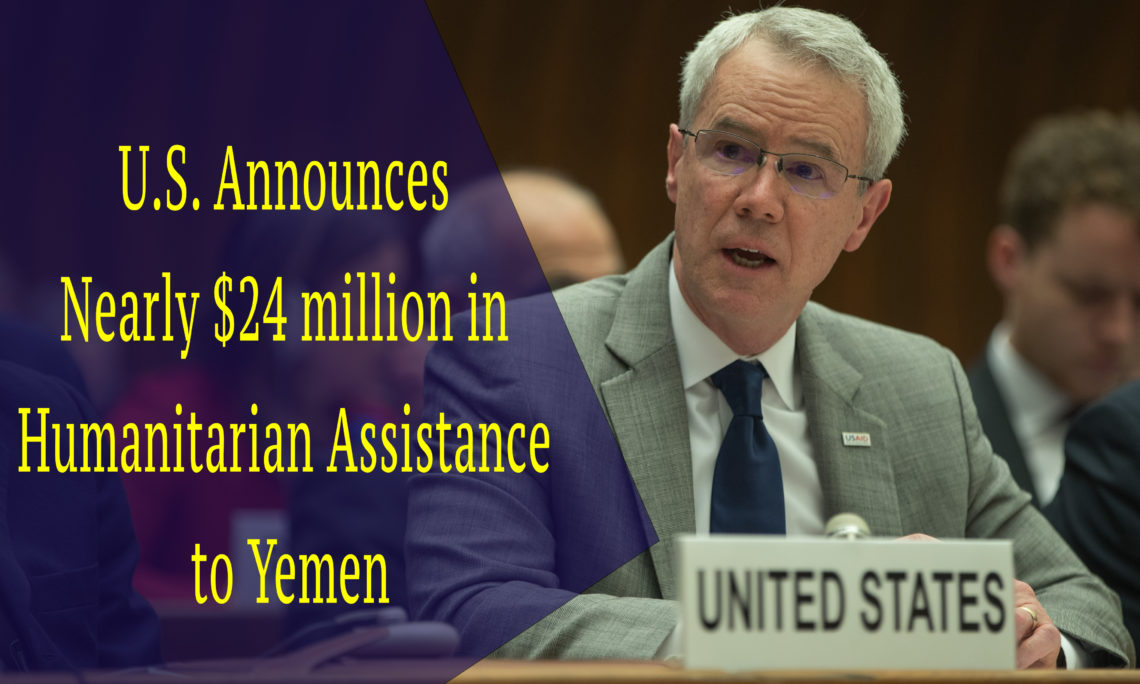 Today, the United States announced nearly $24 million in additional emergency aid to the people of Yemen, who face the world’s largest humanitarian crisis. This funding brings the total humanitarian assistance provided by the U.S. Government for the Yemen response to nearly $721 million since October 2017.

More than 24 million people in Yemen — nearly 80 percent of the population — are in need of humanitarian assistance. The new funding will purchase emergency shelter and relief items, among other supplies, for displaced Yemenis and refugees who are living in Yemen, and support critical coordination and logistics services to ensure aid continues to reach the most vulnerable. This funding complements ongoing U.S.-funded humanitarian assistance activities that reach nearly eight million people each month with health care, safe drinking water, treatment for malnourished children, food, shelter, hygiene kits, and medical supplies to fight the spread of disease.

Nearly 20 million Yemenis do not have access to basic health care, and more than five million are one step removed from famine. Without continuing large-scale international humanitarian efforts, many more would face life-threatening hunger, and could die from preventable disease. It is critical that humanitarian supplies and commercial imports — especially food, fuel, and medicine — flow into and throughout Yemen freely, and without delay, and that humanitarian actors can deliver these goods safely to those in need.

On February 26, 2019, donors met in Geneva to pledge additional funding of $2.6 billion to assist vulnerable Yemenis. The United States is one of the largest donors of humanitarian assistance to the Yemen response and remains committed to helping the people of Yemen. The United States thanks all countries that announced major contributions today, including the significant contributions of Saudi Arabia, the United Arab Emirates, and Kuwait, and calls on other donors around the world to respond to this urgent crisis and its rapidly growing needs.

However, no amount of humanitarian or development assistance will end this conflict and the suffering of millions. An enduring solution will only come through a comprehensive political agreement that allows the people of Yemen to determine a secure and prosperous future.