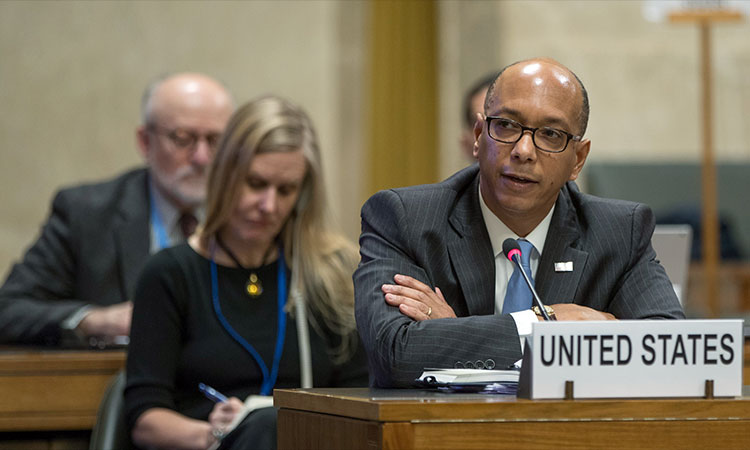 Remarks before the Conference on Disarmament Plenary Session

I’m taking the floor to put on the record my government’s strong opposition to a representative of the former Maduro regime occupying the seat reserved for Venezuela.  The Maduro regime is illegitimate, having stolen an election from the Venezuelan people; having bankrupted the country’s economy; having forced millions of its citizens to flee the country; and continuing to deny Venezuelans the humanitarian supplies they so desperately need.

The regime says there is no humanitarian crisis, just simply a mirage being created by the United States.  The regime will go to any length to lie and deny reality.  It even made one of the most outrageous charges the international community has heard in decades: that the United States is sending in biological weapons as part of humanitarian assistance we have provided.  Biological weapons?  Really?  Does the regime actually believe anyone is taking those absurd claims seriously?  Maybe only those countries that continue to prop up the regime and come to its defense in international bodies believe it.  And we all know who those countries are.

A number of countries represented in this chamber have recognized Juan Guaido as the legitimate and rightful president of Venezuela.  And the number of countries that recognize Guaido is increasing daily.  I raise the issue, Mr. President, because Venezuela is scheduled to assume the CD presidency in a few months.  Having a representative of the former Maduro regime presiding over this august body would be a travesty, further undermining the credibility of the CD following the disastrous Syrian presidency last year.  In order to preserve the integrity, dignity and respect for this chamber, Maduro representatives must vacate the chair reserved for the government of Venezuela.  I call on ALL responsible countries represented in this room to stand with the people of Venezuela by calling on Maduro’s sycophants not to assume the presidency of the CD later this year.  Let us not give one iota of legitimacy to this decrepit, dictatorial regime.  Let’s send a powerful message to the Venezuelan people and to other people seeking freedom around the globe that the CD is unwilling to continue business as usual with representatives of such a cruel regime presiding over the important work of our conference.