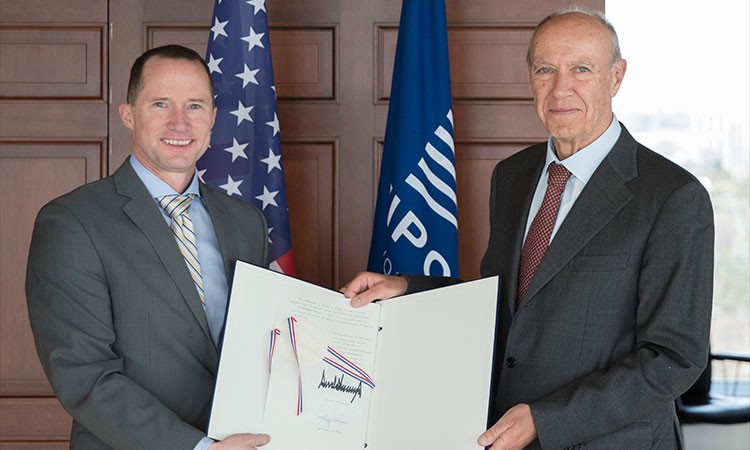 U.S. Deposits Instrument of Ratification to the Marrakesh Treaty

The United States today deposited the instrument of ratification to the Marrakesh Treaty, a landmark treaty which will help reduce the global shortage of print materials in accessible formats such as Braille for blind, visually impaired and print disabled persons.

U.S. President Donald J. Trump signed the Marrakesh Treaty ratification document in late January.  The instrument of ratification were received at the World Intellectual Property Organization by WIPO Director General Francis Gurry from Mark Cassayre, Chargé d’Affaires of the U.S. Mission to the United Nations in Geneva, on February 8, 2019.

The brief ceremony at WIPO today begins the 90 day countdown until the treaty’s entry into force in the United States.  When the Treaty takes effect in the U.S. in three months, some 550,000 accessible texts will become immediately available to visually impaired persons living in Marrakesh Treaty-adherent countries, according to figures from the U.S.-based National Federation for the Blind.

“The Marrakesh Treaty is first of all about people,” said Mark Cassayre, “When you think that less than 10 percent of printed material is accessible to the blind and visually impaired, you instantly recognize that you need to do something to change that.  Think about what it will mean for visually impaired students to have broad access to educational materials, or for blind adults to be able to obtain resources in Braille or audio editions. This treaty has the potential to make a very real difference in the lives of millions of people, and the United States is very proud to be a party to it.”

The following is the text of the U.S. Patent and Trademark Office (USPTO) Press Release issued after signature of the treaty:

WASHINGTON – The United States Patent and Trademark Office (USPTO) welcomed the recent ratification of the Marrakesh Treaty, which allows limited copyright exceptions for the reproduction of published works in formats accessible to the blind and visually impaired.

President Donald J. Trump signed the documents for the U.S. to ratify the Marrakesh Treaty to Facilitate Access to Published Works for Persons Who Are Blind, Visually Impaired, or Otherwise Print Disabled on January 28, 2019.

“I’m proud of the USPTO’s efforts in the negotiation of the Marrakesh Treaty, and the opportunities that it creates for the blind and visually impaired community,” said Under Secretary of Commerce for Intellectual Property and Director of the USPTO Andrei Iancu. “This treaty establishes an important mechanism to both protect intellectual property rights and expand access to information and resources.”

The treaty was adopted in Marrakesh in 2013 under the auspices of the World Intellectual Property Organization (WIPO). It became effective on September 30, 2016, and currently has 48 countries as members. U.S. nationals will be entitled to the benefits it provides in all of those countries, once the treaty documents signed by the president are formally deposited at WIPO and the treaty enters into force for the U.S. 90 days later.

The Marrakesh Treaty is largely modeled on existing U.S. law. It is intended to reduce the global shortage of print materials in accessible formats for the many millions of persons who are blind, visually impaired, or have other print disabilities (such as physical limitations that prevent holding a book).

The treaty ensures, with appropriate safeguards for publishers, that copyright restrictions will not impede the creation and distribution of copies of published works in special formats accessible to these individuals. It also fosters the cross-border exchange of such copies internationally, allowing eligible U.S. citizens to obtain currently unavailable access to books published abroad.

Current materials on the implementation of the Marrakesh Treaty in U.S. law are available on the Copyright Office website at https://www.copyright.gov/international-issues/.