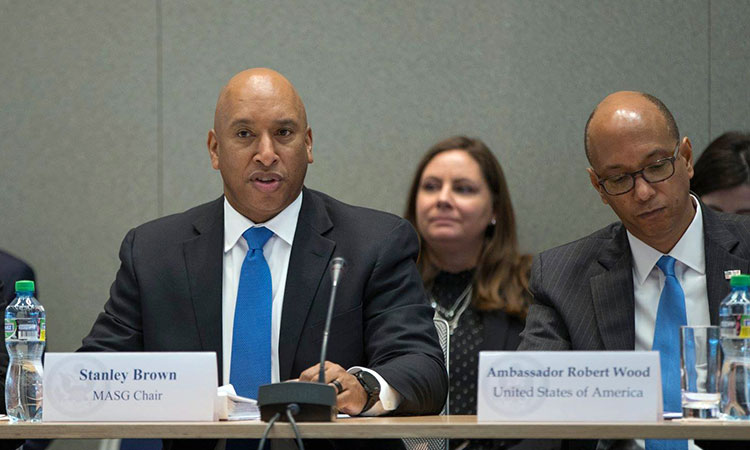 Ambassador Robert Wood hosted a meeting of the Mine Action Support Group (MASG) February 6, 2019 at the U.S. Mission to the United Nations in Geneva. The meeting was chaired by Stanley Brown, Director for the Office of Weapons Removal and Abatement, Bureau of Political-Military Affairs, U.S. Department of State.

The United States currently holds the chairmanship of MASG, a group of over 30 donor states working together to coordinate humanitarian mine action programs and increase mine action where it is most needed. A number of international organizations also attend as observers. “One of the reasons the United States wanted to chair the MASG is that the global need for conventional weapons destruction programs continues to outstrip available resources,” Director Brown said. “Therefore, our effort over the past year has been to deepen our understanding of each other’s priorities and to better identify funding sources in an effort to maximize the impact of available resources.” Speaking at the opening of the meeting, Ambassador Wood described the effort as “a model for how different actors, whether governmental or non-governmental, can work together toward a common end.”

Since 1993, the United States has invested more than $3.2 billion for the securing and safe disposal of excess small arms, light weapons, and munitions as well as the safe clearance of landmines and explosive remnants of war in more than 100 countries, making the United States the world’s single largest financial supporter of conventional weapons destruction. Learn more about U.S. Conventional Weapons Destruction (CWD) programs in the State Department’s “To Walk the Earth in Safety” report: https://www.state.gov/t/pm/rls/rpt/walkearth/2018/index.htm