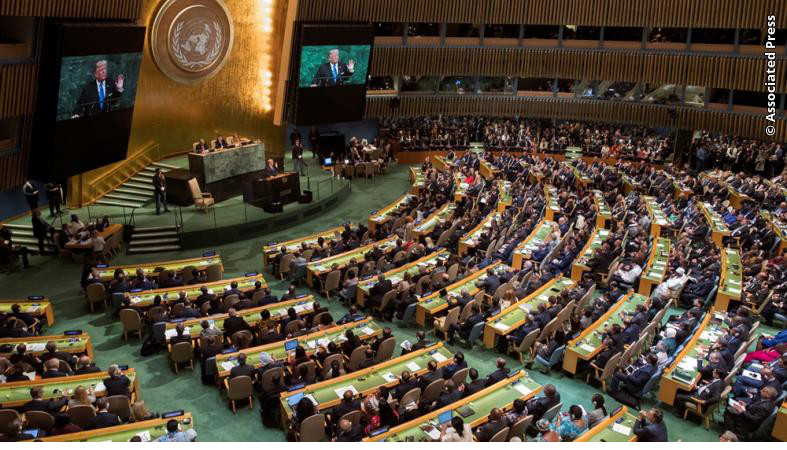 On Tuesday, September 25, President Donald J. Trump will address the United Nations General Assembly at the United Nations, in New York City.  The President’s remarks will be streamed on WhiteHouse.gov/live and the White House’s Facebook page.  Later in the day, Secretary of State Michael R. Pompeo will deliver remarks at the United Against Nuclear Iran Summit.  The Secretary’s remarks will be streamed live on state.gov and the Department’s Facebook page.

The President and the Secretary will also participate in a number of bilateral meetings on Tuesday. The public schedule for Tuesday is available at State.gov and you can follow @StateDept for updates.

The United States welcomes the nations of the world to New York for the 73rd annual UN General Assembly.  We urge them to come with a renewed dedication to meaningful diplomacy and a readiness to share the responsibility of global leadership that the United States has long shouldered.  As the President underscored in his address at last year’s UNGA, nations of the world must take a greater role in promoting secure and prosperous societies in their own regions.

The United States will be actively engaged across the full spectrum of UNGA events and activities.  We will focus our UNGA engagement on five policy priorities: (1) nonproliferation; (2) humanitarian assistance and food security; (3) peace and security; (4) counterterrorism; and (5) UN reform.

The United States firmly believes that the UN must play an important part in addressing the causes of conflict and responding to its destructive impacts.  We continue to assert our leadership at the UN Security Council and across the community of international organizations in order to protect the American people, promote our nation’s prosperity and values, and improve the prospects for lasting global peace.

Threats to peace and security come in many forms, including deteriorating human rights environments, natural disasters, terrorism, and criminal activities.   These threats demand nimble, adaptable, and sustained responses.  Such responses need to be broader than the provision of humanitarian assistance, which continues on a path of increased global need that prevents countries from pursuing their own development, not to mention preventing forcibly displaced persons and conflict victims from raising their children in peace.

At UNGA, the United States looks forward to the opportunities to discuss with member states actions that could improve the UN’s ability to address the complex and varied threats to peace and security.  The President also convened a meeting with the Secretary-General and numerous heads of state and issued a joint Global Call to Action on the scourge that is drug trafficking and abuse that harms the health and security of all nations.