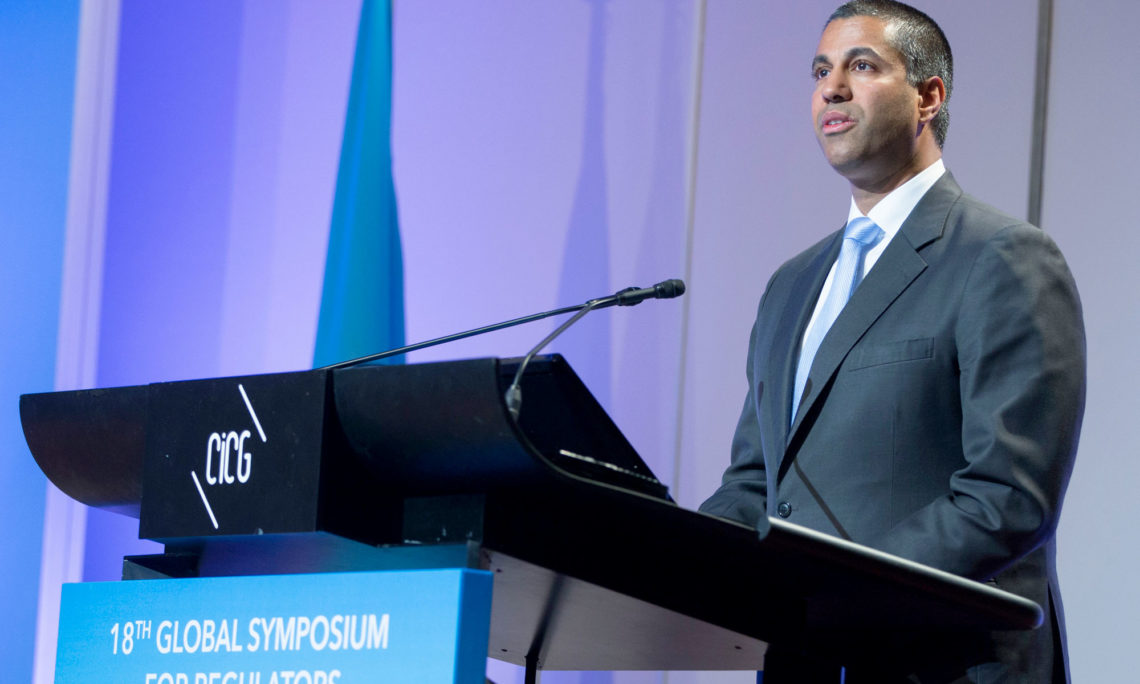 Good afternoon!  It’s great to be at GSR-18 and a part of this discussion on Artificial Intelligence and Emerging Technologies.

Thank you to Director Brahima Sanou and the ITU for facilitating this week’s discussions.  I appreciate Director Sanou’s singular focus on bringing the benefits of technology to billions around the world.

And I’m especially grateful today for the opportunity to share my ideas with and learn from my colleagues from around the globe.  For instance, I appreciated hearing from GSR-18’s Chairman Sorin Grindeanu.  I also welcome the insights of our fellow panelists, Mr. Mohieldin and Ms. Lauterbach, who literally wrote the book on artificial intelligence.

If it feels like we’ve been talking about the possibilities of AI our whole lives, it’s because we have.  The term was coined over 60 years ago by a professor in the United States at Dartmouth College, which hosted the seminal workshop on AI back in 1956.  In his proposal for that conference, Professor John McCarthy stated that the conference was “to proceed on the basis of the conjecture that every aspect of learning or any other feature of intelligence can in principle be so precisely described that a machine can be made to simulate it.”

Well, after decades of talk about AI’s potential, we’ve finally begun to see its practical applications.

Here is one example.  At the FCC, each year we have a program through which we recognize the developers of new communications technologies to assist people living with disabilities.  One of this year’s winners sounds like something from a science fiction movie, but it’s very real.  Microsoft has developed an app that uses AI and deep learning tools to narrate the visual world—describing nearby people or objects with spoken audio or real-time text for those with visual impairments.  The app’s name, appropriately enough, is Seeing AI.

Of course, AI is transforming other sectors, too, like commerce, healthcare, education, energy—basically every part of our economy and society.

Just a few weeks ago, McKinsey released a new analysis of smart cities that quantifies some of the potential of combining AI and ubiquitous high-speed connectivity.  Looking only at digital technologies that are commercially available and deployed in real-world settings, McKinsey determined that smart city applications like optimized dispatching and intelligent traffic signals could speed emergency response times by 20%-35%, and reduce commuting times by an average of 15%-20%.  Remote patient monitoring and other digital health tools can reduce the burden on healthcare facilities by 8%-15% while saving lives.  The report also projects that these technologies will result in more jobs, fewer crimes, and a cleaner environment.  And again, this is just looking at the applications that already exist.

Studies like this help explain why I announced recently that the FCC would hold a forum on the impact of artificial intelligence and machine learning on the communications industry later this year.

And more broadly, the United States is looking to establish a policy environment that encourages the development of these new technologies and the high-speed networks that will be critical to delivering those technologies’ potential.

Let me briefly highlight some of the ways we are doing that.

First:  When dealing with new technologies, I believe that one of the foundational principles for government should be regulatory humility.  History tells us that emerging technologies will evolve in ways that people don’t anticipate.  This makes it foolish and counterproductive for government to micromanage—or more accurately, try to micromanage—their future.  There is often a strong temptation to regulate new technologies, especially by forcing them into old frameworks.  But my strong belief is that government should resist pre-emptive regulation when there is no market failure or consumer harm.  One should not broadly regulate based solely on anticipation.

Regulatory humility also means that government shouldn’t pick winners and losers in the marketplace.  The best way to maximize the benefits of new technologies is to promote a competitive marketplace and let market forces work.  Promoting competition means technology-neutral rules that don’t protect the market position of incumbents.  For instance, the FCC has modernized the rules for its universal service subsidy programs to make new entrants like electric cooperatives and satellite providers eligible to receive funding to provide broadband to unserved areas.

Second:  In addition to regulatory humility, a guiding principle for the FCC is that government should facilitate, not frustrate, innovation and investment.

That’s why the FCC has launched an across-the-board review to identify regulations that need to be revised or repealed altogether.  In particular, we’re cutting regulatory red tape that holds back infrastructure deployment.  For example, we’ve instituted reforms to speed the deployment of 5G wireless networks.  These networks will help usher in emerging technologies such as AI.  As you know, the wireless networks of the future will be more densified than the networks of today.  Our rules should adjust accordingly.  A small cell should not have to clear the same regulatory hurdles that apply to a 60-meter-tall tower.  Otherwise, 5G services would never come to be.  To avoid that outcome, we recently decided that small cells would no longer face the same federal approval processes designed for traditional, large towers.

Beyond cutting rules that slow network buildout, we’re promoting investment in next-generation networks with a smarter regulatory approach.  I often say that dumb pipes won’t deliver smart cities.  That’s why we reversed the previous Administration’s decision to impose 20th century utility-style regulations on our 21st century networks.  In its place, we have restored the market-based, flexible, light-touch network approach that governed the Internet for much of its existence.  This framework will protect a free and open Internet.  It will also encourage the investment and innovation necessary to realize the promise of next-generation technologies, such as AI.  In addition to this, we’ve modernized rules that required investment in maintaining out-of-date copper networks.  This will direct more investment toward the resilient networks of the future, not the fading networks of the past.

Third:  Perhaps the most important way that the FCC facilitates innovation is by freeing up spectrum for wireless services and making it available for flexible use.  If I listed all of the ways we are making low-band, mid-band, and high-band spectrum available, it would eat up more than the remainder of my time.  But I would like to make a couple of high-level points about our spectrum agenda.

For another, we are not only freeing up spectrum, we are promoting experimentation to encourage emerging technologies that use that spectrum.  As part of what we call our Spectrum Horizons proceeding, for example, we’ve proposed a new class of experimental licenses above 95 GHz that would give innovators greater flexibility to see what works.

Here in the ITU, we have an opportunity to work together toward international radio spectrum allocation and harmonization for next-generation terrestrial mobile and satellite services.  This will help ensure that AI and other emerging technologies are promptly introduced into the marketplace.

Fourth and finally: A key part of our approach to emerging technologies is universal access.  My top priority as FCC Chairman has been making sure that every American can benefit from the digital revolution.  To that end, among other steps, we’ve reformed our universal service programs to direct billions of dollars in investment to connect unserved communities in the U.S and to do so efficiently.

The FCC is making progress, but we still have work to do.  And that is obviously true around the world, as billions remain unconnected.  As we think about these emerging technologies, and the theme of new regulatory frontiers, our focus at the ITU should be delivering broadband connectivity for all.  That will help extend the promise of AI, blockchain, virtual and augmented reality, and other technologies to all, regardless of nationality or background.  Connectivity is the core of ITU’s mission.  It is where the ITU can have the most impact.  And unlike regulatory intervention—which can deter innovation and detract from scarce public and private resources—a focus on connectivity can unite us as we seek to promote more innovation and greater international unity.

Thank you, and I look forward to learning from and working with you to usher in the benefits of emerging technologies for all of our citizens.