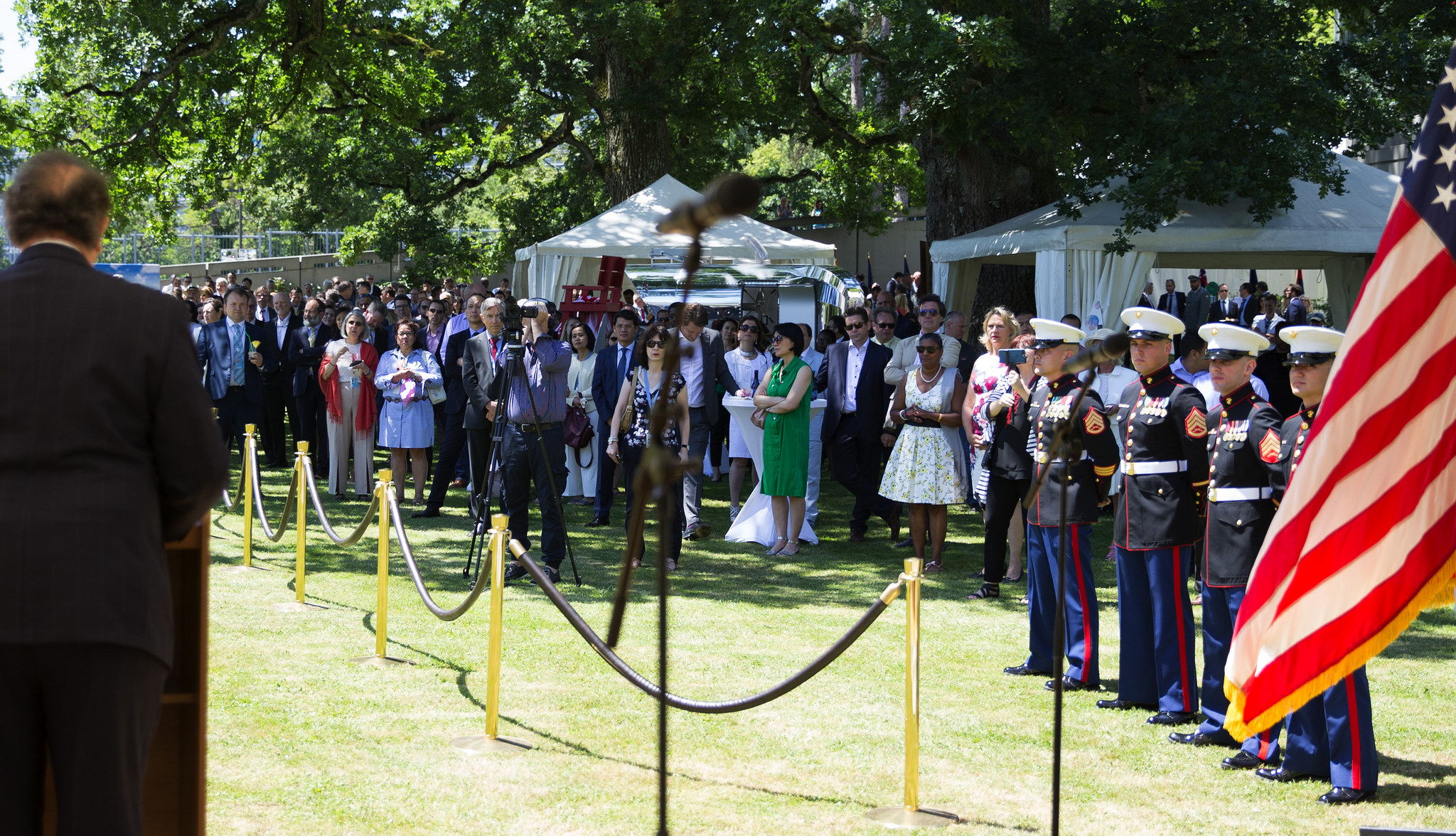 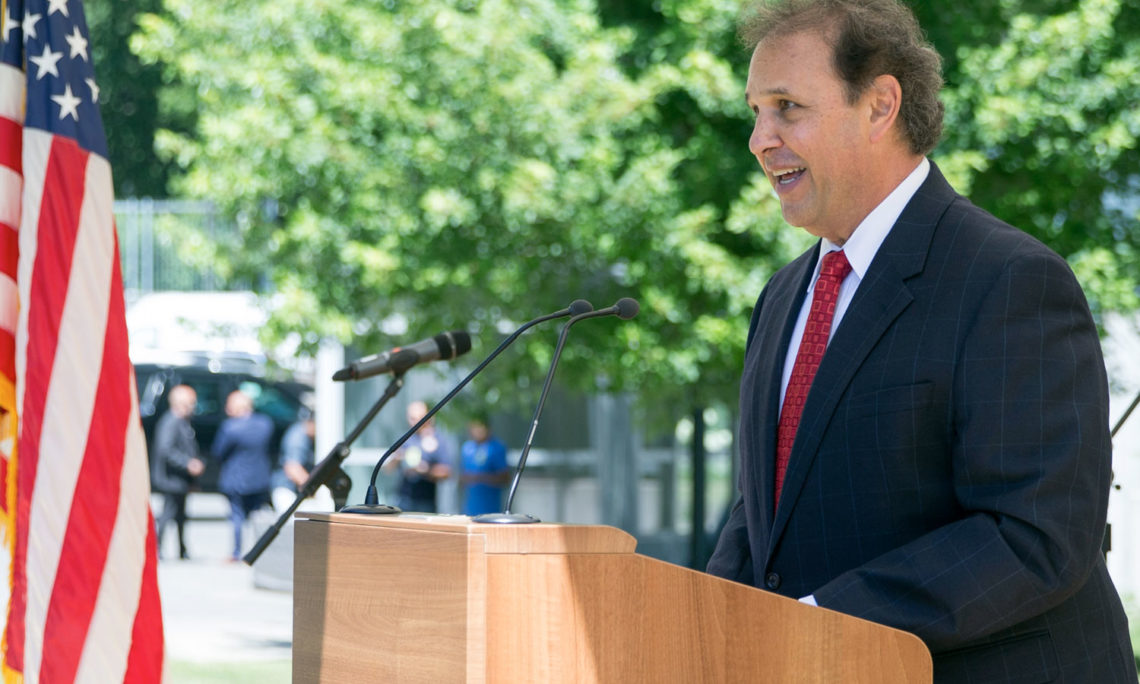 Chargé d’Affaires of the U.S. Mission to the UN and Other International Organizations
Geneva, Switzerland
June 28, 2018

Excellencies, distinguished guests, ladies and gentlemen, welcome and thank you for coming today to honor American Independence Day.  We are delighted to have you all with us.

I would also like to thank the Beach Boys Revival Band, as well as Cassie Frost, who sang our national anthem so beautifully.

As you can tell from the sights and sounds around you, the theme of our event this year is the culture of southern California.  The boardwalk, the surfboards, the classic cars, the beach food and drink, all reflect the iconic spirit of a place the world knows from film, from music, and from legend.

It’s a ubiquitous California vibe that defines the place so well, even though it’s tough to describe precisely what that means.

So, California.  The place that — along with the French Riviera of course — createdbeach culture.  A good part of the California vibe is that vision of ease that is seductive all over the world.

But it’s more than that.  California is also the place of firsts – for the rest of America and often for the world.  It’s where the Frisbee, the hula hoop, Barbie, skateboards, mountain bikes, and even the hot fudge sundae were created.

It’s where America’s first supermarket, first enclosed shopping mall, and first McDonalds opened; and it’s where the first freeway gas station catered to the California car culture.  And we brought some amazing vintage automobiles here today to facilitate your selfies.

At its best, California is known as the place where the future happens; a place alive with possibility and promise, and a place brimming with creativity and ingenuity.

California, to quote the writer Joan Didion, is a place of “hidden urgencies.”  A few decades back, Didion questioned the reason for that urgency driving endless innovation.  She surmised “a suspicion that things better work here, because here, beneath the immense bleached sky, is where we run out of continent.”

And that, perhaps, provides some insight into how to define that California vibe.  I mean how exactly does a place so prone to drought, to fires, to earthquakes, and to severe boom and bust cycles not only survive, but flourish?  If it were a nation, California would be the sixth largest economy in the world.

Most importantly, Californians are comfortable with risk — with the knowledge that failure is always an option.  But they don’t let it get to them, or as they say: “It’s nothing to freak out about.”  Steve Jobs, pioneer of Silicon Valley, said: “sometimes when you innovate, you make mistakes. It’s best to admit them quickly, and then get on with improving other innovations.”

And therein I think is a parallel to how the same California spirit is alive and well in international Geneva.  The UN is here now because Geneva was the location of the League of Nations, known historically as a notable experiment that did not work.

But the architects of the UN and the early secretaries-general learned from the failures of the League, in order to make an organization that was more (dare I say it) sustainable.

So we should not assume that the practices and successes of the UN during its first 70 years make progress inevitable for the future, at least not without sustained innovation and ingenuity.

Given the number of unprecedented challenges facing the world – from humanitarian disasters to refugee crises, to human rights abominations, to global health pandemics, and to intractable conflicts large and small – one thing is certain: our international institutions are being tested like never before.

Fortunately, Geneva is a place that exudes passion, creativity, energy, and ingenuity to define a future that has never been inevitable, or automatic.

Indeed, the “hidden urgencies” Joan Didion described are alive and well each day among the thousands of experts, hundreds of issues, and scores of organizations resident here.

We are passionate about our work because we believe in the human capacity to learn from our mistakes as well as our successes, and steer a better way forward for all.  We do so by bridging differences in cultures, differences in interests and differences in priorities.  And for the most part, we do it with grace, with humility, with passion, and even with humor.

So on this anniversary of American independence, it is that spirit we should all celebrate today. That spirit was described in the Declaration of Independence — a single aspirational document written 242 years ago.

It has defined the American experience from its beginnings – at the other end of a vast continent — transforming the status quo along the way.  And we must keep that spirit close in our hearts and minds, as Californians do each day, to create that future.

Finally, on a personal note, many of you know that my assignment to Geneva will come to an end in about a month, and that I will be moving on to another, but yet unknown, adventure.  More than anything, I have thoroughly enjoyed my time in Geneva because of you – the countless conversations to confront the countless challenges we have faced together.

At the end of the day, the best of our diplomacy are the personal relationships that matter most.  Thank you for making them so memorable, and so wildly productive.  I am grateful for your advice in times of uncertainty, your restraint in times of impetuosity, and your support in times of controversy. My admiration for your counsel and friendship is deep and sincere.

So, thank you again for coming today.  I hope you enjoy today’s beautiful weather – I dare say typical for a southern California summer – as we celebrate American independence together.