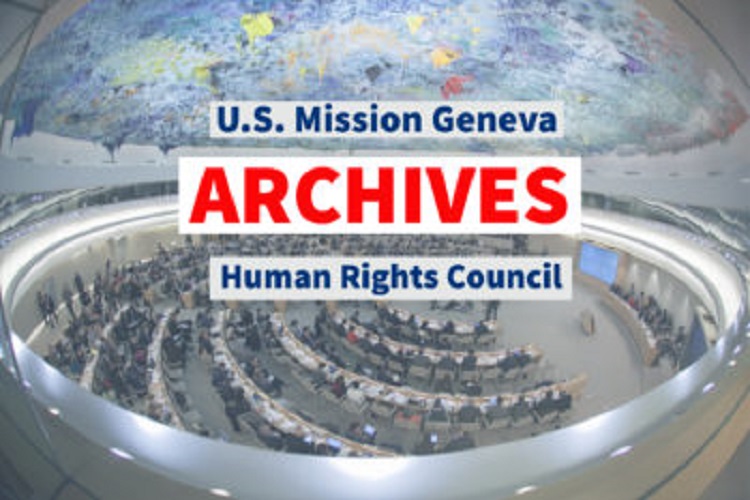 High Commissioner, the United States thanks you for your service and advocacy in addressing human rights and fundamental freedoms around the world over the past four years.

We condemn the Nicaraguan government’s violent response to peaceful protests that began in the country on April 18, as well as the beatings of journalists and attacks against local TV and radio stations.  We urge an immediate investigation by the independent interdisciplinary group of experts to investigate the deaths and violence in Nicaragua and that the government restore democratic processes and institutions.  We call upon the government to respect human rights and fundamental freedoms.

Civil society continues to face severe constraints in Egypt, including a highly restrictive NGO law.  We are deeply concerned by the shrinking space for independent voices and decreasing tolerance for peaceful dissent, including recent arrests of non-violent activists.

We urgently seek a political resolution to the conflict in Yemen that upholds the rights of all and call on all sides to take feasible precautions to minimize the risk of harm to civilians.  We condemn ongoing abuses by Houthi forces, including those committed against human rights leaders, journalists, and numerous Baha’i.

We are concerned by the ongoing severe restrictions on freedoms of association and expression, including for the press in Bahrain, including in the lead-up to elections.

We are concerned that the government of Sudan continues to violate civil and political rights and fundamental freedoms, including of expression, peaceful assembly, association and religion or belief, and reports of unlawful killings, torture, rape, and widespread impunity continue.

We are deeply troubled by the Government of Maldives’ ongoing attacks on democratic institutions and urge the president to let parliament and the judiciary function freely.  We further call on the president to return to a democratic path by allowing for an unrestricted and transparent process leading to a free and fair election in September.