U.S. Statement at the Universal Periodic Review of Cuba 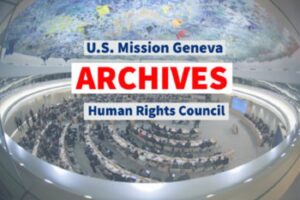 As Prepared for Delivery by Michele Roulbet

The April presidential transition again robbed the Cuban people of any real choice in shaping their country’s future; the same actors are in charge, many just with different titles, selected in a process that was neither free nor fair. The government stacked the system against independent candidates, none of whom were able to run for seats in the National Assembly, which selected the president.

The Cuban government continues to criminalize independent civil society and severely restricts the freedoms of expression, association, religion or belief and the right of peaceful assembly.  It routinely applies laws to silence journalists and critics, and punishes those working to expand access to information and freedom of expression for those in Cuba.

Finally, in an attempt to silence opposition voices, the government reportedly continues to use arbitrary and politically motivated detentions, torture, harassment, and travel prohibitions.  Recent examples of this include those who attempted to monitor the undemocratic presidential transition; those who have advocated for political change; and those who were prevented from participating in the 2018 Summit of the Americas in Lima and this UPR process.