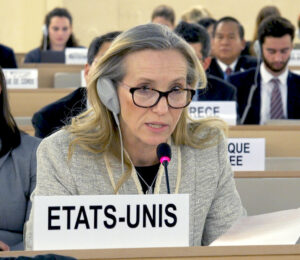 The United States is pleased to cosponsor today’s special session in order to shine an urgent light on the grave human rights abuses occurring in Burma. We appreciate the information shared by the High Commissioner, the Special Rapporteur, Pak Marzuki Darusman, and SRSG Patten and others who have brought to light shocking new details about the nature and scale of the violence.  We again call on the Government of Myanmar to provide access for the Fact Finding Mission and other UN mechanisms. We thank Bangladesh for organizing this session and for its generosity in receiving so many refugees fleeing for their lives.

The United States again condemns the August 25 attacks.   However, no provocation can justify the widespread and horrendous atrocities that have been perpetrated by Burma’s security forces against the Rohingya population.  The United States and other countries have deemed this to be a calculated campaign of ethnic cleansing.  As we have heard today, facts continue to come to light describing the events of recent months as possibly premeditated – including actions taken well before August 25.

These are neither isolated nor unprecedented behaviors by the Tatmadaw.  UN bodies have documented decades of similar, systemic abuses against ethnic communities across Myanmar.  Today in Kachin and Northern Shan State, tens of thousands of IDPs are suffering yet another winter of fear and deprivation. These ethnic groups have been virtually alone within Burma in speaking out against the treatment of the Rohingya because they know this brutality so well from their own experience.

The United States again calls on Myanmar authorities to respect the rights of its entire population, provide unhindered UN, humanitarian and media access throughout Burma, especially in Rakhine State, ensure justice for victims and accountability for those responsible for human rights violations and abuses, and take all necessary measures so that all persons can safely and voluntarily return to their places of origin.  We share the concerns raised by SR Lee regarding the repatriation agreement.

The United States welcomes the government’s commitment to implement the Annan commission report, including with respect to access to citizenship and reform of the discriminatory 1982 Citizenship law.  It is incumbent upon the security forces to respect these commitments, and to assist the civilian government in implementing them instead of undermining them. It is also essential that the hate speech, dehumanization and incitement to violence against the Rohingya come to an end. The lack of citizenship status and associated civil and political rights is the fundamental root cause of this crisis.   Addressing this is an urgent imperative for the government of Myanmar in order to create conditions allowing safe, voluntary and dignified return.  The first step in this is also to stop denying the seriousness of the current situation.

This Council, along with the Security Council and the General Assembly, all have an obligation to ensure that not one more Rohingya child will live through the violence we have seen in the past few months.  We must all come together now to focus now on securing their future.  Thank you, Mr. President.