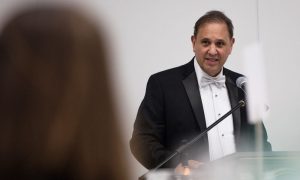 U.S. Mission to the United Nations and Other International Organizations

And welcome, or should I say welcome back, to our distinguished guest speaker, Chief Warrant Officer Five/ Raymond Grundy.  It is an honor to have you with us tonight, sir, some thirty years after your service in the Marine detachment here.

But I’m getting ahead of myself.  Tonight, I am honored, on behalf of the United States, to congratulate and celebrate the U.S. Marine Corps on its 242nd birthday.

As we do so, I’d like to reflect on three things about the Marine Corps: its history; its special relationship with the Department of State; and, most importantly, the Marines who serve in Geneva and carry on its proud tradition.

Ever since, Marines have won victories in some of the most celebrated battles in our history.  In the Marine Corps anthem, you hear lyrics about storming the “halls of Montezuma” during the Mexican-American War, and about routing the Barbary pirates on the “shores of Tripoli.”

But you could write many more verses about many more decisive battles where the Marines were the point of the spear for the United States, and where they won victories for the rest of the free world:  Bellau Wood in France; Iwo Jima in the Pacific; Chosin in Korea; Hue City in Vietnam; Desert Storm in Kuwait; Fallujah in Iraq; Helmand in Afghanistan.

At the toughest points in history, and in the moments that mattered most to the survival of our country or the ideals it stands for, the Marines were there.  As Ronald Reagan once said:  “Some people spend an entire lifetime wondering if they made a difference in the world.  But the Marines don’t have that problem.”

And there’s more.  As the United States expanded its presence to the furthest reaches of the globe, the Marines have been there as well to confront the unexpected, and to protect the United States.

That brings me to my second point: the Marines as part of a special relationship with U.S. diplomatic missions.

The partnership between the Marine Corps and the Department of State is over 200 years old.  Since 1798, Marines have rescued diplomats in distress, couriered secret documents, and provided an impenetrable line of defense for American diplomacy.

Whenever and wherever the American flag comes down and embassies are evacuated — in conditions that are too dangerous for mere mortals — the Marines make it safe for America’s diplomats and their families to get out.  In Saigon, in Mogadishu, in Monrovia (3 times), in Freetown (twice), in Tirana, in Tripoli, and in Juba.

Nearly seventy years ago — after a special Marine detachment was assigned to Embassy London during World War II — the relationship became official.  Since then, Marines have been deployed along with U.S. diplomats in places of peace and in places of war.  Every day, 24/7, at nearly 200 diplomatic missions overseas, Marines protect U.S. government personnel and its property.

But why is it the Marines – the smallest of our military services — with whom we have this special relationship?  I’m sure that scholars can expound on the complexities to that question.  But I actually think there is a simple answer as well.

It is tradition:  it is the Marine Corps’ trademark warrior spirit, its excellence in combat, its will to win, its hallowed rituals, its unbending code of honor, and its profound devotion to one another.  It’s tradition that makes a Marine a Marine.

And I think most Americans instinctively know this.  Think about it.  How do people describe their military service?  You often hear:  “I’m in the Army,” or “my son wants to be in the Navy,” or “my father was in the Air Force.”

And that’s the difference; that’s what reflects the embodiment of tradition that defines a Marine.  The simple fact of being a Marine means everything, and it means so much more than anything else.

So, to my final point, that’s what we have here in Geneva.  Those with whom we celebrate tonight are of a special caliber. We have a talented, hard-working group of men who are Marines.  They show us by tradition, and by example, every day what that means.  As General (now Secretary) James Mattis once said:  they “think like men of action, and [they] act like men of thought.”

Beyond what we see every day, there are a few things to highlight about them.  First and foremost, Sgt. Antunez just got married; congratulations!  Sgt. Lee and Sgt. Betancourt have become blacksmiths and have the forged knives to prove it.  The detachment recently ran a 20km race, and Cpl. Crispin — the stealth ringer among them — was the clear winner.  And Sgt. Betancourt has achieved Gold airline travel status through his particular brand of expeditionary campaigns to places near and far.

And of course, Gunnery Sergeant Delmont, who is one of if not the top detachment commander in the entire European region.  I know that because they have told me so – repeatedly — even though I’m sure they have not told him.  And because this is his final Marine Ball in Geneva, I’m going to elaborate a bit more for you all.

Nearly seven years ago today, Staff Sgt. Delmont and his company were about to go home from Afghanistan – not from just anywhere, but from a place called Sangin.

Now Sangin is notorious as the deadliest battleground in that war zone.

At the time, Secretary of Defense Robert Gates said it was one of the most dangerous places “not just in Afghanistan, but maybe in the whole world.”  Indeed, more British troops and American Marines gave their lives in Sangin than anywhere else in Afghanistan.

It was the last day of the final mission for his company, and Sgt. Delmont’s team was getting ready to meet the helicopter that would fly them all to Camp Leatherneck; from there, they would head home to the United States.

But things started to explode around them, and they were suddenly under attack.  Taliban insurgents were firing machine guns, and handheld and rocket-propelled grenades.  The entire company was pinned down in a makeshift compound, and there was no way out.

But Delmont knew how to play with fire.  And he knew how to react quickly, and with calmness, precision, and good judgment.  He assembled explosive charges on one wall of the compound, and he then blew it up in a spectacular show of pyrotechnics – confusing the enemy and creating an exit route for his team at the same time.

The company bolted up a nearby hill and joined another group of soldiers engaged in suppressive fire.  The helo landed, it got them all out safely, and nobody got shot.

Now, Gunny will deny that he made a difference; he will say there were others involved.  I’m sure that’s true, of course.  But I’m also sure that, in hearing his denials, you are listening mostly to the tradition talking.

But there is no denying that we are in the presence of greatness tonight; a truer leader for our detachment, and indeed for us all, would be hard to imagine.

So let us remember that tonight is also about saying thank you to them, to each of the Marines who serve Mission Geneva so well.  We honor them because of their service, their special mission, and their dedication to our safety and security.  And we celebrate with them because they are also our colleagues and our friends.

And a special thank you to Tony from New Jersey.

Individually and collectively, you are part of who we are, and you are part of what we do.  And to everyone who enters our Mission, you stand as a symbol of American values of honor, of integrity, of courage, of loyalty, and of commitment.

Whether you have been here for one week or one year, you make us very proud.

And for that, for continuing a tradition 242 years in the making, we are all grateful.