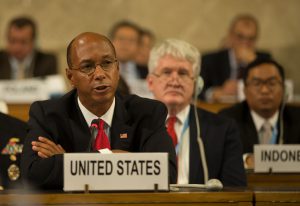 As prepared for delivery

I have requested the floor in today’s Plenary meeting to address the undeniable threat North Korea poses to international peace and security.  This Conference is a critical forum for addressing the major arms control, nonproliferation, and security problems facing the international community, and there is perhaps no bigger challenge to the global security environment than North Korea’s continued development of prohibited weapons programs and its increasingly provocative and dangerous actions.  We are not here today to debate the dangers posed by North Korea’s UN-proscribed nuclear and ballistic missile programs.  The time for debate has long passed; those dangers are clear; and it is now time for concerted action.

North Korea’s proscribed programs have advanced rapidly, far outpacing our initial estimates and expectations.  In response to the increasing threat, the United States, the Republic of Korea, and Japan have taken necessary measures to increase our capabilities to deter and defend against any attack from North Korea.  Together with the international community, we have redoubled diplomatic and economic efforts to show North Korea that the only path to a secure, economically-prosperous future is to abandon its nuclear and ballistic missile programs; but our efforts will only be successful with the full cooperation of the international community, and nations willing to use decisive leverage against North Korea’s increasingly dangerous and destabilizing actions.  If there is any doubt or question as to the urgency of this matter, the unrelenting pace of North Korea’s nuclear and ballistic missile tests, including its July 4 and July 28 ICBM launches, demonstrates why the United States, the Republic of Korea, Japan and our partners must take timely action to deepen diplomatic and defensive military cooperation.  North Korea’s actions underscore the collective responsibility of every country represented in this room, to hold nations accountable to their commitments to isolate the regime.  All UN member states have a responsibility to fully implement their UN Security Council Resolution (UNSCR) obligations and take additional actions to put diplomatic and economic pressure on North Korea.

The unanimous adoption of United Nations Security Resolution 2371 on August 5 signaled the unwavering resolve of the international community to condemn North Korea’s continued violations of international law and demand North Korea give up its prohibited nuclear and ballistic missile programs.  By tightening the web of sanctions around North Korea, both through UN measures and autonomous steps, we aim to increase significantly the cost of North Korea’s weapons programs, reduce the resources available to support its WMD proliferation activities, and impede its ability to acquire dual-use technology.  The goal of using such sanctions is to pressure the government of North Korea to abandon its prohibited programs and activities, not to punish the people or economy of North Korea or other countries.  Full enforcement of the sanctions by all states will be necessary to achieve the maximum pressure needed to bring North Korea into compliance with its UN obligations.

U.S. policy toward North Korea is clear.  The United States does not seek regime change; the collapse of the regime; an accelerated reunification of the peninsula; or an excuse to send troops north of the Armistice Agreement’s Military Demarcation Line.  We do not seek to be a threat to the Kim Jong Un regime. However, we must respond to the serious threats it makes toward the United States and to our allies.  We want to be clear to North Korea that the United States has the unquestionable ability and unbending will to defend itself, and its allies.

Our routine combined-joint military exercises with the ROK and Japan, and the deployment of THAAD have been heavily criticized by some countries in recent months.  We firmly reject any false equivalency between North Korea’s illegal nuclear and missile programs, which are enormously destabilizing and have been repeatedly condemned by the UN Security Council, and our long-standing joint activities with our allies, which are transparent and defensive in nature.  Using discussions about North Korea to criticize U.S.-ROK-Japan joint military exercises and THAAD deployments is not helpful and only serves to encourage North Korea to continue its destabilizing activities.  Our actions are measured and responsible, and the international community must speak with a unified voice against North Korea’s destabilizing actions, not create counter-productive equivalencies that cannot serve as the basis for future discussions.

Which leads me to prospects for dialogue with North Korea:  The United States remains open to talks aimed at denuclearization and we have consistently stated our willingness to engage with Pyongyang.   However, North Korea’s statements and its unlawful and escalatory actions, including its two ICBM launches, and its multiple ballistic missile launches just this past weekend, send a clear signal that Pyongyang has no interest in returning to serious dialogue at this time.  As U.S. Secretaries of State and Defense, Mr. Tillerson and Mr. Mattis, recently reaffirmed it is “incumbent upon the [Kim Jong Un] regime to signal its desire to negotiate in good faith.  A sincere indication would be the immediate cessation of its provocative threats, nuclear tests, missile launches and other weapons tests.”

Distinguished colleagues, the presence of experts from Washington here today reflects the United States’ great concern over the current situation with North Korea, and signals our commitment to address the threat.  Our collective attention to this matter underscores the value of the CD as a forum to discuss international security and the nonproliferation challenges that affect all of us and explore ways to enhance our cooperation to increase security and defend our shared values and a rules-based global order.

I would now like to turn the microphone over to CAPT Murzban Morris from our Department of Defense Joint Staff to help further explain the U.S. response to the threat North Korea poses to international peace and security.