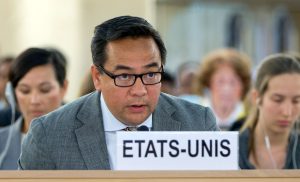 We thank the High Commissioner for his interim report requested last September detailing the progress Sri Lanka has made, and the important work that remains.  We look forward to receiving the full report next March.  In the interim we encourage the government of Sri Lanka to make continued tangible steps in fulfilling their commitments reflected in Resolution 30/1 and elsewhere to credible justice, accountability, and reconciliation mechanisms.

We share the High Commissioner’s concern about the spike in violent extremist attacks against vulnerable communities in Bangladesh.  We continue to call upon the government to investigate and hold accountable perpetrators of such acts in a manner that respects human rights.

In Bahrain, we acknowledge progress implementing some reforms, but remain concerned, as the High Commissioner’s report noted, regarding limitations on peaceful assembly, expression, and political activism. We emphasize the importance of political reconciliation.  Recent actions, including lengthening of the sentence of Sheikh Ali Salman on appeal, the detention of human rights activist Nabeel Rajab, and the shutdown of Wefaq political society and the revocation of citizenship of Sheikh Issa Qassem, undermine these efforts.  The reaction of Bahrain’s government to call the High Commissioner names does not indicate an appropriate degree of seriousness about addressing human rights concerns.

The Government of Sudan’s efforts to restrict freedoms of expression, peaceful assembly, association, religion, and movement reinforce concerns the High Commissioner’s report raised.  We deplore efforts to intimidate and close human rights and nongovernmental organizations, as well as the Government’s heavy-handed efforts to crack down on student protestors through reported extrajudicial killings and other forms of violence and arbitrary detention.

In Uzbekistan, Tajikistan, and Turkmenistan, we remain concerned by harsh restrictions on civil and political rights, including on the exercise of freedoms of religion and expression, often under the guise of countering violent extremism.