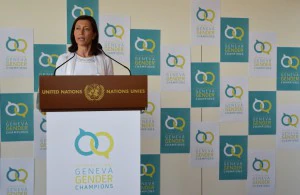 Thank you all for being here to kick off our Geneva Gender Champions initiative.  We know that it’s an incredibly busy week and your joining us here today means a great deal to us.

As Michael mentioned, today, he and I are jointly launching a new initiative focused on gender equality and the empowerment of women.  And we are asking you, as the decision makers and leaders in Geneva, to join us in making a personal commitment to do what you can to break down some of the systemic barriers that are preventing women from reaching their full potential, from having a true seat at the table, from contributing to society in all the ways we know they can if simply given equal opportunities to do so.

It is unacceptable that four decades after the first World Conference on Women, that 20 years after the Beijing Declaration and Platform for Action, I am standing before you presenting these representative statistics:
In the United Nations system, women represent only 30% of senior leadership.
Currently the labor force participation rate for women is 50%, compared to almost 80% for men.
Women hold less than 20% of board seats globally, and less than 5% of CEOs of the world’s largest corporations are women.
As of January 2015, only 10 out of 152 Heads of State and 14 out of 193 Heads of Government were women.
Now, as you heard from Michael, the commitments we are asking you to make are not just symbolic commitments.  But don’t get me wrong…the symbolism is indeed important.  Because you all know that what you do here, as Ambassadors and Heads of Organizations, has a multiplier effect out in the world.  You can help level the playing field for women and girls.  That’s what you, as head of your organization, are able to do.  And that’s what I feel you, as head of your organization, have a responsibility to do.

Again, as Michael mentioned, to become a Geneva Gender Champion, we are asking you to make 3 commitments.  The underlying premise of this initiative is not that it’s hard to make these commitments, but rather that it’s hard NOT to.  Because while we are asking everyone to sign on to the Gender Panel Parity Pledge (which I will explain in a minute), the other two institutional commitments are customized by YOU based on what works for your organization.

Going back to the Gender Panel Parity Pledge, we are not asking you to commit to only organizing or participating on panels that have 50-50 gender parity.  That would be unrealistic.  We are asking you to commit to STRIVING for gender parity, by implementing a process within your organization that will ultimately allow for more women’s voices to be heard.  The Panel Parity Pledge provides a tool to build awareness in our work by offering a series of questions for you to consider when invited to participate on a panel.  This tool will remind us all to make a concerted effort to seek diverse representation from both men and women in order to have fuller, more balanced discussions.

In the future, we hope to expand this leadership network to include leading NGOs and private sector partners who are interested in making similar commitments on behalf of their organizations.

It takes great partners like Michael to make meaningful change a reality.  He is dedicated to increasing gender representation in leadership positions, closing the gaps, empowering women and girls, and facilitating their involvement as equal members of society…and I’m happy to be joining forces with him on this important initiative.  And it’s truly an honor to have the opportunity to celebrate his official appointment as Director General and the launch of this initiative on the same day.  I find it very fitting given the leadership he has always shown as a true gender champion.

So again, thank you very much for coming, we hope you now have a better understanding of what we are looking for, and why your personal commitment is necessary if we are going to affect real, lasting change for women and girls around the world.

Thank you very much.  And now we’d love to answer any questions you may have.