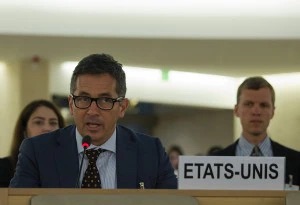 While member states are taking a more proactive position toward addressing violence against Lesbian, Gay, Bisexual, Transgender and Intersex (LGBTI) persons, homophobic and transphobic killings, and discriminatory practices continue to occur at alarmingly high rates in all regions of the world, including in the United States.  Recognizing the hard work yet to be done, we continue to make progress at home by adopting measures to combat violence and discrimination.  For example, we are implementing the Matthew Shepherd-James Byrd Jr. Hate Crimes Prevention Act and integrating openly gay servicemen and women into our armed forces.

Following former Secretary of State Clinton’s declaration in 2011 that “gay rights are human rights and human rights are gay rights,” the United States has continued to advance equality at home and around the world.My appointment as the first-ever Special Envoy for the Human Rights of LGBTI Persons signifies the United States’ commitment to safeguarding the rights of members of LGBTI communities everywhere.  Our commitment is also evidenced by President Obama’s recent Presidential Proclamation declaring June as Pride month, which outlines several strategies for eliminating discriminatory practices and strengthening protections for transgender persons.

We are not alone in exercising a commitment to make the world a safer place for people of various sexual orientations and gender identities. In this regard, the United States commends the leadership at the UN of many countries, including Colombia, Chile, Brazil, Uruguay, Argentina, and Mexico.  We are pleased to join Brazil in co-sponsoring a side event on human rights, sexual orientation, and gender identity at this session.

When we work together to protect and promote the human rights of all persons regardless of sexual orientation or gender identity, we come closer to the creation of a more equitable world for everyone.  As President Obama said welcoming the Supreme Court ruling, “if we are truly created equal, then surely the love we commit to one another must be equal as well.”