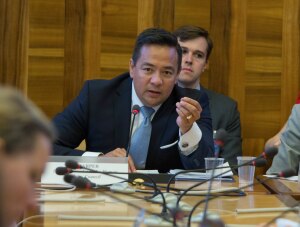 On behalf of the United States, it is my great pleasure to welcome you to today’s important discussion about Tibet and the human rights situation in Tibet.

I have the special privilege to introduce our Under Secretary of State for Civilian Security, Democracy and Human Rights, Sarah Sewall. Under Secretary Sewall also serves concurrently as Special Coordinator for Tibetan Issues.  This position was established by Secretary Madeline Albright in 1997, and codified into law by the Tibetan Policy Act in 2002.  It came about because of an interest in the U.S. government – both Congress and the Executive Branch – for a resolution to the issues related to Tibet and the human rights situation there.

The principle mandate of the position is to promote dialogue between the Chinese government and the Dalai Lama and his representatives.  The United States firmly believes that dialogue is the most promising path forward – and indeed in many ways, the only path which will likely lead towards a resolution.  Further, we are of the firm belief that such a path will be to the benefit of both the Tibetan people and to China.

‎Of course, ensuring that people around the world – in China, in India and everywhere – have information about Tibet is critically important. In that regard, it is plainly appropriate that we are having this discussion here, on the margins of the Human Rights Council, where discussion about fundamental freedoms is a core part of the work that we do.

As an indigenous person – a citizen not only of the United States but my tribal nation – the Cherokee Nation – I have a particular affinity for the issues faced by Tibetans.  In the history of our people, we faced times in the country I now represent, when our right to forge our own destiny and practice our own religion and speak our mines were too often denied or restricted.  So the stories which emerge out of Tibet have always rung with a certain familiarity.  It is a familiarity borne from the many stories I heard from my own relatives about our own history.

But some years back, America embarked on a different path with Native peoples – a path of truer autonomy, greater and far more authentic self-governance.  This ability for each tribal nation to forge its own path while remaining firmly part of the United States, has set the foundation for far greater social, cultural, political and economic success for tribal communities.  In addition, it has bred a steadfast patriotism in many Native people.  At the same time, it has made America far stronger.  And from this foundation, working in partnership, tribal communities better face the continuing challenges before them.

I don’t know what the precise right path for Tibet and China is.  But I do believe that finding that path will start with sitting down to dialogue in good faith.

Finally, a word on discussion we are having here today.  This discussion is intended to be constructive and, accordingly, is not about China-bashing.  That would not be productive.  As advocates of freedom of expression, we should be open to information from all points of view.  In that regard, I have invited representatives of the Chinese government to hear today’s presentation and to offer their viewpoint. I understand they are present and, of course, we will provide them an opportunity to comment during the question and answer period.

With that, I am pleased and honored to turn things over to her Excellency, our Undersecretary of State for Civilian Security, Democracy and Global Affairs, Sarah Sewall.