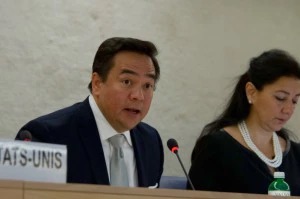 Mr. President, fellow Ambassadors and other representatives, colleagues, and members of civil society:

I am pleased to introduce the United States delegation for our country’s second Universal Periodic Review.  I present a delegation that includes senior officials from eight federal agencies and one state government.  This strong delegation illustrates the importance we place on the UPR process.

We believe that every nation benefits from having a mirror held before it.  Every nation has challenges, and can reach greater heights by participating seriously in the UPR.  This process provides us the vital opportunity to self-assess, to listen to others, and to more effectively address the concerns of individuals in our country.

We are here today with both pride and humility.  We are proud of our country’s record and our mechanisms to promote and protect human rights.  Among those, our legal system enables individuals to pursue claims when they believe that human rights have been violated or abused.

The American story is the story of a nation seeking to become more inclusive, more fair, and more just while ensuring the protection of core values such as fundamental freedoms of expression, assembly, association, and belief.

We very much appreciate your thoughtful participation today.  In that spirit, we welcome your honest assessments of our record.  We commit, without equivocation, to carefully consider all constructive recommendations.

I particularly want to highlight the participation of civil society in our review, and thank all of the members of U.S. civil society who came here today.

We will report today on a number of areas where we’ve worked to make progress since our last UPR.  I will begin with one example.

In 2010 a number of states made recommendations related to Indigenous peoples.  One was that the United States endorse the UN Declaration on the Rights of Indigenous Peoples.  On December 16, 2010, President Obama did indeed announce support for the Declaration, as further explained in the accompanying Statement of Support.

There has been a concerted effort to address challenges while adhering to the principles enunciated in the Declaration.  The United States has made significant advances working in partnership with tribal communities in areas including healthcare, community safety and law enforcement, education, economic development, and land rights.

In 2010, for example, the President signed into law the Tribal Law and Order Act to, among other things, empower tribal governments to safely and effectively provide public safety in Indian Country.  Then in 2013, to further address disproportionately high levels of violent crimes committed against Indigenous women, he signed into law the Violence Against Women Reauthorization Act of 2013.   Under this law, tribal courts can assert jurisdiction over non-Native Americans who commit certain violent crimes against Indigenous women.  This initiative is perfectly in accord with the overarching principal in the DRIP to involve Indigenous communities – indeed empower those communities to – address their challenges.

I will now hand the floor to my co-head of the U.S. delegation, the Acting Legal Adviser of the U.S. Department of State, Mary McLeod.