Statement by Acting Legal Adviser Mary McLeod at the UPR of the United States
By U.S. Mission Geneva
5 MINUTE READ 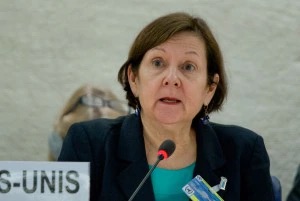 Distinguished President, Representatives of the U.N. Member States, my name is Mary McLeod; I am the Acting Legal Adviser of the U.S. Department of State.  On behalf of the United States, it is my honor and privilege to address you all as part of the Second U.S. Report in conjunction with the UPR.

Since our last UPR in 2010, we have carefully considered the recommendations we accepted from our fellow States and have taken many steps to implement them.

The desire to “form a more perfect union” is woven into our nation’s founding documents, and this same desire inspires our efforts to confront the challenges of today.  Indeed, the strength of our democratic system is that it allows for constant scrutiny, advocacy, and debate, which fuels progress and reform.

The progress that democracy, free expression, and civil society can achieve in the United States is illustrated by the battle against all forms of discrimination.

One form of discrimination we have worked to address, especially since our last UPR, concerns the human rights of LGBT individuals.

These issues have been the subject of wide-ranging discussion in our country, as in many others.  Peaceful demonstrations were held, public campaigns were launched, thoughtful articles were written, and the powerful words of civil society advocates echoed throughout our nation.  These voices were heard by our legislators and before our free and independent judiciary.  We have not shied away from the issue because it was challenging – we have embraced it.  At the core of these efforts is our belief that what is most important is to recognize the common humanity, the common human dignity, and the need for equal treatment of all people.

At the federal level, we have prioritized the fight to end violence and discrimination against LGBT persons.  We have prosecuted crimes motivated by bias, including those based on sexual orientation or gender identity.  We have put an end to the discriminatory “Don’t Ask, Don’t Tell” Policy in the U.S. Armed Forces.  We have prohibited discrimination against LGBT persons in federal employment.  And just last month, the President announced his support for efforts, including at the state level, to ban the use of conversion therapy for minors, or practices by mental health providers that seek to change an individual’s sexual orientation or gender identity.

At the state and local level, many important changes have also taken place.  In response to citizens’ demands, laws have been passed to prohibit employment discrimination based on sexual orientation and gender identity.  A combination of advocacy and litigation before an independent judiciary has paved the way for meaningful changes in public opinion and law on the issue of marriage equality, allowing equal access to numerous federal and state benefits.

As you will hear today, we have many successes to report, and we’re proud of the work we’ve done since our last UPR.  Still, we know we have faced challenges.  For example, in December the declassified summary of the Senate Select Committee on Intelligence report was publicly released, which detailed the former CIA detention and interrogation program.  As President Obama has acknowledged, we crossed the line, we did not live up to our own values, and we take responsibility for that.  We have since taken steps to clarify that the legal prohibition on torture applies everywhere and in all circumstances and to ensure that the United States never resorts to the use of those harsh interrogation techniques again.

As you will hear from my colleagues representing seven federal agencies and the State of Illinois, we continue to work through this and other human rights issues as a nation, and we look forward to hearing your questions, comments, and recommendations today.  There is more work to be done – there always is – but we’re proud of what we’ve achieved in our democracy to advance human rights.

With that, I’d like to once again thank the working group and all of the UN Member States present today, and I’ll turn the floor over to my colleague from the Department of Justice, James Cadogan.